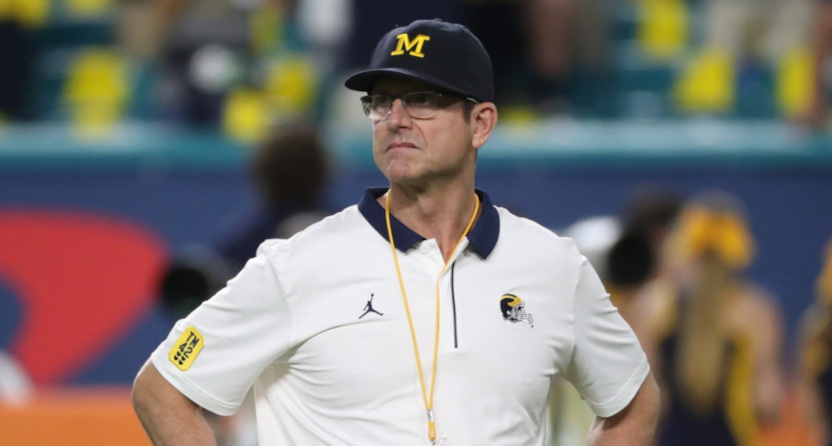 Michigan Wolverines’ head coach Jim Harbaugh has continued his outspoken comments against abortion, and he’s now offering to personally raise children resulting from unwanted pregnancies. Last week, Harbaugh was the keynote speaker at a fundraising dinner for pro-life charities, and his “Let the unborn be born” comments created a lot of discussion. On Saturday, Harbaugh again discussed the issue, and he took things a step further, saying he and his wife Sarah “will take that baby” if his players or staff are involved with an unwanted pregnancy that they don’t feel they can care for.

While Harbaugh made these comments Saturday as part of a wide-ranging interview with ESPN’s Gene Wojciechowski during a Wolverines’ event in Muskegon, Michigan, they only came to greater prominence Tuesday when ESPN.com published them (in an unbylined story put up at 12:06 a.m. Tuesday). Here’s the key part of what they published:

“Let’s discuss it,” Harbaugh told ESPN’s Gene Wojciechowski as part of a wide-ranging interview conducted Saturday in Muskegon, Michigan, during the team’s summer tour of the state, adding: “I’ve told [them] the same thing I tell my kids, boys, the girls, same thing I tell our players, our staff members. I encourage them if they have a pregnancy that wasn’t planned, to go through with it, go through with it. Let that unborn child be born, and if at that time, you don’t feel like you can care for it, you don’t have the means or the wherewithal, then Sarah and I will take that baby.”

…Said Harbaugh: “Any player on our team, any female staff member or any staff member or anybody in our family or our extended family … that doesn’t feel like after they have a baby they can take care of it, we got a big house. We’ll raise that baby.”

These remarks are certainly going to draw some further discussion around Harbaugh’s anti-abortion stance, especially with this coming shortly after “We will adopt your baby” meme went viral (based on a couple holding a sign with that message outside the Supreme Court). That aforelinked NBC News piece notes that “The implication that adoption is an alternative to abortion has long been a message of the anti-abortion movement,” and points out that the Children’s Bureau at the U.S. Department of Health and Human Services’ Administration for Children and Families said in a November 2021 release that there were more than 407,000 children in foster care (and more than 117,000 specifically waiting to be adopted)  in the U.S. at the end of fiscal 2020.

There are also significant health risks involved with both pregnancy and childbirth, so “go through with it” is not easy advice for everyone to take around an unplanned pregnancy. And it’s interesting that, as that ESPN piece notes, Harbaugh’s comments here are very different than those previously made by his boss, Michigan president Mary Sue Coleman:

The Supreme Court overturned Roe v. Wade, the landmark 1973 ruling that established the constitutional right to abortion, on June 24. At the time, Harbaugh’s boss, University of Michigan president Mary Sue Coleman, said: “I strongly support access to abortion services, and I will do everything in my power as president to ensure we continue to provide this critically important care.”

At any rate, this fits in with Harbaugh’s past comments against abortion, which include calling it “horrendous” in a podcast appearance in 2020 and saying “the right choice is to have the courage to let the unborn be born” in his aforementioned fundraising dinner remarks last week. And it is interesting that he’s not only continuing this discussion, but publicly stating that he and his wife will raise Michigan program-linked babies their parents don’t feel able to raise. That’s a further step than anything he’s said to date, and it will be interesting to see if that ever happens.