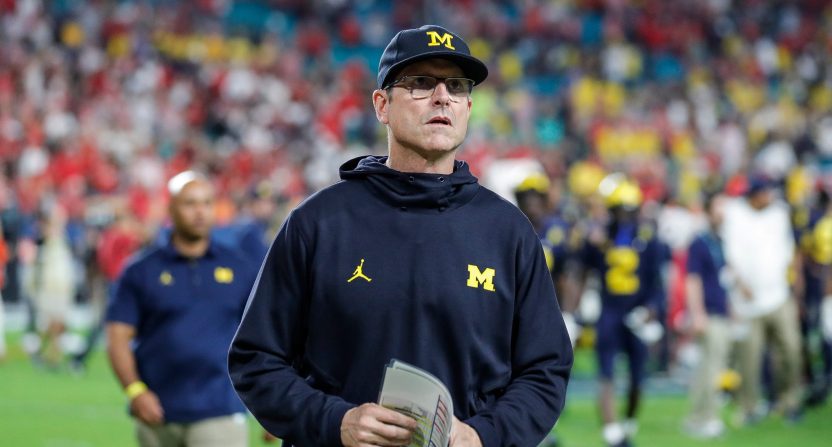 After the bizarre preseason announcement that Cade McNamara would start the season opener vs Colorado State and J.J. McCarthy would start Michigan’s second game against Hawaii (and then making the quarterback battle even more bizarre with biblical comparisons), Harbaugh told the media on Saturday night that McCarthy will be the starting quarterback going forward.

Harbaugh said that McCarthy won the job “based on merit.”

Per Jim Harbaugh, J.J. McCarthy has earned the starting job "on merit." Said he has really come on the last 2.5 weeks to raise his game. Says Cade McNamara will deal with it, has "gravel in his gut," and that "it's part of football."

Michigan won in blowout fashion in each game, taking down Colorado State 51-7 in Week 1, followed by a 56-10 win over Hawaii on Saturday night.

McNamara wasn’t asked to do much in the win over Colorado State, completing 9-of-18 passes for 136 yards (7.6 AVG) and one touchdown.

McCarthy, meanwhile, was sensational vs Hawaii, completing 11-of-12 passes for 229 yards (19.1 AVG) and three touchdowns. He got all of those numbers in the first half. McNamara also got some playing time in the blowout, going 4-of-6 for 28 yards (4.3 AVG) and an interception.

JJ McCarthy in the first half:

Even in the Colorado State game, McCarthy showed off his skills in limited playing time. He went 4-for-4 for 30 yards as a passer and had three carries for 50 yards and a touchdown.

McNamara, a senior, is in his third season as a Michigan quarterback.

But McCarthy, a sophomore, clearly gives the Wolverines a higher upside, and he’s the future at Michigan. He was a five-star recruit in the 2021 class.

Harbaugh wanted to give the veteran quarterback a chance, and you never know how young players are going to perform until you actually see it in game action. The Wolverines saw what they hoped to see from McCarthy, and then it became a pretty easy choice.

Michigan — ranked No. 4 in the AP Poll — has national title hopes, and McCarthy’s ability gives them a better chance to make a College Football Playoff run. Additionally, this will all accelerate his development for future seasons.