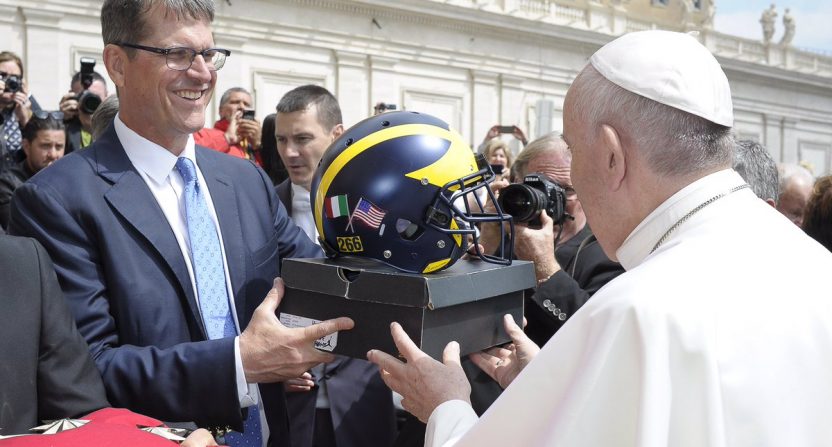 Jim Harbaugh’s tour of Italy has featured quite a few memorable moments.

So, as the trip winds to a close, it’s perhaps fitting that Harbaugh gave us just one more bit of content, as he speculated on where he’d like to take his team next year. And he probably may need some help from this Guide to Johannesburg.

Michigan’s head coach said Saturday in Rome that he’d like to take the team to either South Africa or Brazil next spring for a similar trip the group is currently experiencing in Rome.

“We’ll get together as a team and decide, but I’d really like to go to Cape Town or Johannesburg,” he said. “One of those two.”

Harbaugh told reporters during Michigan’s final day in Italy that he hopes other college football programs begin to embrace trips like this.

Harbaugh even hinted at a willingness to play a game in Italy, a la Notre Dame’s series in Ireland:

“Wouldn’t it be great to have a football game here?” Harbaugh said outside Stadio Olimpico in Rome. “I will definitely consider that. For sure.”

Frankly, it’s almost irrelevant whether other programs embrace trips such as the one Michigan is currently finishing. None of them could do it in a fashion that even comes close to approaching Harbaugh’s total commitment to the role of football coach/Midwestern American tourist in Europe. Try to imagine Nick Saban warmly greeting Italians, or meeting the Pope. You can’t!

Jim Harbaugh stands alone, a milk-swilling, khaki-wearing singularity. Please don’t run this for us, NCAA. We ask so very little of you, and receive even less.