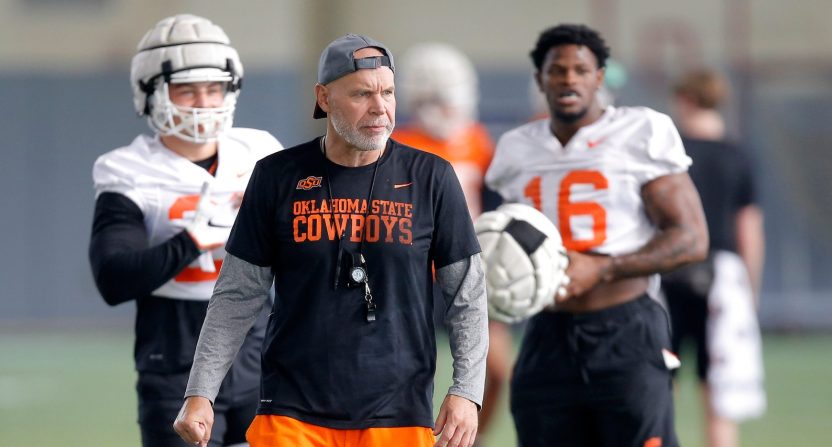 It’s a rare season when the Ohio State Buckeyes are not amongst the four schools playing in the College Football Playoff and head coach Ryan Day is making moves to try to make sure that doesn’t happen again.

Per The Athletic’s Bill Landis, Ohio State had hired away Oklahoma State defensive coordinator Jim Knowles to lead their defense next season.

Ohio State has officially announced the hiring of Oklahoma State's Jim Knowles as defensive coordinator. Buckeyes will continue preparing for the Rose Bowl with their current 10-man staff. Knowles starts on Jan. 2.

Knowles spent four seasons as the DC for Mike Gundy in Stillwater and was a finalist for the Broyles Award, which is given to the top assistant coach in college football. Many assumed that he would win it after leading the Cowboys’ defense that ranked seventh in scoring defense, third in total defense, second in third-down conversion defense, and first in tackles for loss and sacks.

Knowles was previous a defensive coach for Duke and was the head coach at Cornell for six seasons.

Gundy had spoken earlier in the week about trying to keep Knowles at Oklahoma State.

“I can tell you that our president and athletic director would love to keep Coach [Jim] Knowles in Stillwater. And he and I developed a great working relationship. I think he’s a very smart football coach, and I really think he likes Stillwater. So we’re in the process today and, really, some over the last couple weeks of trying to work out a deal to keep him here. I think it’s best for Oklahoma State football, and I think Coach Knowles wants to be here. It’s not quite as easy as just giving somebody a blank check. There’s a lot of details involved in that, but we’re working hard to keep him in place.”

Alas, it looks like the chance to lead the Buckeyes defense was simply too much to pass up. And the reaction around college football was one of excitement for Knowles and recognition that OSU just got better.

Knowles is the main reason why OK ST came within inches of the Big 12 title and the playoff.

Should have won the Broyles. https://t.co/2OtntjAz8c

Massive hire. Also I would imagine this contract is delightful. https://t.co/WGkixUVqJt

Huge Big 12 news here, with Oklahoma State set to lose one of the top defensive coordinators in the country. https://t.co/CCRH7wEoyh

If Ohio State ends up getting back into the CFP picture next season, they might have Knowles and his defense to thank for it. In the meantime, Oklahoma State has a big hole to fill now.