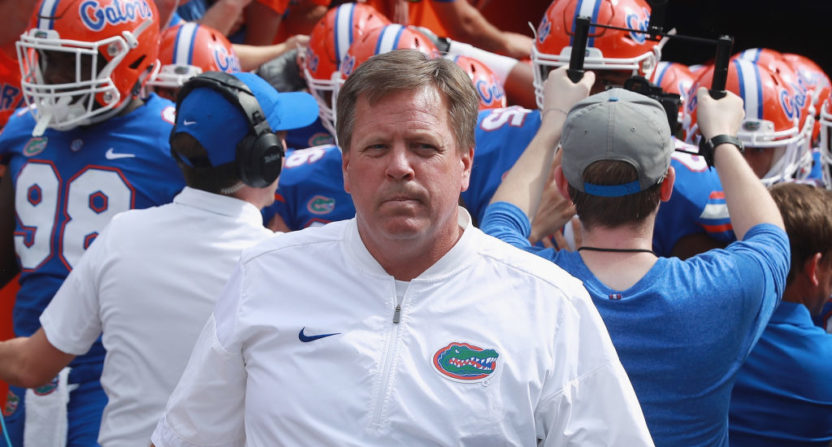 [UPDATE: Football Scoop is reporting that Florida has indeed fired McElwain. According to the Gainesville Sun‘s Robbie Andreu, the players have been informed of McElwain’s dismissal.]

Even before Florida took the field against Georgia on Saturday in Jacksonville, the angst surrounding the Gators football program was picking up. First, reports began to surface that McElwain’s representatives and Florida were beginning the process of negotiating a buyout.

Source: Agent Jimmy Sexton & UF have been trying to work out Coach Mac buyout, but are “miles apart.” Still working hard on it.

Source: Boosters have been called to pool $ in anticipation that Gators will soon be hiring new head football coach

And it didn’t take long for Florida AD Scott Stricklin to issue a statement in response as he tried to pour cold water on the rumors.

Yahoo Sports’ Pat Forde also poured cold water on the reports after they began to emerge.

Y source familiar with the situation says there have been no conversations between UF and Sexton regarding McElwain's future at school. https://t.co/PUTDoNn8BF

But the heat flared up from another direction later, with ESPN’s Edward Aschoff and Mark Schlabach reporting that the Florida athletic department is having internal discussions about trying to fire McElwain for cause following his claims of death threats and the school’s unusual statement that he didn’t provide any further information when they tried to investigate the threats. Here’s more from the ESPN piece:

University of the Florida administrators are discussing whether they can fire coach Jim McElwain with cause, multiple sources told ESPN.

After failing to find any evidence to substantiate claims made by McElwain this week that family and players received death threats, Florida administrators have worked to see if McElwain’s allegations were enough to relieve the university from paying McElwain’s full buyout of $12.9 million if he were to be fired.

Sources told ESPN that they believe the university has enough cause to fire McElwain without having to pay his buyout. Sources also said that if McElwain were to be relieved of his duties, defensive coordinator Randy Shannon would be asked to be the team’s interim coach.

The remarkable thing is that this ESPN story and Stricklin’s statement could both be completely true. Stricklin only claimed that no one from the university has had conversations with McElwain or his representatives about a buyout, and if they’re instead trying to fire him for cause, that makes sense. It’s also notable how Stricklin’s statement included no public support for McElwain.

In any case, McElwain’s seat has certainly gotten even hotter after his Gators laid a massive egg in Jacksonville against Georgia Saturday. They were down 21-0 at the end of the first quarter, and eventually fell 42-7 (with their only touchdown coming in garbage time in the final minutes). The game was never even in doubt, and Georgia freshman quarterback Jake Fromm, who was the target of some trash talk from Gators players earlier in the week, only had to throw seven passes in the victory.

That sums it up pic.twitter.com/GhBvAX1g4F

Former Gators and fans alike were certainly displeased with the performance.

Not only embarrassing the fan base now, but every Gator that wore a football uniform before this.

No matter how hard Stricklin and Florida want to put these rumors to rest, this result will put McElwain’s job security under more threat. With the Gators now 3-4 with only four games left in the season, a bowl game bid seems unlikely. McElwain’s tenure with Florida started out with plenty of promise, but after everything that went down Saturday, it looks far closer to its end than its beginning. As for McElwain himself, he said after the game he hasn’t had any conversations with Stricklin about his status, but “nothing would surprise me”:

McElwain said there have been no conversations with Scott Stricklin about his job status.

McElwain asked if he’d be surprised if he’s not Florida’s coach tomorrow: “Nothing surprises me.”