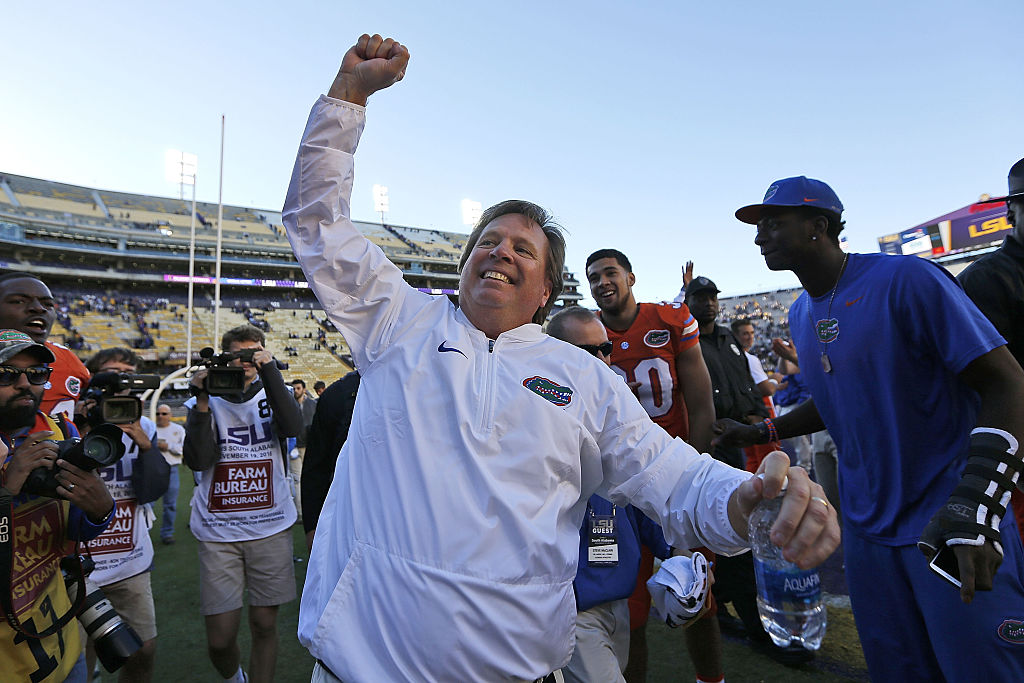 During his first year as the head coach at the University of Florida, Jim McElwain won the SEC Coach of the Year and took the Gators to the SEC Title Game. A year later, McElwain is taking Florida back to the SEC title game after going 8-3 during the regular season.

While McElwain has enjoyed his first two years in Gainesville, they could be his only two at Florida.

Why is that? Well, a rumor is circulating hat McElwain could leave the Gators of Florida for the Ducks of Oregon.

Now, the University of Oregon hasn’t fired Mark Helfrich just quite yet. Oregon went 4-8 this year, its first losing season since going 5-6 in 2004. This was also the Ducks’ first eight loss season since going 3-8 way back in 1991.

The Ducks haven’t made a decision on Helfrich yet, but are expected to make one soon. If Oregon parts ways with Helfrich, USA Today reported Western Michigan’s P.J. Fleck and Boise State’s Bryan Harsin would likely be at the top of the Ducks’ list.

However, USA Today later went on to say Oregon could aim for a bigger name like James Franklin at Penn State or Larry Fedora at North Carolina. This is where Jim McElwain appears.

“There also are whispers that Florida’s Jim McElwain could be intrigued by the opportunity to return to the Pacific Northwest, close to where he went to college and started his coaching career at Eastern Washington. Despite winning SEC East titles in his first two years, McElwain has been a bit under-appreciated by the Florida fan base and just got a new athletics director in Gainesville.”

It would be massive news if McElwain were to leave Florida for Oregon. However, as USA Today points out, there has been some turmoil between McElwain, the Florida Athletic Department, and Gators fans during his two years at the helm of the team.

Of course, this rumor may not matter at all if Helfrich isn’t fired. If he is and McElwain does enter the conversation, that would be very interesting. How often do you see a coach leave a marquee SEC school to make what could be considered, at best, a lateral move?