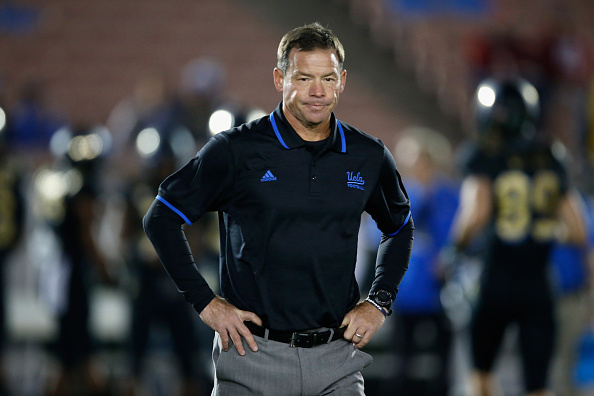 With the NFL coaching carousel getting oiled up following Black Monday, a handful of college football coaches continue to be thrown through the rumor mill as they tend to do. UCLA head coach Jim Mora, who has previous NFL coaching experience, continues to be a name worth keeping an eye on until the NFL vacancies are filled. Mora, though, says he has no interest in leaving UCLA.

The former head coach of the Atlanta Falcons and the Seattle Seahawks reestablished himself as a decent coach at UCLA by re-energizing the Bruins program, although he has failed to take UCLA to the next step that seems to have been an Olympic hurdle for the program for decades now. In big games, Mora and UCLA have fallen short far more often than not.

Despite that shortcoming, Mora has remained a coach to keep a close eye on any time NFL jobs start opening up. And this is not the first time we have broken down Mora in the NFL coaching carousel. One only has to go back to last year when it was wondered if the Alamo Bowl against Kansas State might be his final game with the Bruins. Mora has said he loves coaching the UCLA program, and in truth, he has seemed to enjoy being the head coach of the program. This news came about last year as Mora was being floated as a possible contender for jobs with the New York Jets and San Diego Chargers.

Now, here we are again. Jobs in the NFL have opened up and Mora is once again in the situation where he must publicly announce his commitment to the UCLA program, even if he does have interest in a return to the NFL. That is because UCLA is already closing in on one of the most important days of the college football offseason calendar: national signing day.

If Mora is going to stick around at UCLA, he needs to put forth a strong commitment to the Bruins so he can keep a recruiting class together with a month to go until high school players can begin sending in their letters of commitment. Recruiting is the lifeblood of any college football program, and Mora and UCLA have done well in this area the last few seasons. even if Mora does explore NFL opportunities, he needs to have a rock solid Plan B in place, because one bad recruiting class, like one bad NFL Draft, can set your program back down the road.

A couple of other things to remember here: coaches currently holding a head coaching job will never, on record, express public interest in any other job (Navy head coach Ken Niumatalolo going public with his thoughts about the recent BYU job opening went against the grain of the norm when it comes to coaching changes). With that in mind, nobody should be surprised Mora has denied any interest in leaving the UCLA job, whether he secretly does or not.

Second, coaches lie. All. The. Time. So pardon me if I don’t buy Mora at his word with 100 percent faith.