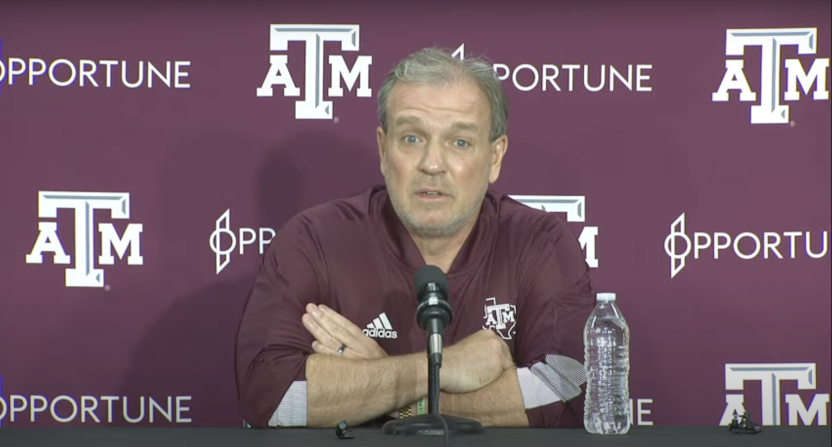 In his latest comments about NIL deals, Alabama Crimson Tide head coach Nick Saban specifically targeted Texas A&M and Jackson State, accusing the Aggies of buying every player they recruited last season and that the Tigers paid a player a million dollars to go to their school.

As expected, head coaches Jimbo Fisher and Deion Sanders weren’t about to let those comments fester in the public space. Sanders tweeted the night before that he would address the “lie” sometime Thursday but Fisher scheduled a morning press conference and he let loose on Saban.

In a pro wrestling style promo, Fisher torched Saban, calling him a “narcissist,” and challenged people to dig into Saban’s past.

“It’s a shame that we have to do this,” Fisher said. “It’s really despicable. It’s despicable that somebody can say things about somebody and more importantly 17-year-old kids. They’re taking shots at 17-year-old kids and their families. That they broke state laws. That we bought every player in this group. We never bought anybody. No rules were broken. Nothing was done wrong. The way we do things, the ethics in which we do things, and these families, it’s despicable that a reputable head coach can come out and say this. When he doesn’t get his way, or things don’t go his way, the narcissist in him doesn’t allow those things to happen and it’s ridiculous when he’s not on top.”

“And the parity in college football he’s been talking about, go talk to coaches who coached for him. You’ll find out all the parity. Go dig into wherever he’s been. You can find out anything. And it’s a shame that you gotta sit here and defend 17-year-old kids and families and Texas A&M because we do things right, we’re always going to do things right. We’re always going to be here.”

“Some people think they’re God. Go dig into how God did his deal. You may find out about a guy that, a lot of things you don’t want to know. We built him up to be the czar of football, go dig into his past. Or anybody that’s ever coached with him. You can find out anything you want to find out. What he does and how he does it. It’s despicable.”

“Its the second time we had to do this with grown men who don’t get their way and want to pout and throw a fit and act up. Just go ask all the people who worked for him, you’ll know exactly what he’s about. I always said this, my dad told me this, ‘When people show you who they are, believe them.’ He’s showing you who he is.”

When he took questions from the media, Fisher didn’t let up on Saban. He revealed that Saban called but Fisher isn’t going to take the call, saying “We’re done.” And in talking about how appoint Saban as the greatest ever, Fisher said, “When you got all the advantages, it’s easy.”

Fisher also gave his thoughts on the NIL rules acknowledging that while he wouldn’t know what rules would need to be in place, that he would like to see “unified rules across this country” and that while he’s not thrilled about the government getting involved, it might be a necessity for them to get involved.

For those asking, Texas A&M plays Alabama in Tuscaloosa October 8.