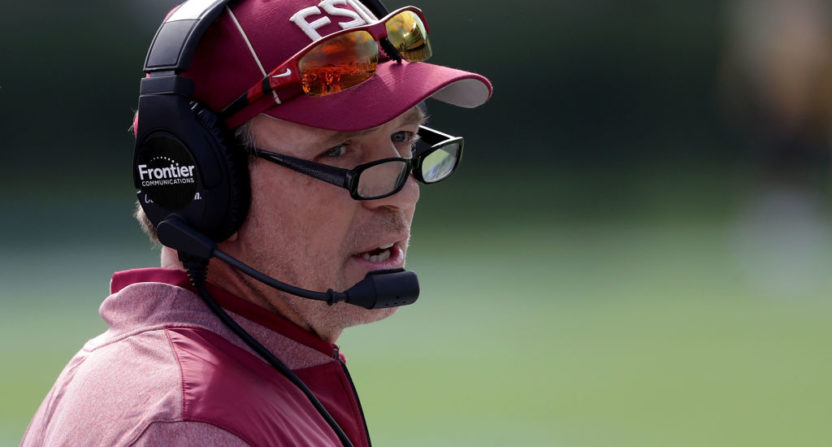 According to the Tallahassee Democrat, Jimbo Fisher is leaving Florida State to become the head coach at Texas A&M. The move had been rumored for the past couple of weeks once Kevin Sumlin’s job status in College Station was in jeopardy. As the coaching carousel continues to spin, no rumor is to be completely overlooked and dismissed. Even Arizona State going after Herm Edwards has become more reality than pure wild speculation this time of year.

Texas A&M has been no stranger to coaching rumors this season, but once the vacancy on the sideline officially opened with the removal of Sumlin, all sights were locked on Tallahassee with Fisher considered the ultimate prize.

School officials have reportedly offered Fisher an exorbitant contract, good for 10 years and $7.5 million per year. That kind of job security would be crazy stupid to pass up in this day and age.

The deal between Aggies and Jimbo Fisher has been done. Sources with knowledge of the process say 7.5 million /yr. For "Likely" 10 yrs. Negot. Began with at least 5 yrs..I am told he will arrive Sunday evening. Approval Monday followed by introduction @AggieFootball #Aggies

If Florida State didn’t have one rescheduled makeup game to play this weekend and needed one win to be come bowl-eligible, perhaps Fisher would have already taken the job last week. As it is now, he will not coach the Seminoles in their final regular-season game against Louisiana-Monroe on Saturday.

Now, this union between Texas A&M and Fisher is reportedly official. If Florida State didn’t have one rescheduled makeup game to play this weekend and needing one win to become bowl-eligible, perhaps Fisher would already be in College Station before Sunday. Defensive line coach and associate head coach Odell Haggins will replace Fisher in the interim. Florida State is reportedly targeting Oregon coach Willie Taggart and prefers a minority candidate.

Crazy job security and a loaded contract aside, the debate from outsiders about what Fisher should or should not do has boiled down to a rather common debate when discussing one power conference program attempting to lure another power conference program’s coach. It happens often enough that a move like Florida State losing a coach to Texas A&M is not exactly unprecedented, although this would truly be a unique situation.

No coach with a national championship ring has left to coach another power conference program on his own. Fisher would be the first. Steve Spurrier and Nick Saban each left for the NFL before returning to college, so they don’t count. Urban Meyer almost qualifies, but he took some time off for a year in the TV booth before switching from Florida to Ohio State, so he doesn’t qualify either.

One of the popular debates when this sort of situation pops up is over which is the better job. Your opinion on what qualifies as a better job may be clouded by your allegiance to either school in the situation, but there is only one individual who must decide what is the better job for him. Fisher’s lists of pros and cons for Florida State and Texas A&M may vary greatly from what you would compose for either school.

Removing the contract from the equation is impossible, but there are a handful of reasons why Fisher was tempted to move to Texas A&M worth considering. For starters, he’s back in the SEC (having been the offensive coordinator at LSU) and could coach Texas A&M into the post-Nick Saban era at Alabama. So if Fisher can get through how many more years Saban remains at Alabama, Fisher could potentially have the Aggies rolling at the absolute perfect time to live up to the potential that the program has been hoping to fulfill since they made their way into the SEC.

Saban has been the head coach of the Crimson Tide since 2007 and there is almost nothing left for him to prove in the game. At 66 years of age, Saban is coming down the home stretch of his coaching career. But whether that means he is in Tuscaloosa for another two or three years or another decade is anyone’s guess. So Fisher hoping to stay at Texas A&M long enough to coach in the post-Saban era is a risk.

Fisher has also been a bit agitated in Tallahassee in recent years as the pressure to win and win big has been persistent around the Florida State program. To his credit, Fisher helped set that standard after quickly turning around the program into a national title contender and winner after succeeding Bobby Bowden. But the last couple of seasons have seen Dabo Swinney and Clemson take over the ACC with back-to-back ACC titles and appearances in the national championship game, while Florida State has regressed to the point it needs a win against Louisiana-Monroe on Saturday (rescheduled after a cancellation from a hurricane earlier in the year) just to become bowl-eligible.

But I don’t look at this as Fisher ducking for cover while Dabo is king of the castle and Mark Richt potentially has Miami on the rebound. If that were the case, retreating to Texas A&M isn’t the ideal situation when you share a division with Alabama (and Auburn and LSU) or a state with the Texas Longhorns.

And what happens when Saban does retire and Alabama hires Fisher’s ACC nemesis of late, Swinney? Well, one thing is for sure. Fisher will be handsomely paid.