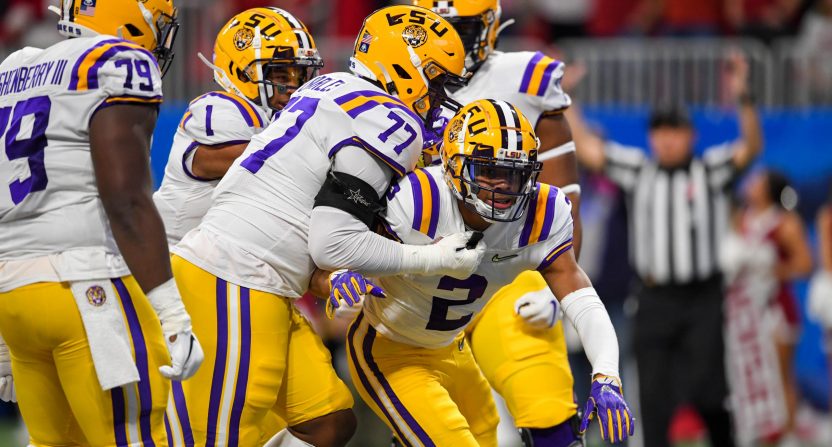 The LSU Tigers put on an offensive clinic in the first quarter of their College Football Playoff semifinal showdown against the Oklahoma Sooners. The question was whether or not the Sooners could stop the bleeding before it was too late.

It didn’t look good early in the second quarter. Oklahoma wasn’t able to get anything going on offense and punted the ball away. That’s when Heisman Trophy winner Joe Burrow picked up where he left off, scrambling for first downs. Sooners’ corner Brendan Radley-Hiles did his team no favors by targeting Clyde Edwards-Helaire with a helmet hit on a Burrow’s run, leading to his ejection from the game.

Brendan Radley-Hiles was ejected for targeting after this hit on Clyde Edwards-Helaire. #CFBPlayoff pic.twitter.com/IyfxJAr6j8

After that, it just took Burrow a few more plays to find Justin Jefferson for their third touchdown connection on the day. That made it 28-7 LSU and Burrow tied the Peach Bowl record with four touchdown passes in the game. He was also 12-for-18 passing with 208 yards as well as 24 rushing yards.

3 TD in the first half 💪 #CFBPlayoff pic.twitter.com/3kcPDUtrh4

Oklahoma responded to the back-breaking touchdown by…turning the ball over. The Sooners tried to get sneaky with a flea-flicker but Jalen Hurts was intercepted by Kary Vincent Jr, giving the ball right back to LSU. It didn’t take very long for the Tigers to make Oklahoma pay, driving down the field and quickly scoring another touchdown by, guess who…Joe Burrow to Justin Jefferson. Just like that, it was 35-7 with a little over nine minutes left in the half.

Touchdowns for Justin Jefferson in the first half 🤯 #CFBPlayoff pic.twitter.com/3hmhd2h57s

Oklahoma wasn’t ready to give just yet. The Sooners drove down the field and converted a touchdown on a Hurts two-yard run to make it 35-14.

Jalen takes it himself for 6! #CFBPlayoff pic.twitter.com/vT1Os1Quvb

However, LSU made Oklahoma pay for their insolence almost immediately. Joe Burrow found Thaddeus Moss on a busted coverage pay and Moss scampered into the endzone on a 62-yard touchdown pass. LSU was just making it look easy and silly at this point. 42-14 with a little over four minutes left in the half.

Oklahoma couldn’t answer and had to give the ball back to LSU. As had happened so many times before this one, it did not end well for the Sooners. The Tigers cruised down the field and Burrow hit Terrence Marshall for the score. Marshall’s second touchdown of the game made it 49-14 with a minute left in the first half.

Joe Burrow has thrown 7 TD passes, tied for the most ever in a bowl game. … It's halftime. #CFBPlayoff pic.twitter.com/AZcs1lbHSD

Burrow finished the first half with seven touchdowns, which blew the doors off the Peach Bowl record (four). He also threw for 403 yards in a historic performance the likes of which we have rarely seen in a college football game. In fact, seven touchdowns are the most that any player has scored in a bowl game ever. And this was just in the first half.

Barring an epic turnaround, this one already seems over and the second half will really just be about killing time before we find out who LSU will play for the national championship, the Clemson Tigers or Ohio State Buckeyes.