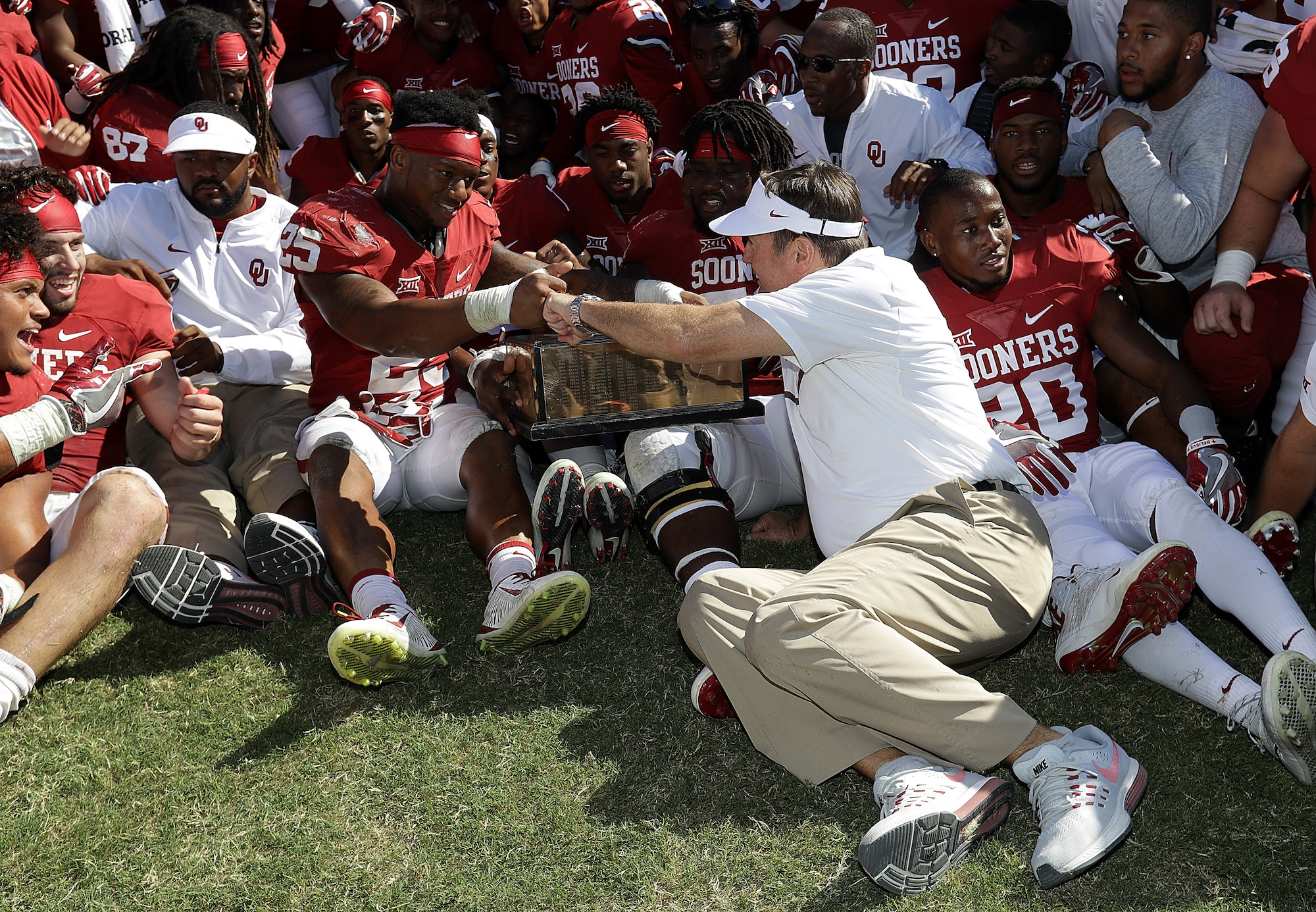 Last week, the video of Oklahoma running back Joe Mixon striking a woman in the face in 2014 was finally made public. Tuesday, a video of his interview with police three days later was released as well. Neither tells a very good story for Mixon.

Mixon was suspended from the Oklahoma Sooners football team for the 2014 season and charged with a misdemeanor. Amelia Molitor, the woman Mixon punched, suffered fractured bones in her face.

In the police interrogation video, Mixon explains why he punched Molitor, claiming that it was an instinctual reaction to getting slapped.

“The gay dude…he called me something. He was like [expletive]. So then I was like, you got me messed up. And then I called him a [expletive]. And after that, the girl, she dropped her purse, that’s when she came in my face, pushed me, and then my glasses came off, and then, like, I had, like, jumped at her, like, to watch out. And then she came in my face. I put my head down. And she swung on me.

“I pretty much had a point in the store where we got into it, and I was like, you know, she being disrespectful, I felt like I should have left it alone. But then once the dude called me the (slur), I mean, it pretty much got my, you know, thoughts off of the whole situation. That’s when it just escalated.”

Mixon took a plea deal at the time that put him on probation, required him to complete 100 hours of community service, and made him undergo cognitive behavior counseling. He has since rejoined the Sooners football team and had a breakout season on the field in 2016 with 1,183 rushing yards and 13 touchdowns as he helped Oklahoma get to the upcoming Sugar Bowl against Auburn.

The only reason the videos were released is because the Oklahoma Supreme Court ruled that the city must release the video under the Oklahoma Open Records Act.  Mixon’s attorneys chose to release the initial video of the incident before the city because they wanted to get it out there before the January 2 Sugar Bowl, where it would have been a bigger distraction.

All of which brings us to the point. Distractions. Off the field distractions. Ultimately, that’s what the University of Oklahoma and head football coach Bob Stoops deemed this incident. One of their incoming football players punches a woman in the face and walks away and the school treated it much like they would an infraction involving drugs or broken curfews.

For years, critics have questioned how Mixon could remain with the team in spite of such a shocking incident. The release of all these videos, of Mixon throwing the punch and Mixon rationalizing why he punched this “disrespectful” woman, only drives home that initial question further. ESPN’s Andrea Adelson ponders how the people in charge at OU saw these videotapes and didn’t immediately cut ties.

What has made the Mixon case so hard to believe is the way Oklahoma administrators reacted. The video release crystallizes that even more.

Stoops, Castiglione and Boren had all the facts in front of them after Mixon’s arrest. Mixon pleaded guilty to a misdemeanor charge and didn’t serve any prison time; he’s currently facing a civil suit from Molitor. That should have been enough to warrant a dismissal from the team. They’d seen the words and the video, a double whammy of evidence that they somehow stomached enough to allow Mixon to keep his place on the team.

All it seems to do is remind us that there are different rules for people in different positions. It’s one thing to keep Mixon in the school and allow him to play football for the university. It’s another thing to make him the face of your program, and that’s one step too far.

All of which points back to Bob Stoops. Few people have as much pull in the state of Oklahoma as the OU head football coach, especially when the program is doing well, which they have done under Stoops. The buck stops with him, that is, unless the buck is a five-star running back who can get you to the Sugar Bowl. David Jones at Penn Live sees the problem as something bigger than that, even. By not punishing Mixon in any real way, Stoops has helped normalize incidents such as this.

…it seems like this sort of behavior is being normalized. Maybe it’s because we’ve seen too much of it. Maybe we just want to get away from the violence so we turn our heads away and look at the games. They’re not as complicated.

I understand. I promote the games through my job. In that way, I extend the escapists’ malaise. I’m part of the problem.

But I can tell you this much: If my kid were being recruited by Bob Stoops now, I’d know exactly who he was. I’d know what Bob Stoops stands for.

And it would make a difference.

Mixon may not find many safe havens in this world like the one he’s received at OU. According to TMZ he’s already gotten the boot from apartment near campus. At least someone in Norman doesn’t want to be associated with him now.