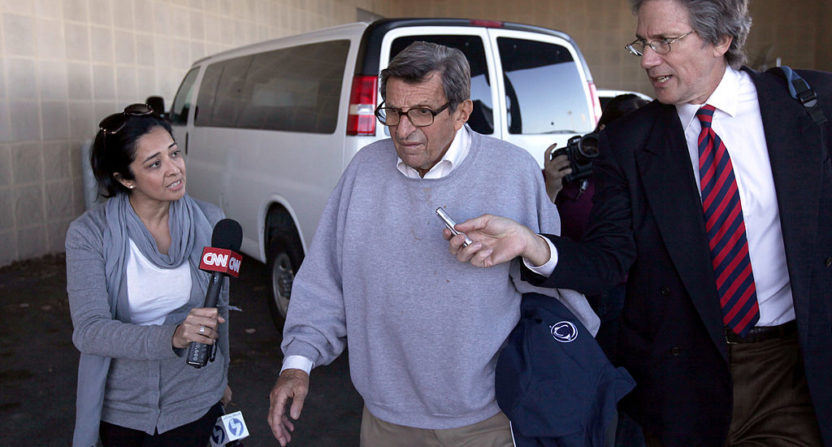 It has been five years since longtime Penn State assistant coach Jerry Sandusky was convicted for sexually abusing 10 boys in a 15-year span. While Sandusky may be in jail, the public continues to receive more and more information that tell us just how things might have been at Happy Valley.

CNN obtained a police report that claimed assistant coach Mike McQueary told police that longtime head coach Joe Paterno previously knew about Sandusky abusing boys. After witnessing Sandusky abusing a boy, McQueary went to Paterno to report what he saw. Paterno went to Penn State heads and nothing really happened for almost a decade before a Grand Jury investigation finally took place which then resulted in Sandusky being convicted.

Anyway, McQueary told police that when he told Paterno what happened, Paterno allegedly told McQueary that it “was the second complaint of this nature [Paterno] had received about Sandusky.” This contradicts Paterno’s Grand Jury testimony from 2012 where he said he wasn’t aware of Sandusky’s abuse until McQueary told him. Paterno died from lung cancer shortly after that testimony.

In addition to McQueary reporting that Paterno mentioned it not being the first time he knew about Sandusky, Paterno reportedly told McQueary that Paterno’s wife Sue was told by Sandusky’s wife Dottie that “Jerry Jerry doesn’t like girls.” While he testified under oath against Sandusky, McQueary wasn’t asked about this police report due to both the prosecution and defense figuring that talking about anything revolving around Penn State football and Joe Paterno wouldn’t help their respective cases for/against Sandusky.

Now that Sandusky is in prison and those in power at Penn State at the time are either convicted or dead, civil lawsuits seem to allege that Paterno and Penn State officials knew way earlier about Sandusky and that could be corroborated by McQueary’s statement. One suit is being brought on by two men who claimed Sandusky raped them in the 1970s when they were kids. One of them went to Paterno in 1976 which Paterno told him “I have a football season to worry about.”

In addition, emails seemed to implicate that Paterno knew about an instance in 1998 where Sandusky gave a 10-year-old boy a “naked hug in a shower” which surfaced from Penn State’s own internal investigation. In one email, athletic director at the time, Tim Curley, emailed “I have touched base with Coach.” Paterno didn’t testify on the emails because Penn State’s investigation was released after Paterno died.

Because of McQueary and Paterno legally doing the right thing and following their “chain of command” when reporting sexual abuse, new laws have been put in place where someone is required to report any sexual molestation to the police. Alert your superior as well but just doing that and assuming your superior will do the right thing will no longer protect you in a court of law. You can definitely say with Paterno and argue with McQueary that despite them legally doing the right thing, they could have done more to make sure authorities got to Jerry Sandusky before he could harm any more kids. While this won’t undo the trauma those kids who are now adults are going to feel for the rest of their lives, hopefully the changes made to the law will help save others and get people like Sandusky in jail.