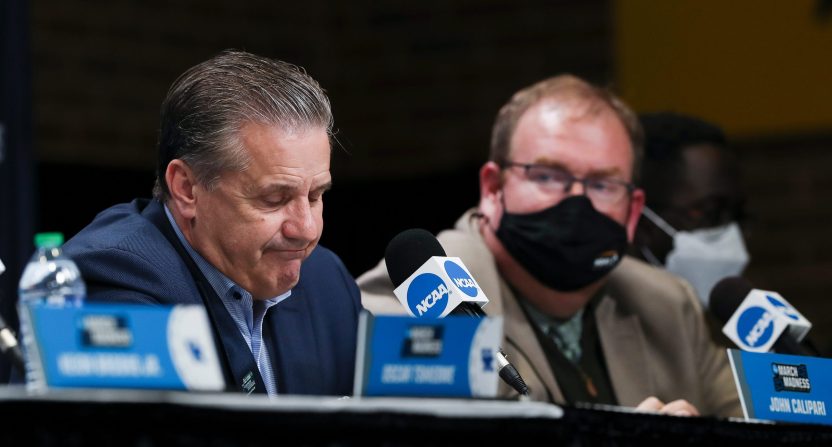 Kentucky Wildcats basketball coach John Calipari is a Hall of Famer and one of the winningest coaches in NCAA history. But following Kentucky’s stunning loss to the St. Peter’s Peacocks on Thursday, Calipari is facing a lot of criticism.

I’m not kidding you when I say Mooresville High School has a bigger gym than St. Peter’s U … and they just beat Kentucky and Coach Cal, in the NCAA tournament pic.twitter.com/tVJRUAfxGw

Calipari came under heavy fire in the immediate aftermath of the stunning upset.

That is the worst loss of Coach Cal’s career by a mile. And that’s saying something.

Coach Cal is just a PE teacher with a big budget

Coach Cal is not even the best coach in the Kentucky athletic department at this point. Mark Stoops has done more with less.

Has any coach ever done less with more than John Calipari? Greatest recruiter ever and has 1 title

I'm not a member of the "Cal can't coach" crowd, but Kentucky's gameplan has been a head-scratcher from the beginning

Will never ever understand why Coach Cal tries to milk clock when UK has no half-court offense.

Imagine if Coach Cal spent as much time coaching as he does recruiting? Might have something. Honestly not sure what he even does during games.

Coach Cal fails his players yet again in the postseason.

Calipari’s record is 763-239, or 809-239 if vacated victories are counted. Given that, as well as the number of future NBA stars that he’s coached at UMass, Memphis, and now Kentucky, it would stand to reason that he’d have multiple National Championships.

But Kentucky’s victory in 2012 remains Calipari’s only championship. That team not only had an all-time star in Anthony Davis, but Davis and Michael Kidd-Gilchrist were the first players from the same school to be taken No. 1 and No. 2 in the NBA Draft. That year’s draft featured had a total of four first-rounders and six Wildcats players drafted that year.

Coach Cal hasn't sniffed a Final Four since 2015 and has a top 5 class every season. It may be time to have a dialogue

We doubt that Calipari is on the hot seat at Kentucky. But this probably isn’t the time to ask for a raise, either.