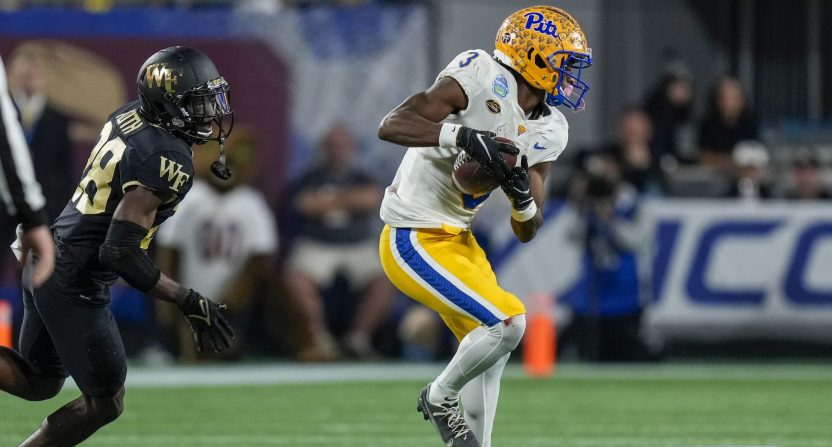 Pittsburgh wide receiver Jordan Addison was in the news last week when it was reported that the Biletnikoff Award winner was going to transfer to USC to cash in on a “massive” NIL deal.

Pitt head coach Pat Narduzzi reportedly reached out to USC coach Lincoln Riley multiple times about his suspicion of illegal discussions, per ESPN’s Pete Thamel. Since Addison was not officially in the transfer portal, no school could contact him, and doing so would be considered tampering.

“This is a really fascinating situation that’s suddenly thrust itself to the forefront of being the biggest story in all of college football,” Thamel said. “Jordan Addison won the Biletnikoff [Award] last year. He was a first-team All-American. The Pitt football staff has essentially accused USC of tampering in this situation. They feel strongly like USC is a possible destination. It’s to the point where Pitt coach Pat Narduzzi multiple times called USC coach Lincoln Riley yesterday and had some pointed conversations with him to express his displeasure.”

Now, the inevitable news has dropped and the highly touted wide receiver is officially in the portal.

Someone close to Addison, who caught 100 passes for 1,593 yards and 17 touchdown catches last season, told Thamel that he has not yet made up his mind about where to go and that “a return to Pittsburgh remains a very viable option.”

The story has become a touchstone for two of the most hotly debated topics in college sports, NIL deals and transferring. And the news that Addison was indeed putting his name in the portal in order to find a new place to play garnered a lot of reactions on Tuesday.

Let the games begin (if they haven't already). https://t.co/7MprxrZcLo

Kinda want to see Addison go to Oklahoma just to watch Pitt fans and OU fans turn on each other. https://t.co/5mQYYexKGr

This will be a fun charade full of leaked lists, narrowed lists and such to launder this for SC before he goes there. Tampering is still one of the few things that are illegal under NCAA rules https://t.co/r5d4L0Se9R

The WR market place stays wild. This is the best WR in college football. Gonna be a #NILLIONAIRE. https://t.co/yueFCrccDa

Now the big question is what will happen if Addison does indeed transfer to USC. Given what’s already out there, one wonders if an investigation will follow.