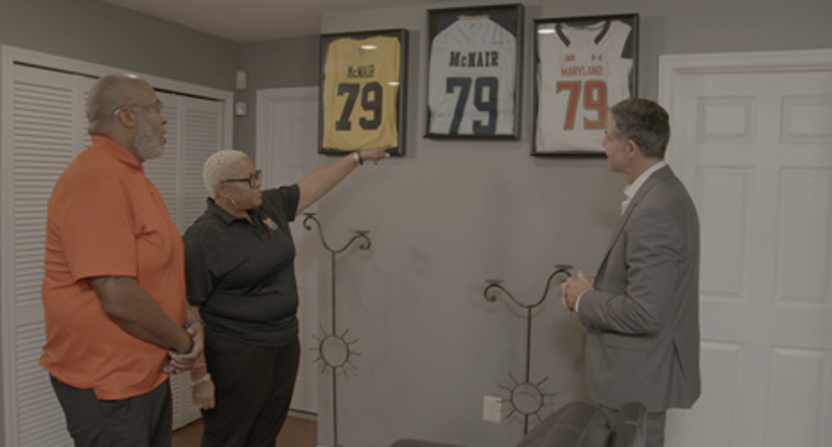 The issue of NCAA players dying after workouts has come into sharp focus with the death of 19-year-old Maryland Terrapins offensive lineman Jordan McNair earlier this year. That death led to two investigations from the university, to head coach D.J. Durkin being placed on administrative leave, and to the release of findings from the first investigation Friday. Those findings included that there was a 34-minute delay between McNair first experiencing cramps and being taken off the field, a 67-minute delay between his symptoms and the 911 call, and other questionable moves, including the decision not to put him in an ice bath. A second investigation into the football program’s culture is ongoing, and personnel decisions will be made after that.

But McNair is one of 30 of college football players to die after non-contact workouts since 2000, and that’s a story that HBO’s Real Sports With Bryant Gumbel is examining on this week’s show (Tuesday at 10 ET/PT) in a segment titled “Sudden Death.” Here’s a preview clip of that story, which has correspondent Jon Frankel speaking with McNair’s parents, Tonya Wilson and Martin McNair:

A particularly significant part in there comes at 0:38, where Wilson and McNair talk about a personal visit they got from Durkin, which convinced their son to choose Maryland. Wilson says “He promised that he would treat Jordan as if he was one of his kids and make sure that nothing happened to him and make sure that he was okay.” Yes, that’s probably something coaches say a lot on recruiting visits. But it’s a sharp contrast to the reported actions of those in the Maryland football program.

The clip is also notable for Martin McNair’s comments at 1:18 about how fast this all happened. “We went from ‘He was a healthy kid’ Tuesday morning to ‘You’re talking about a liver transplant’ Wednesday afternoon. We’re still trying to grapple with ‘Wait a minute, what happened?’ I didn’t even know what heatstroke was.”

Here’s more from a provided transcript of the show, featuring former Cal cornerback Trey Cheek talking with Frankel about how far he and his teammates were pushed in workouts:

TREY CHEEK: “We had people passing out. Our bodies sometimes just can’t take it, you know?”

JON FRANKEL: “Wasn’t this something that you were prepared for? Football players can take anything, right?”

TREY CHEEK: “We can take a lot. But we’re still human, you know?”

And Cheek later went on to share a disturbing story about a strength coach urging players to punish another player after he missed a workout:

“He told us, ‘You all gotta go and handle this. It’s you all team mate.’ And that’s when he went on telling us how they would have handled it when he was in school playing ball. ‘We’ll knock our teammates out.'”

…” One of the players was listening to coach. He walked up to Fabiano Hale, hit him right in his head. And he hit the ground. He was bleeding out of his ear.”

It will be interesting to see what else is covered in the full segment. Here’s the description of it from HBO:

*Sudden Death. While high-impact, full-speed hits appear to be the most dangerous part of football, the deadliest threat to college players is actually year-round strength and conditioning. And with the NCAA landscape more competitive and more lucrative than ever, the demands on student athletes are increasingly intense. In fact, 30 college football players have died from non-contact workouts since 2000. Amidst this spate of deaths, strength and conditioning coaches, who are tasked with taking high school boys and sculpting them into men, face limited NCAA oversight, and few repercussions when things go tragically wrong.

REAL SPORTS correspondent Jon Frankel looks at the dangers of college football workouts and the rise of the game’s newest stars, strength and conditioning coaches.

A wider look at this issue certainly seems worthwhile, and the McNair story is a strong recent hook to draw the audience in. We’ll see how this turns out.