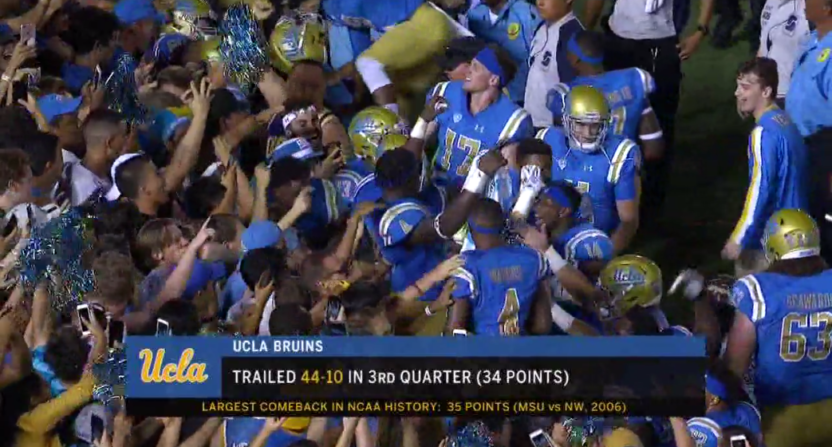 There are good sports movies, but you simply cannot script sports. Even the best screenwriters would be mocked for writing a script describing what occurred in the Rose Bowl Stadium on Sunday night.

There is a reason college football games are played within a span of 60 minutes. It is so that even when a team is running all over and through another team and building a seemingly insurmountable 44-10 lead a little more than midway through the third quarter, there is still a chance the team trailing can mount a comeback.

In a scene not seen in the Rose Bowl Stadium since, well, last January, UCLA battled back from what seemed like almost certain defeat in the fourth quarter by stringing together a 28-0 fourth quarter to complete an improbable comeback for the ages. We here at The Comeback do enjoy a good comeback story, and the Bruins certainly delivered on what is easily the biggest comeback of the very young college football season. Unsurprisingly, it was UCLA quarterback Josh Rosen who played the star role in the comeback.

Who better to handle this task, right? After a summer that saw an interview with choice quotes about time management between football and school caught fire with hot takes and criticisms hurled his way, Rosen looked like a one-man army against the Aggies for three and a half quarters. Rosen had no help around him, but finally managed to put the team on his back and lead UCLA to a furious rally against a Texas A&M team that was supposed to be solid on defense and had been wearing down the Bruins from the start with over 300 rushing yards. Helped by puzzling offensive strategy by A&M in the fourth quarter, Rosen took advantage and tossed four touchdown passes in the fourth quarter.

With each touchdown pass, the tones of FOX broadcaster Gus Johnson got a little bit more fired up as the tension in the game was coming to a boil.

The gamesmanship to realize how slowly the Texas A&M defense was getting into formation and to know he had a matchup he could take advantage of with precious seconds remaining demonstrates Rosen has the football IQ of a true winner. He had time to take the chance, saw an opportunity to go for the win, took it, and struck gold. The Aggies defense was dominant for much of the night but this was a unit that was tiring. Rosen sensed that, and pounced in a way UCLA has not done in years.

For Rosen, this was the highlight of what has been a collegiate career full of potential and promise, which has been targeted for NFL Draft hype left and right. The 2017 season was believed to be a defining one for he and his legacy as he potentially leaves for the NFL next year. There was no better way to start that season than by doing what was done Sunday night.

And if it feels as though you have seen this story before this season, that is because you probably have. 29 weeks to the day after the New England Patriots rallied to defeat the Atlanta Falcons, the Bruins began their comeback against the Aggies at the same point in the game the Patriots did.

In somewhat similar fashion, UCLA’s crosstown rivals from USC staged similar comeback in the Rose Bowl against Penn State, although with just a 17-point fourth quarter rally to escape with a three-point victory. Maybe there is something in the water for the Los Angeles-based programs. Whatever it is, Rosen has a signature moment already in the books with a 491-yard and 4-touchdown performance to show for it in a win against the SEC.

What now gets overshadowed is any criticism that could be dropped on Bruins head coach Jim Mora. Questions about not having his team ready to play at home will be tucked away for another time when needed. Instead, Mora gets to praise the quarterback he recruited. Instead, it will be Texas A&M head coach Kevin Sumlin who must answer the tough questions. For now, Mora can breathe a nice sigh of relief and let Sumlin take the heat for a complete meltdown of a game. It was a total disaster for the Aggies, but Rosen and the Bruins still had to take it from them.

Look at how "done" this game was? #UCLA did the impossible. pic.twitter.com/g3YUReQY0z

A year ago, Rosen and UCLA were in an eerily similar situation. On the road against Texas A&M in the season opener, Rosen led the Bruins on a fourth quarter of rally of 15 points to tie Texas A&M and force overtime. But a year ago UCLA could not complete the comeback and celebrate a win. Rosen went on to get banged up and miss a bulk of the 2016 season, and UCLA missed out on the postseason entirely. The 2017 season was one for redemption, and there is no better storybook way to begin that rebound than by finishing the job that was left incomplete a year ago.

Does this mean UCLA suddenly jumps into the Pac-12 championship hunt? No, but it does give UCLA a chance to hit the reset button in the middle of the season opener and see where this season unfolds. Had UCLA lost, they could easily head down a path of disappointment. Now, who knows?

You cannot script sports, and Sunday night in Pasadena continued to prove that to be the case.