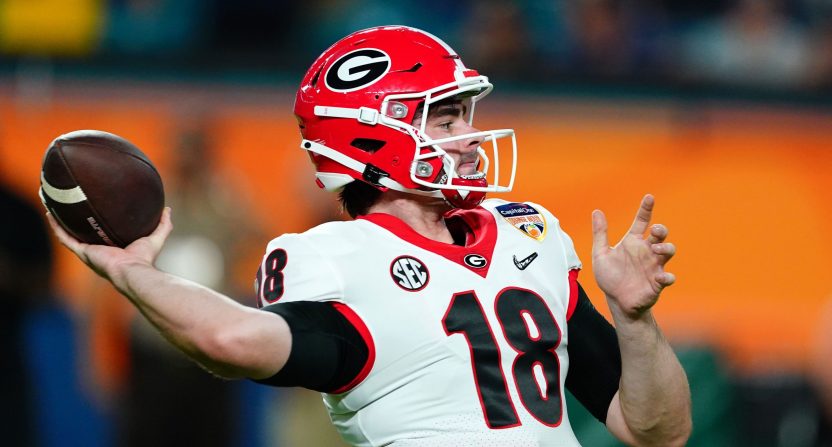 JT Daniels is in the transfer portal. Again.

The Georgia Bulldogs quarterback who lost his starting job to Stetson Bennett en route to the school’s national championship this past season is looking for a new home. The former Gatorade National Player of the Year officially entered the transfer portal on Wednesday as a graduate transfer so that he can play immediately.

After transferring from USC to Georgia two years ago, Daniels went 4-0 as Georgia’s quarterback in 2020 won all three of his starts in 2021. He came into this season as an outside candidate for the Heisman. However, multiple injuries, including an oblique and then a lat muscle, caused him to miss time, allowing Bennett the chance to shine. Even when Daniels was recovered, Kirby Smart stuck with Bennett, a decision that paid off for the program.

Daniels ended the 2021 season going 68-of-94 for 722 yards, seven touchdowns, and three interceptions.

As for why Daniels would make this move without Bennett’s plans being public, that announcement came just minutes later.

As far as where Daniels might go, the Irvine, California native might decide he wants to head back to the West Coast. However, playing time clearly appears to be top of mind for him, so looking at programs where there is an immediate need is likely to take precedent.

The news about Daniels entering the transfer portal certainly caused a sizable reaction on social media.

If he lands in the right spot, JT Daniels could feasibly end up starting three New Years Six games for three different teams in his career. That’s insane.

JT Daniels is in the portal as we reported would happen last week. Not unexpected. Feels like it was just the other day we broke the news of his transfering to UGA from USC.

Would not shock me to see Daniels wind up at Cincinnati. They need a QB and saw his skill set first hand https://t.co/4ycCGuV2NP

If you’re a borderline top 25 team today and land JT Daniels and Jermaine Burton out of the transfer portal tomorrow, you could be a top 15 team overnight.

I don't necessarily think it'll happen but JT Daniels absolutely fits the "one year stopgap for Nicco" profile that WVU should be looking for in a transfer QB.

Perhaps more surprising for Georgia is the news that Jermaine Burton, who had 26 catches for 497 yards as the team’s 2nd-leading receiver in yardage this season, also announced he’s transferring. If these two guys become a package deal of some kind, that would be a big deal for whichever school gets them.

Regardless of how it all shakes out, something tells us Georgia will be just fine.