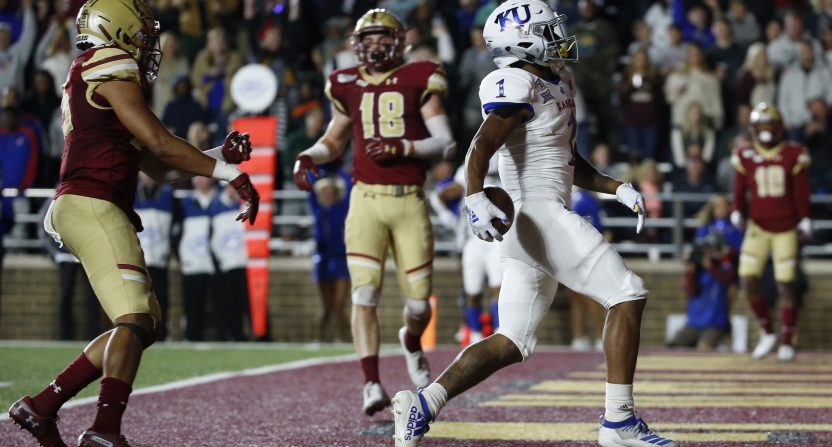 College football really does have the opportunity to tell a different story every week. A week ago, longtime Big 12 doormat Kansas dropped the second game of the Les Miles era at home against Coastal Carolina 12-7 to give the visiting Chanticleers their first win against a power conference program in the brief history of the football program. Now, less than a week later, the Jayhawks are celebrating a long-overdue road victory against a team from a Power Five conference after smacking Boston College 48-24 Friday night.

It had been a long time coming for Kansas. The last time the Jayhawks won a road game against another power conference was Oct 4, 2008 when they defeated Iowa State. To say the college football world has changed dramatically since that point in time is quite an understatement.

Here is the complete list of road wins Kansas has since 2010:

Kansas hasn’t won a single Power Five road game since the Bush administration and they’re up 48-24 on Boston College.

We just gotta set the ACC on fire.

We weren’t alive then. https://t.co/ko4ivp7jAg

Nick Saban had zero national titles at Alabama back then. https://t.co/4AVENwDett

Not only did Kansas win a road game against another Power Five conference program for the first time in over a decade, but they did so as a heavy road underdog. Boston College closed as a 20 or 21-point favorite depending on the sportsbook. It may be safe to say this is the worst loss of the Steve Addazio era in Chetsnutt Hill, Massachusetts.

Boston College was a 21-point favorite.

What does this mean for either team? Simply put, this is a devastating blow for Boston College. Just a week ago, we pondered the possibility of Boston College potentially getting into the top 25 before facing Clemson, when breaking down Clemson’s path being cleared for a spot in the College Football Playoff. In that post, it was just assumed Boston College would take care of business against Kansas (and Rutgers).

“Boston College is off to a 2-0 start and has games against Kansas and Rutgers coming up next, before games against Wake Forest, Louisville, and NC State. So, it’s feasible Boston College could be in the top 25 when they visit Death Valley in late October.”

Yeah, that’s probably not going to happen now (I didn’t even mention Wake Forest got off to a 3-0 start on Friday night with a NONCONFERENCE game against UNC, and Louisville looks to be an improved program early on this season).

But what about Kansas? Are we to believe a team that lost to Coastal Carolina a week ago has all of a sudden figured everything out and is ready to kick up some dust in the Big 12? Well, no, of course, that is not the case. However, Miles has something he can take home and use to his advantage. He has a reason to give players the confidence they can win games, on the road, against power-conference opponents.

Les Miles leads #Kansas to their first win over a Power 5 Program on the road since Oct. 4, 2008… pic.twitter.com/hOhLjJeHW2

This win could be a huge swing that — dare we say it — catapults Kansas into the bowl game conversation for the first time since 2008. Take a look at the Kansas schedule, and all of a sudden there could be some games you might start thinking about writing down in pencil as wins instead of losses. West Virginia at home? Why not? On the road against TCU? Sure.

Oklahoma at home? Well, let’s not get too carried away just yet. But for at least one night, Kansas fans have a reason to believe in their football program taking some steps forward.