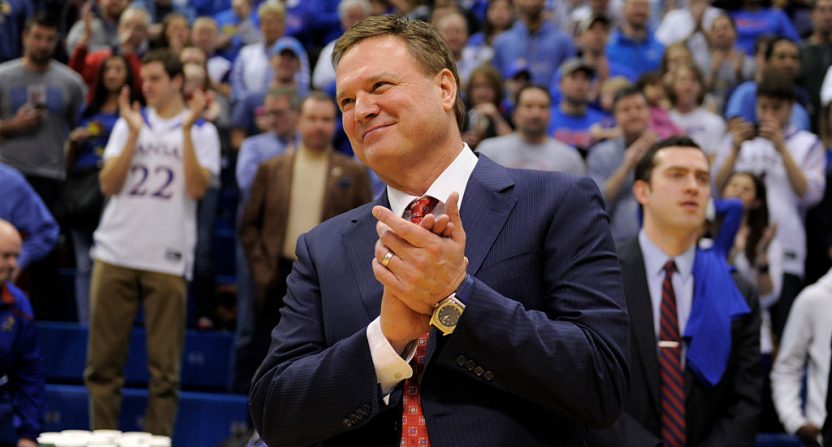 There was an update in the ongoing federal investigation into the allegedly corrupt payments between Adidas, players, and player handlers that has hung over college basketball for months now.

The Department of Justice released new charges that served to reinforce prior allegations against Louisville and Miami, while adding Kansas and North Carolina State to the list of schools who should probably be worried about potential NCAA sanctions in the near future.

Current Dallas Maverick Dennis Smith Jr. is the likely name linking N.C. State to the case, while people are still trying to figure out exactly who at Kansas is or was involved; Dan Wetzel originally reported it was Josh Jackson, but later rescinded the report.

Matching up the timeline in the indictment, it does not involve Josh Jackson. There are two other Kansas players involved.

The entire indictment is available here to browse, but if you’re not into parsing a 36-page legal filing, here are some highlights:

From the Kansas section, what appears to be a $30,000 cash drop. Right out of the movies. pic.twitter.com/uHUevu81jE

Silvio De Sousa appears to be caught in this, too.

Later, the indictment says that a college coach asked for $20,000 to pay the player to override a previous deal the player had made. pic.twitter.com/OL9VCrVfFe

Amusingly, the Miami update really serves as a nice juxtaposition to the fact the Hurricanes just extended head coach Jim Larranaga. Like, this morning.

And that was before this news even broke! College sports, everybody.

As to what all of this means, on the grander scale: who knows? This entire investigation has such an unpredictably wide array of possible outcomes. Could the NCAA just do nothing, or at least what amounts to nothing, slapping anyone involved with minor penalties while promising to do better going forward? Sure!

On the other end, could it lead to what amounts to a sea change in the landscape of the sport, with multiple schools slammed with penalties and big brand-name coaches facing show-cause penalties? (The “Bill Self coaches the Denver Nuggets” timeline.)

Maybe! Probably not, but maybe! That we’re even considering that as a possibility is astounding, all things considered. The only real thing we know for sure: everyone in college sports is going to be investing in a burner phone or two. Though that’s a lesson they should have learned a long time ago.