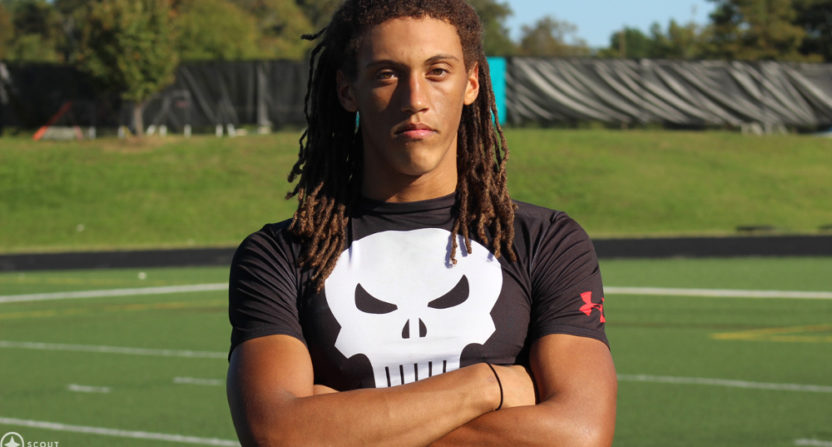 College football transfer rules are extremely tricky and complicated. On top of that, they seem to place a bigger emphasis on the playing career and timeline of the student’s athletic career than on the student’s academic career.

Kansas State has been in the middle of a perfect example of this dynamic for around a month. Corey Sutton is a 6′ 2″ wide receiver who just finished his sophomore and no longer wants to play at Kansas State, which he announced last month when he said he would like to transfer.

The wideout took that to the extreme by bringing his school a list of 35 schools he could potentially transfer to if he’s given approval in early May, according to The Wichita Eagle.

A week later, the Wildcats didn’t just say no to one or two schools on the list, but all 35. Sutton told The Wichita Eagle that no other Big 12 schools were on the list as well as no programs that Kansas State plays in the near future. On top of that, a handful of schools on the list were FCS and Division II programs.

But none of that mattered to K-State. To them, it seems like Sutton should stay in Manhattan, Kansas or pay his way through school elsewhere. That’s something very important to note. The list included DII schools and DII programs can’t give athletic scholarships. Sutton can still transfer to one of those DII schools or an FCS or FBS school on the list, but he would have to do so without financial aid.

“I don’t have enough money for that,” Sutton said. “(Snyder) is trying to treat me like I am his kid. Why is he treating a 19-year old like that and trying to change his life like that? I have never heard of anything like this before.”

Due to the unfairness of the situation, Sutton appealed the program’s decision. Unfortunately for the wide receiver, the school upheld the decision Wednesday.

“When I originally told Coach Snyder I was going to transfer he said, ‘Well, Corey, I feel bad that you want to leave, but I can’t make you stay,’ ” Sutton said. “I dropped all my classes, moved out of Kansas and started looking at my options, then I find out they are denying me my release.

“Coach Snyder told me (Wednesday) that when I signed my letter of intent that was my commitment to him, that I was going to be there for four years. I heard that and told him, ‘Coaches can leave. So why can’t a player leave? You made a commitment to me that you were going to treat me the right way and that’s not what you’re doing.’ ”

This whole debacle that has played out in public, most likely to the chagrin of Bill Snyder and all of K-State, the Head Coach talked about the situation at a Catbackers event Thursday.

“I’ve been around there for 28 years, the young man was in our program for less than two years,” Snyder said. “I think our fans know what I’m about. They know what our program is about. I think they trust that.

“The feeling all along if you’re a No. 2 you probably want to be a No. 1. If you have the option to leave and you have 22 No. 2s on your team leaving you don’t have much of a team left. It doesn’t make sense to not try to prevent that from happening.”

When The Wichita Eagle reached out for comment from the school’s Athletic Director Gene Taylor, they didn’t immediately receive a call back. Snyder delivered his own response Thursday, though:

Bill Snyder goes on a dissertation about the decision to deny Corey Sutton the opportunity to transfer. @KCTV5 #KState #KstateFB pic.twitter.com/qTUkfnb7bO

It seems rather silly for Kansas State and Snyder to both be so critical of Sutton and so intent on retaining him at all costs. The whole situation has justifiably frustrated Sutton who took to Twitter to express his feelings on Wednesday. The wide receiver later took the tweets down, but The Wichita Eagle managed to write them down before they were deleted.

“Can you stop being a slave master and give me my release?”

“I worked way, way, way too hard for this to let a man stop me.”

Sutton played in 11 games this past season and caught a total of four passes for 54 yards with no touchdowns.

[The Wichita Eagle; photo via Scout]