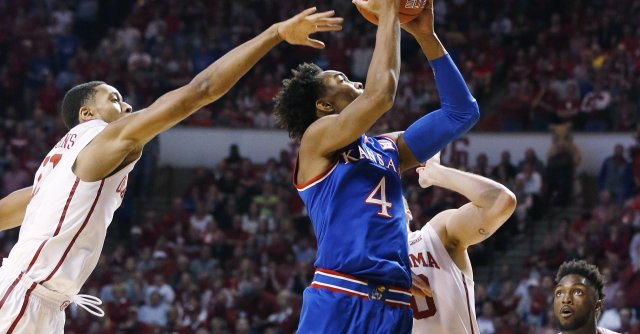 It is always one of the most remarkable aspects of college sports.

The years — decades — slip by. Players come and go, the best of them after just one or two seasons. Rules change. Styles of play change. Yet, certain outcomes remain the same, as though specific programs are human individuals — they retain their personality each and every year, for better or worse.

The Kansas Jayhawks fit this discussion in football, relentlessly bolted to the bottom of the Big 12. They just as surely fit the description of an unchanging constant in college basketball, but for all the right reasons.

The Jayhawks have won at least a share of each of the last 11 Big 12 regular season championships. Bill Self has coached every one of those teams. Saturday afternoon in the Lloyd Noble Center, Self ran into one of the most significant challenges to his amazing streak.

Thanks to a brilliant performance from Devonte Graham, the Self-made Jayhawks are still in the Big 12 driver’s seat.

Kansas rode Graham’s 27 points — and his terrific defensive effort against Player of the Year frontrunner Buddy Hield — to a 76-72 win. Oklahoma, not KU, suffered a devastating blow in the Big 12 chase.

The Jayhawks aren’t home free — West Virginia will have a lot to say about the end result of this conference race — but Kansas now stands much closer to a 12-year championship streak in its conference.

Bill Self punched Devonte Graham in his chest before postgame interview then said "I thought you was somebody else" pic.twitter.com/NNfT7XViPs

Oklahoma and Kansas previously played on January 4. That epic game was staged on a Monday night in Phog Allen Fieldhouse, with OU facing a short turnaround after a Saturday afternoon game.

This time around, the schedule was much more favorable to the Sooners, whose most recent game was on Monday night, leaving their legs fresh for the second half of the home-and-home conference series. Oklahoma beat Kansas at home last season, but only after Kansas had clinched the top seed in the Big 12 Tournament. This year marked an opportunity for OU to gain that spot and potentially leave the Jayhawks without a piece of the conference crown for the first time since 2004.

Buddy Hield, the foremost college basketball player in the United States, gave Oklahoma a great chance. However, Graham — his counterpart — took the game away from him and the Sooners.

It’s not as though Hield didn’t have his moments on Saturday. This three was absolutely ridiculous, and it helped OU briefly gain an advantage in the second half:

Yet, that bucket was one of only five makes from the field for Hield. He finished 5-of-15 from the floor, getting nine points at the foul line. (He attempted 10 free throws, and his one miss came in the final half-minute, with OU trailing by one.)

Who hounded Hield on defense, as well as anyone has played the OU star this season? Devonte Graham.

Naturally, when a player manages to reel in such a luminously talented shotmaker, it’s reasonable to think the outpouring of defensive energy will limit (at best) or hijack (at worst) one’s offensive output.

Graham off a second-chance scramble for Kansas.

Kansas never trailed again after that last triple from Graham.

The only detail worth adding to the above video is that KU forward Perry Ellis corralled the loose ball from a previous miss to give Graham another look at the rock. Ellis was all over the floor in the final three minutes, hustling to track down offensive rebounds. OU actually outworked Kansas for most of the afternoon on the offensive glass (15-10), but in the final minutes, Ellis did enough work to put Graham in position to deliver his thunderbolts.

The day started with Buddy Hield being the center of the conversation. However, for all of Oklahoma’s deficiencies — particularly the continued cold shooting hand of Jordan Woodard (3-12 overall, 1-6 from three-point range) — this was a game which was taken away from Hield by Graham and KU.

Oklahoma didn’t lose so much as Kansas won with a steely performance away from The Phog. It’s precisely the kind of poised display which had not been a constant feature of the Jayhawks’ season to date.

Surprised? You shouldn’t be.

If the last 11 college basketball seasons have taught us anything, it’s that Kansas always answers the bell in the Big 12 when it is severely tested. The Jayhawks reminded us of this central reality on Saturday. Devonte Graham delivered a very effective and eloquent two-hour presentation.

Rock. Chalk. Closing in on a dozen straight conference championships.