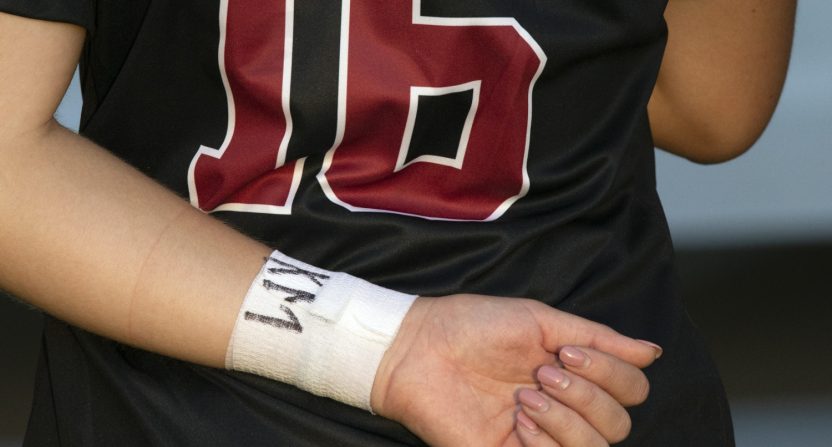 Content warning: this article contains reference to suicide. If you or someone you know are in need of help, you can call the 988 Suicide And Crisis Prevention Lifeline.

In February, star Stanford Cardinal soccer goalie Katie Meyer died by suicide at 21. Her death has now led to her parents filing a wrongful death lawsuit against the university. That lawsuit cites an after-hours disciplinary notice they sent to her on the night of her death. Here’s more on that from ESPN:

At the time of her death Meyer, 21, was facing disciplinary action for allegedly spilling coffee on a Stanford football player who was accused of sexually assaulting a female soccer player. Meyer’s father said his daughter was defending that teammate, who was a minor at the time.

The lawsuit states that on the night of her death, Stanford “negligently and recklessly” sent her the formal disciplinary notice that “contained threatening language regarding sanctions and potential ‘removal from the university.'”

The piece goes on to say that on the night of Feb. 28, Meyer FaceTimed her parents and two sisters from her dorm room to coordinate plans for spring break and was in “a good mood.” But later that night, she received a six-page email from Stanford informing her of a disciplinary hearing. She was found dead the next morning, with an autopsy ruling she died by suicide. The lawsuit claims there’s a causal link there:

“Stanford’s after-hours disciplinary charge, and the reckless nature and manner of submission to Katie, caused Katie to suffer an acute stress reaction that impulsively led to her suicide,” the lawsuit states. “Katie’s suicide was completed without planning and solely in response to the shocking and deeply distressing information she received from Stanford while alone in her room without any support or resources.”

Stanford spokesperson Dee Mostofi disputed some of the “false and misleading” allegations in the lawsuit in a response sent to several media outlets, including ESPN:

“The Stanford community continues to grieve Katie’s tragic death and we sympathize with her family for the unimaginable pain that Katie’s passing has caused them,” Mostofi wrote.

“However, we strongly disagree with any assertion that the university is responsible for her death. While we have not yet seen the formal complaint brought by the Meyer family, we are aware of some of the allegations made in the filing, which are false and misleading,” Mostofi added.

This lawsuit is at a very early stage, and it’s quite possible it could be dropped or settled before it gets too far in court. But the filing of this is certainly notable, especially around the discussion of Stanford’s disciplinary proceedings against Meyer for what her family said were actions taken in defense of a teammate after sexual assault accusations against a football player.

The nature of those disciplinary proceedings here is new, but their existence is not. Shortly after Meyer’s death, her parents revealed on NBC’s Today that she had been facing disciplinary proceedings,  and that those were for defending a teammate. At the end of May, her parents said they “continue to have many unanswered questions that remain of concern.” That came around their efforts to launch a “Katie’s Save” approach that would let students opt in to designated adult advocates being notified if students hit severe challenges. And in August, a group of prominent Stanford alumni called for the university to revamp its disciplinary process, citing Meyer’s case, releasing documents, and saying the school had “consistently failed to protect students” in disciplinary proceedings.

And there is wider context here to consider. Many colleges and universities have had to grapple with suicide, but suicide deaths and mental health issues have been under particular discussion at Stanford. After Meyer’s death, and three other Stanford students who died by suicide in a period of just over a year preceding that, students rallied to put pressure on the school to offer more mental health support. The administration pledged to provide more mental health resources to students, but six months later, they had not yet hired any more counselors (despite receiving funding to hire four more), and were still under fire from students for perceived systematic problems with their approach to mental health support.

The discussions around Meyer and Stanford are going to continue for a while. There are still impacts there for those who knew her well, including members of the current team. (Defender Sarah Paulson is shown at top wearing Meyer’s initials on her wrist ahead of an Oct. 14 game honoring Meyer.) There’s also the wider issue of the school’s approach to students’ mental health, and if and how they’re going to implement their promises to improve. And this lawsuit will be worth keeping an eye on, both for the specific claims about the school’s disciplinary approach here and for what, if anything, Stanford eventually offers to support their spokesperson’s charge that these allegations are “false and misleading.”

If you or someone you know is in need of help, call the 988 Suicide & Crisis Lifeline, or use their web or text chat.