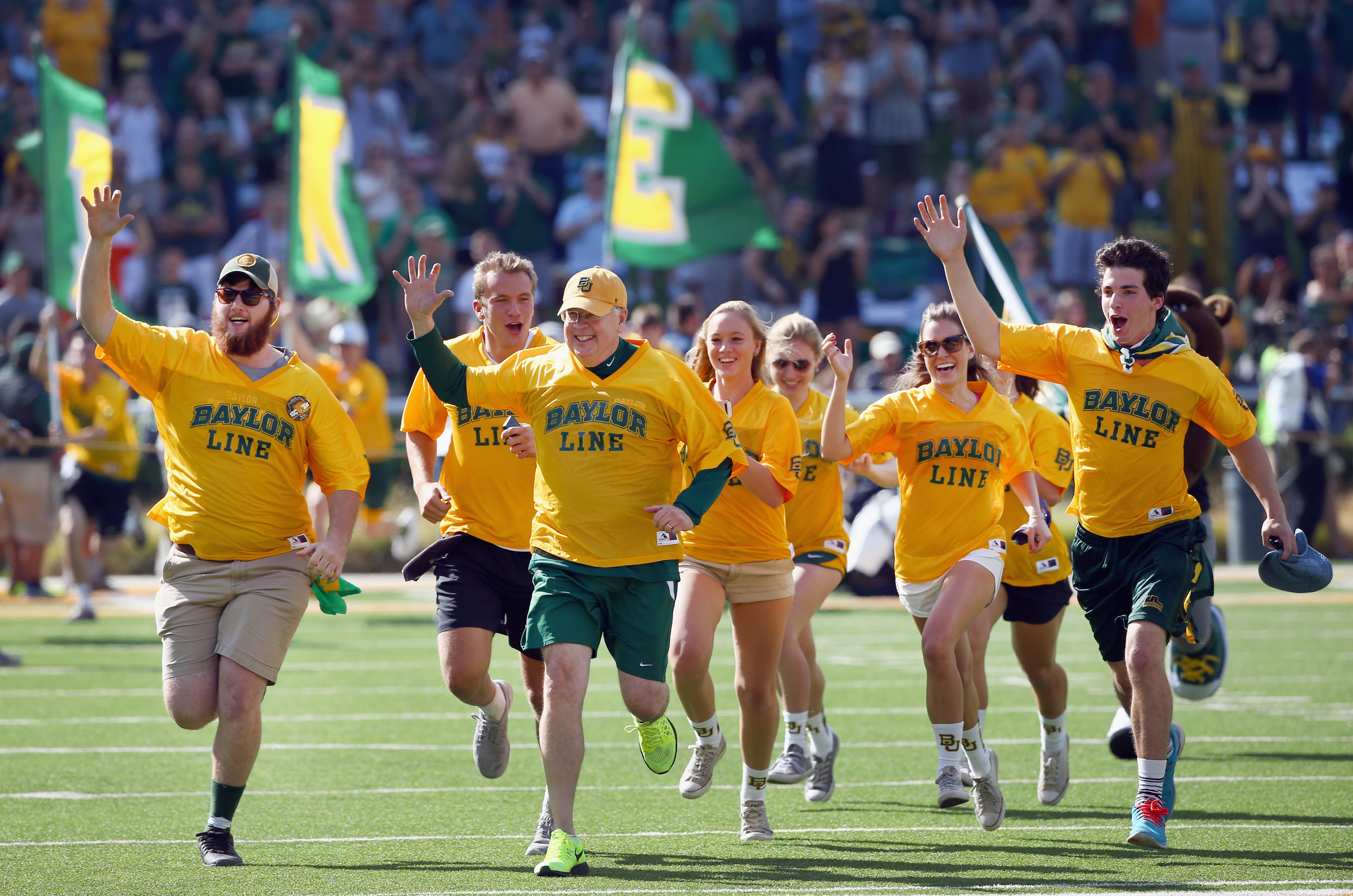 When faced with the kind of scandal that Baylor University is grappling with right now, there are basically three responses you can have.

First, you can own up, come clean, ask for forgiveness and begin the healing process. It’s the hardest of the three to come to terms with, but it’s also the best-case scenario. When a situation like this escalates to such disturbing heights, we want an adult to step forward, explain how it happened and what’s being done about it. It’s the response we most want but, sadly, it’s the response we very rarely get.

Second, you can dig in your heels, grit your teeth, and demand that everyone recognize that they are wrong and you are correct. When the world backs you into a corner and everyone is against you, it’s actually somewhat easy to fight back even if the facts don’t do you any favors. Ask Penn State, they’ve been doing it for years. Of course, this response hinges on the hope that evidence and proof don’t eventually emerge to prove you wrong, which invariably always happens, which then makes your response even worse than the initial crime.

Third, you can plead ignorance. Who, me? Surely you jest. How could little old me have been responsible for these heinous crimes that happened on my watch? I’m just a simple person who was too trusting of those around me. I’m sorry bad things happen, but I want to make it clear that I couldn’t have had anything to do with it because I had no idea. It’s the weakest response any person in a position of power can give and, sadly, it’s the response we usually get.

Outgoing Baylor president and chancellor Ken Starr took a back seat last week as the Baylor Board of Regents stepped in and started cleaning house on their athletic department and school leadership. They did so following the release of the Pepper Hamilton report outlining allegations of rape and sexual assault perpetuated by the school’s football team and the coaching staff’s deliberate attempts to silence victims.

This week, Starr decided to have a sit-down interview with ESPN’s Joe Schad in what may go down as one of the most damning and incriminating interviews anyone in his position has ever given. Each new quote is more shocking and tone-deaf than the one before it.

Ken Starr: “I’m behind a veil of ignorance.”

If you’ve ever been horrified about just how long or just how high up an abuse scandal went, it’s always because of someone who thinks and acts like Ken Starr. Someone in a position of power who claims no responsibility over anything.

Perhaps that’s Starr’s gift to us, if we’re willing to recognize it. In one interview, he’s provided for us all of the signs we need to know someone is incapable of our faith or trust.

1. They refuse to take any responsibility whatsoever.

Even as he resigns, Starr tells Schad that “I didn’t know what was happening, but I have to and I am willing to accept responsibility.” It’s like a non-apology apology. Being president or chancellor or whatever Starr was at Baylor, I’m willing to bet he took credit for any of the accolades his school received under his watch. But you don’t get to do that, then relieve yourself of blame when bad things happen. The sign of a good leader is someone who steps up, owns the problem, and shows us a way out of it. Starr is basically admitting that he’s incompetent, which might give him an excuse, but actually makes it worse in a way.

2. They refuse to talk about the real victims.

Nowhere in his interview does Starr mention the alleged rape and sexual assault victims, let alone call attention to the pain and horrors they’ve gone through.

3. And then they indirectly blame the victims.

One of the most jarring moments of the interview was Starr’s comments about where the alleged assaults took place.

It’s bad enough that Starr was factually incorrect (10 sexual assaults have been reported in Baylor dorms since 2010), but let’s dig into what he’s saying about off-campus parties and alcohol.

First of all, Starr is trying to make us believe that no one on Baylor’s campus drinks alcohol, which, sure thing buddy. Second, Starr is implying that the reason these sexual assaults happened is because the people involved are partying and drinking. From there, we can reasonably deduce that he’s trying to make one of two conclusions:

** The women who were sexually assaulted were drinking, so… you know….

Starr would probably be horrified if confronted with the idea that he’s putting blame on rape victims, but as a crusty old man who runs a religious university, it’s clear that he has some very strange and dangerous misconceptions about sexual assault. Perhaps it’s conscious, perhaps it’s subconscious. Either way, it doesn’t matter. Ken Starr shouldn’t be in a position of power over a ham sandwich, let alone other human beings.

4. They spend an inordinate amount of time defending those who allegedly committed the crimes.

Not only does Starr not talk about the alleged victims, he goes out of his way to humanize and defend the alleged assaulters.

Ken Starr on Oakman/Okwuwchu: “I can’t disagree with the policy judgement to give second chances to young men with a very tough past.”

Ken Starr: “Yes, in retrospect it would have been a lot safer to say to these young men, no, we’re not going to give a second chance…”

We were one more question away from Starr saying “boys will be boys.”

What Starr seems to be trying to say is that he and Baylor should be congratulated for wanting to give alleged rapists and sexual assault perpetrators second chances. For seeing the good in them that didn’t actually exist. For trying to silence those who spoke up, because had they been able to, these poor guys would have had their chance to make millions of dollars taken away from them unfairly. How cruel.

Unfortunately, Starr is spot-on with that last part. Here in America, we’ve been more than happy to give men the benefit of the doubt in these situations while pushing the concerns of the victims to the wayside.

As people like Starr are removed from positions of power around the nation, hopefully we’re changing that.

5. They go all-in to defend the people stuck in the same boat with them.

Surely if you don’t think Starr was responsible for what happened involving Baylor football, you can at least recognize that head coach Art Briles was responsible. It’s his program. His team. His players. His coaches. Everything that happens involving his program happens with his knowledge and if it doesn’t, then he’s not fit to have the job. Right?

Nope. Briles is a saint who simply loved too much (just like Starr)!

“Coach Briles – and I don’t have all the facts on it – Coach Briles was a player’s coach, but he also was a very powerful father figure,” Starr said. “He, through the assistant coaches, to the best of my knowledge, said, ‘Here are the rules.’ And they were fairly quick, they’re forgiving, I will admit it, and that’s the same way I am. But he has real gifts and he wants the best for these young men. He wants them to get an education. He’s a great encourager. That’s what that program is. But clearly there were things that were extremely disturbing and disquieting.”

6. They’re narcissists so far removed from reality that they can’t possibly comprehend the truth of the situation.

Of all the disturbing quotes Ken Starr had in his interview, none was creepier than this one.

After everything that’s happened, not just in the last week, but over the course of the last few years. With multiple rapes and sexual assaults allegedly happening since as far back as 2009 and with dozens of people losing their jobs and seeing their careers ruined, Ken Starr still can’t help but see himself as a folksy uncle always available with a hug and a smile.

If Baylor University really wants to begin the healing process for its students, community and fans, it will release the full Pepper Hamilton report and all of the information it provided to them (something Starr agrees with under the delusion that it will exonerate him). Doing so would be the closest thing they could still do to resemble that first response to a crisis I mentioned up top.

Even if they don’t, which is entirely possible, at least we’re headed in a direction where the victims can be heard and the truth can be revealed. Plus, Ken Starr and his ilk are no longer in charge of anyone’s well-being.

Thank God for that.