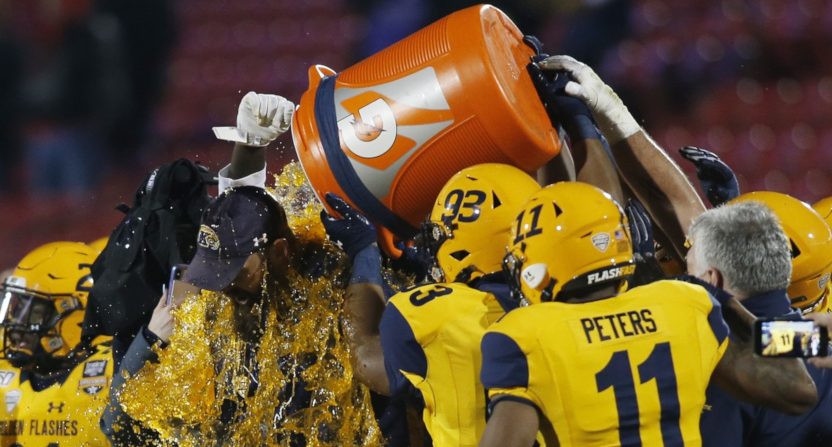 Sports cancellation or postponement moves like the Mid-American Conference cancelling fall sports (and planning to shift to the spring) certainly have some logic from a business perspective. It was always going to be tough for the MAC to make fall football work after three Power Five conferences (including the Big Ten, which alone had 10 buy games scheduled against the MAC) said they were going conference-only, and Group of Five conferences like the MAC also don’t have as many financial resources as Power Five conferences do, putting them in an even tougher place when it comes to finding funds for regular COVID-19 testing. But cancellations or postponements like that still have an impact on the players involved, and an interesting story on that front comes from the Kent State Golden Flashes, via Bruce Feldman at The Athletic:

Word came out during the downtime when they were transitioning out of the field house and into the stadium. Players got on their phones. Things got hectic. Players were crushed. [Head coach Sean] Lewis called his team together. And then something very powerful happened.

One of his team leaders, Adam Dulka, a 5-9, 218-pound senior tight end who began his college career as a walk-on at Syracuse with Lewis, spoke up.

“Coach, if you got any bad news to give us,” Dulka said, “it can wait 15 minutes because we want to do special teams.”

“I said, ‘You’ve known me long enough. If you guys want to go, let’s roll,’ ” Lewis said. “So, we did 15 more minutes of special teams, and then we talked about it. It was really, really cool.”

A lot of the focus in college football is often on the teams at the top that can contend for playoff spots, or on the top talents who might go high in the NFL draft. But the sport is a lot bigger than that, with each team and each player having their own goals, and the Golden Flashes are an example of that. Last year, under Lewis (who was then 33 and in his second year as the school’s head coach), they went 6-6 in the regular season, earned a Frisco Bowl berth, and beat Utah State there for the first bowl win in school history (Lewis is seen above getting a Gatorade shower after that victory). A lot of their players probably had high hopes to build on that this year. And while that still might be possible in a spring season (it’s far from clear how that might work right now, and how many, if any conferences might join them there), Saturday’s news was certainly a blow for them. So it’s interesting to hear about how some players wanted to postpone that news to finish their practice drills.

It’s not entirely clear what’s ahead for Kent State and other schools impacted by Saturday’s MAC cancellation. Lewis told Feldman that the plan is for his team to stay on campus right now and go forward with hybrid academic plans. There may be team activities and workouts allowed by the conference, but a lot still isn’t known yet. And it may even be that the Golden Flashes’ season winds up being not that different after all the MAC is able to make its spring plan work. But Feldman’s piece on what happened at the Golden Flashes’ practice Saturday is a good read that shows some of the current impacts on coaches and players.

None of that necessarily says the MAC was wrong to go ahead with this postponement. As mentioned above, the conference would have faced financial challenges from out-of-conference changes from other conferences. And beyond that, these Group of Five schools and their limited budgets would have had some challenges in running in-season levels of testing. It makes a fair bit of sense for them to try to move to spring, especially as there’s reportedly already ESPN interest in televising a spring MAC season. But Saturday’s postponement’s still hard for a lot of coaches and athletes, and Feldman’s story is a good illustration of that.