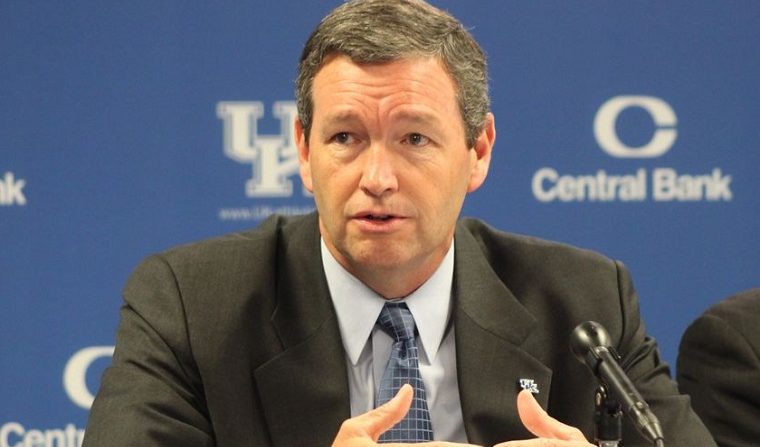 The internet has rendered the “strongly worded letter” mostly obsolete. However, if Ron Swanson taught us anything, it’s that there’s nothing an old, resentful curmudgeon can’t still accomplish with an opinion and a typewriter.

University of Kentucky athletics director Mitch Barnhart has been stewing for weeks over the officiating during the Music City Bowl, which he feels hurt his Wildcats and ended up aiding Northwestern en route to their 24-23 victory.

Kentucky AD Mitch Barnhart wrote a letter on Jan. 5 to the Pac-12 about the team’s complaints with the officials in the Music City Bowl. https://t.co/LQt26OwKUn

Remember, Benny Snell got ejected for this: pic.twitter.com/uLSTjFrbEq

The game had its fair share of curious calls, but none more baffling than when UK running back Benny Snell was ejected after touching a referee who was attempting to help him up off the ground. At worst, Snell was overzealous in rebuffing the ref, whose help he did not need.

Clearly, it was something that barely called for a penalty, let alone an ejection. Barnhart took to Twitter following the game to defend his player.

Benny, who has been a quality young man in our program, has my full support and the support of Coach Stoops and our football program.

Our team is worthy of praise for their preparation for the bowl and their response to adversity in the game. I know Benny and his teammates are excited to get back to work and continue to make the #BBN proud in 2018. #WeAreUK

That didn’t quite do it for Barnhart, however. According to Kentucky.com, the AD sent an official letter to the Pac-12 Conference, whose referees were involved in the bowl game. They also posted a copy of the letter with a few redacted portions to officially protect student-athletes.

The letter is dated January 5, two days after the mini-tweetstorm. While the letter starts out as a defense of Snell, he also brings up moments in the game where he felt player safety was disregarded. He specifically noted a late hit against UK quarterback Stephen Johnson, who was injured and no penalty was called.

Barnhart saves his strongest condemnation, however, for head referee Chris Coyte and members of his crew.

Specifically, head referee Chris Coyte seemed to have no care for our injured player or willingness to allow our team a few moments to prepare a substitute quarterback to replace him, which is normal protocol in such a situation. His interaction with our staff, in my opinion, did not meet the standards of professionalism needed to manage the difficult task of officiating a high-level college football game. In addition, as frustration mounted, line judge Tim Messuri similarly failed to meet those standards of professionalism. Messuri, hearing that frustration, screamed to our staff ‘Do you want some more of this?’ Threatening more penalties like the unsportsmanlike conduct penalty called on our bench in the midst of this incident.

Just to even things out, Northwestern also had some issues with the referees in the game. Pat Fitzgerald said the ejection of linebacker Paddy Fisher for targeting “might be the worst call I have ever seen in the history of college football.” ESPN’s announcing crew agreed with the sentiment.

Per Kentucky.com, the Pac-12 has yet to respond to the letter.