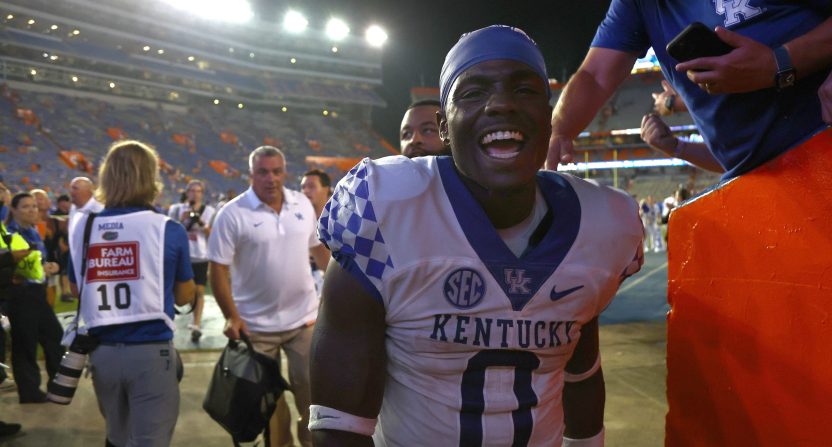 After defeating Miami (Ohio) in the season’s first game, the Kentucky Wildcats got their SEC schedule started on Saturday with a trip to Gainesville to take on Florida. And if defeating the RedHawks didn’t capture the attention of the college football world, what happened at The Swamp on Saturday night certainly did.

Florida got the better of the action early. But the Wildcats got a key interception which set up a touchdown late in the second quarter, trimming their halftime deficit to 16-13. The second half was all Kentucky, with the Gators mustering little on offense. Florida’s longest drive went 36 yards over seven plays and ended in a pick-six, which proved to be the game-winner. The Wildcats offense, meanwhile, produced two second-half possessions that ended in field goals. With that, Kentucky won 26-16.

With that, a controversy that had been tempered re-emerged, at least in the college football world. In August, Wildcats basketball coach John Calipari publicly sought out a new practice facility, calling Kentucky a “basketball school,” while noting that Alabama and Georgia were football schools. That resulted in some bad feelings from football coach Mark Stoops.

Calipari apologized and for the most part, the feud has quieted down. But following this win — Kentucky’s second in a row against Florida and its last three tries at The Swamp — it was brought up again.

I think my friend @UKCoachCalipari would agree – Kentucky is a football school!!! Big time win!

The nationally ranked 2-0 Kentucky “not a football school, but kinda” Wildcats 🔥

WIRED: Kentucky is the ONLY school that's good at football this year

Kentucky FB needs to play St. Peter’s to fully complete their transition to a football school

Saturday’s win was also the 61st at Kentucky for Stoops. That makes him the program’s winningest coach, passing Bear Bryant.

Kentucky coach Mark Stoops recorded his 61st win today as the Wildcats’ head football coach, breaking a tie with Bear Bryant for the most victories in school history. pic.twitter.com/Uc88fhbsbh

And in an interesting twist, Bryant left Kentucky for Texas A&M after the 1953 season, feeling that his football program would always play second fiddle to Adolph Rupp’s basketball program.

Perhaps, nearly 70 years later, the Wildcats have finally figured out how to balance the two programs.