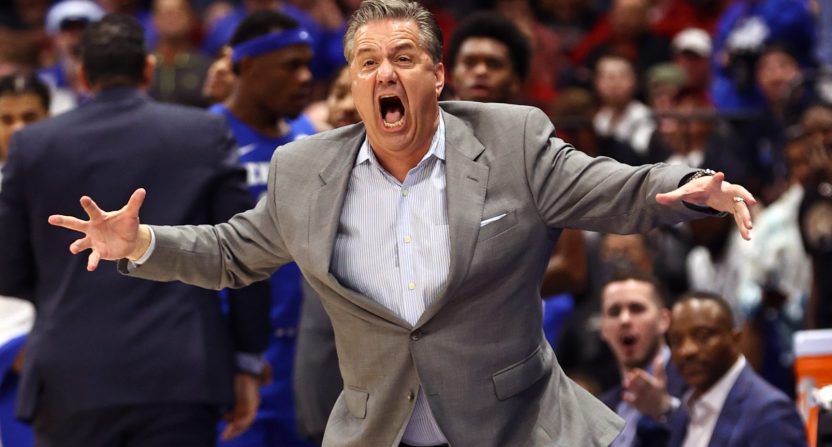 It’s no shock to anyone to say that Kentucky basketball is big. Traditionally speaking, they are one of the elite NCAA basketball programs and head coach John Calipari wants the school to act like they are the top dog too.

Calipari is demanding that the school give his program a new practice facility. He even said he’d raise the money himself and get some former Wildcat basketball players to give to.

“This state deserves that,” he said in an interview with The Athletic. “Everybody should be behind this. Our administration. Look, our baseball facility might be the nicest in the country, and I’m happy about that. Our football facility, we spent $200 million. Soccer, unbelievable. Now, the track — I love it. And now, I would say, the administration should be like, we’re doing this. How about the state? If this is the University of Kentucky, and it’s the basketball program for the state, which it is, how about the state says, ‘We’re in. We’re gonna invest.’ I’ll tell you right now, Anthony Davis gave $350,000 on a text to me (for flood relief). Do you know what our former players would do? They just gotta see it: What is it? So it’s the next challenge that we all have.”

Calipari is clearly embarrassed to know that one of the blue blood programs of college basketball has older facilities and that the university has been investing in many other programs. And he doesn’t seem to hold many of those other programs in high esteem either.

Basketball school? I thought we competed in the SEC? #4straightpostseasonwins https://t.co/xUoKmUeonH

Kentucky fans and media folks weighed in on the subject and coach drama, with many supporting Coach Stoops.

Calipari could've built up facility needs without taking away from what Kentucky Football is doing. Same team, guys.

What a stupid thing for Cal to say because it benefits nobody.

While there are still fans who are behind Coach Cal.

I love what Stoops has done for the program and he should be praised for his success, but comparing it to the basketball success is asinine

While many schools find themselves in battle with other schools, it appears that the sports programs within Kentucky are locked in an intense rivalry all their own.