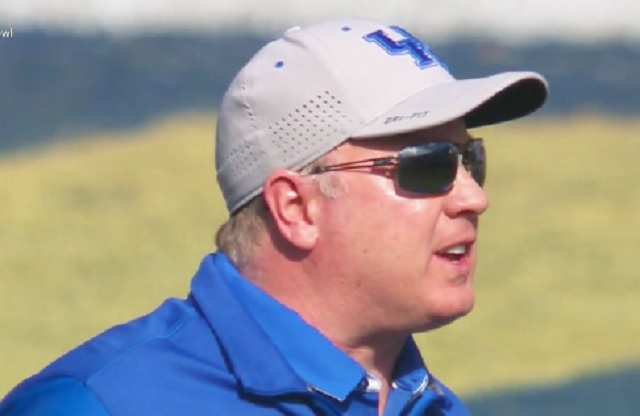 Saturday’s TaxSlayer Bowl got a bit interesting beyond the on-field action between the Kentucky Wildcats and Georgia Tech Yellow Jackets during the first quarter, as the two head coaches exchanged words over blocking techniques and resulting injuries.

Early on, Kentucky lost both defensive end Alvonte Bell and tackle Courtney Miggins to injuries on consecutive plays. Both appeared to get hurt as a result of how they were being blocked. But were the blocks that knocked Bell and Miggins out of the game illegal? Kentucky coach Mark Stoops certainly thought so, evidently believing that Georgia Tech was toeing the line between cut blocking, which is allowed, and chop blocking, now an illegal play.

Miggins, in particular, appeared to suffer his injury while being blocked below the waist. Blocking low is allowed, even below the knees, but Miggins was also being blocked up high. That makes it a chop block and not supposed to be a legal play, because of what can result from a defensive player being vulnerable, especially regarding leg injuries. And that is what compelled Stoops to walk out to the middle of the field while Miggins was being worked on by trainers and yell at Georgia Tech coach Paul Johnson.

Cut blocking has been a controversial aspect of Johnson’s triple-option offense for years, and several opposing head coaches have taken issue with blocking techniques that inch toward being illegal and dangerous for defensive players.

David Cutcliffe said a few years back after losing to GT that he wants to get rid of cut-blocking. https://t.co/oRmRgA44vf https://t.co/VOyp2VZnTB

Duke coach David Cutcliffe was particularly critical of cut blocking three years ago after a 38-14 loss to Georgia Tech, as reported by the Wilmington Star News‘ Brett Friedlander:

“Player safety is such a big issue,” Cutcliffe said. “Blocking below the waist in high school is gone. There’s a lot of talk about it in the NFL right now. I’ll let the rule-makers worry about that. But right now, every rule that has been a major change in the game has been from the emphasis of player safety.”

At the time, Johnson said he’d be fine with outlawing cut blocking — if anyone could show him data that it directly leads to player injuries.

“Every time it comes up, I go, ‘Well, where’s the research?’ Surely somebody can research that. You’ve got videotape. You’ve got film. You can go back and look and see. There’s probably a reason nobody’s done it.”

The technique is obviously taught by the Georgia Tech coaches and heavily encouraged. Guard Parker Braun has been singled out, as reported by the Atlanta Journal-Constitution‘s Ken Sugiura, for blocking more defensive players to the ground than any other Yellow Jackets lineman this season.

For what it’s worth, Miggins was able to return to the game after being checked by the Kentucky training staff, and Bell is also expected to return for the second half of the TaxSlayer Bowl. But Stoops still isn’t happy about how Georgia Tech offensive lineman are blocking his defensive players and has been talking to the officials about it.

Report: At half Coach Stoops kicked the ref locker room door. Knocked over a Gatorade cooler. They had to pull him back to the locker room.

At halftime, Georgia Tech leads Kentucky, 20-3. We’ll see if he and Johnson have words about this during the postgame handshake, if there is one. That could end up being the most compelling moment of this bowl game.