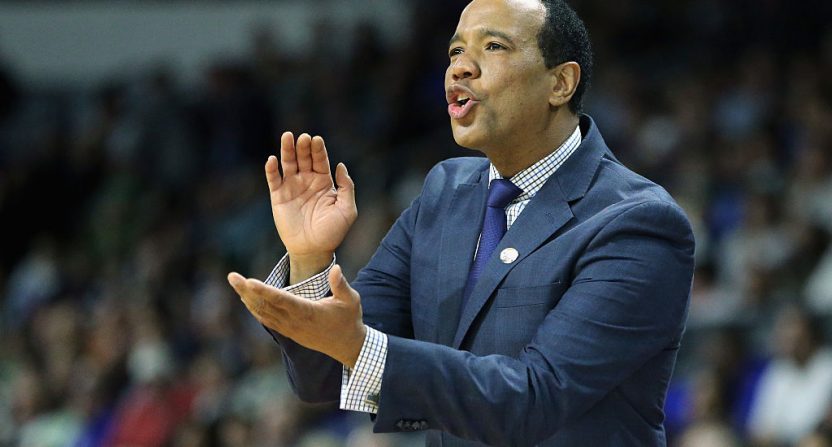 For the first time in a long time, NC State has a coach who didn’t fail at his previous job.

The Wolfpack have inked Kevin Keatts, fresh off another NCAA Tournament appearance with UNC-Wilmington, to a six-year deal, according to ESPN‘s Jeff Goodman.

After a 15-17 season under Mark Gottfried was so bad that one fan started reading a Volvo owners manual during a game, the product on the court should start improving under a coach who won at least a share of three CAA titles in as many seasons.

Picking up a hot mid-major coach is something new for NC State.

Sidney Lowe, who coached the Wolfpack from 2006 to 2011, went 79-228 in five seasons as an NBA coach, and resigned after an 0-8 start with the Memphis Grizzlies in 2002-03. NC State then named him head coach after three seasons as an NBA assistant.

Gottfried built Alabama into an SEC champion and Elite Eight program, but then drove the Crimson Tide right back to the bottom before resigning in the middle of the 2008-09 season.

The 44-year-old Keatts has been a head coach for only three years, but what a three years they have been. Just ask the UNC-Wilmington fans, although they’re probably still unresponsive after losing an NCAA Tournament heartbreaker and their head coach in a matter of 24 hours.

Keatts took over a Seahawks program that went 9-23 under Buzz Peterson the year before and had gone six years without a winning season. In year one under Keatts, UNC-Wilmington finished 18-14, tied for the CAA regular season title and played the program’s first postseason game in nine years, albeit in the CIT.

The following season, the Seahawks tied for the CAA title again, and this time won the conference tournament to get into the NCAAs.

And anyone who paid attention to college basketball this season knows how good Wilmington was. Even when everyone said No. 5 seed Virginia was the toughest matchup the Seahawks could draw in the NCAA Tournament, for the second straight year they nearly pulled off an upset over one of the ACC’s top teams, losing 76-71.

Keatts developed some of Peterson’s players into productive units, but he also recruited well in his short time there. His first two teams had some Peterson leftovers, except for one player, Chuck Ogbodo, who played less than eight minutes per game.

So hiring Keatts is a win for NC State. Short of Gregg Marshall and Archie Miller, Keatts’ name was the hottest in the market.

The bigger question is if NC State is a win for Keatts.

Keatts has already proven he’s a good coach, but the ACC is filled with good coaches. Although Gottfried struggled in his final years at Alabama, he did have a stretch of five straight NCAA Tournament appearances there and won three straight OVC titles previously at Murray State.

The end of his Alabama tenure had many people questioning his hiring at NC State, and rightly so. But Gottfried still got off to a great start with the program with four consecutive NCAA Tournament appearances, although he never finished higher than fourth in the ACC. Yet Gottfried still entered the 2016-17 season on the hot seat because of a lone losing year that followed four straight seasons with at least one NCAA Tournament victory.

Even though NC State has not won an ACC title since 1988-89 when Jim Valvano was coaching the team, the program’s expectations remain high.

“It’s a hard situation that I never saw coming, that I never anticipated a year and a half after four straight NCAA Tournaments and two Sweet 16 appearances. We have five teams in our league that haven’t been to the NCAA Tournament since I took over at N.C. State six years ago. That’s tough to swallow.

“There are probably half the schools in this league that would take our last six years and be excited as hell about it. But for some reason at N.C. State it wasn’t good enough. You look round at all these other [ACC] schools and nobody else is compared the way our program is to North Carolina and Duke.

“I poured my heart and soul into N.C. State, and when I took this job I don’t think that anybody honestly would have anticipated four NCAA Tournaments and two Sweet 16s in the first four years. And for me to be honest, I feel like that’s unappreciated by some.’’

Granted those are words that came out of Gottfried’s mouth after he had already been fired, they still speak strongly about the high — and possibly unrealistic — expectations at NC State.

Keatts grew up in the ACC’s footprint in Lynchburg, Virginia, so geographically NC State is a good fit for him. But he will be competing against giants in that conference now. Soon enough, Mike Krzyzewski, Roy Williams, Rick Pitino, Jim Boeheim, and Jim Larranaga will be gone, but even then he’ll be fighting with Tony Bennett, Mike Brey, and Buzz Williams for conference titles.

That’s not an easy job. Then again, those ACC veterans may not be so keen on now sharing their league with a guy who has won a conference title every season he’s been a head coach.