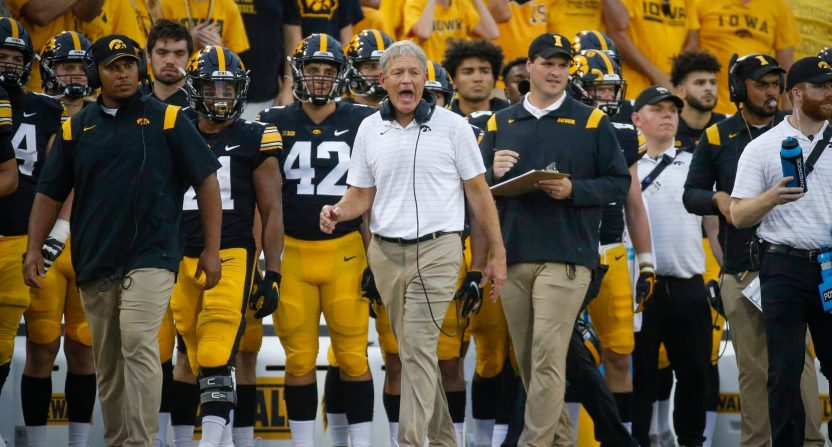 The Iowa Hawkeyes are (almost) on top of the college football world, coming in at No. 2 in the latest AP Poll. Kirk Ferentz’s squad is 6-0, in full command of the Big Ten’s West Division, and coming off a huge 23-20 win over now-No. 7 Penn State.

During that game, there were several times late when Nittany Lions players stayed down with apparent injuries, much to the dismay of the Iowa crowd, which booed with more regularity with each turn. This was especially true when the Hawkeyes had the ball, as the injuries stopped the clock and prevented Iowa from closing out the game. The assumption being that Penn State players were faking injuries in order to get the ball back and try to win.

It’s not an uncommon thing to happen during a football game and it’s safe to assume that, most of the time, players are not faking injuries. But home fans always find a way to feel slighted.

During his press conference on Tuesday, Ferentz certainly didn’t shy away from the presumption that players had been instructed to fake injuries, even going as far as to say that the Iowa crowd “smelled a rat.”

“Football’s a hard, competitive, tough game and fans are into it — just like everybody else is into it,” Ferentz said. “First of all, I know a couple of players were legitimately hurt. I know that. I saw one sitting on the bench. … I know he had an ice bag on his leg. Obviously, the quarterback didn’t come back, so I hope those guys are well. I don’t know what their status is. Nobody wants to see anybody get hurt. Nobody. But I think probably it’s a reaction to the — there were a couple of guys who were down for the count and then were back a play or two later. Our fans aren’t stupid. They’re watching. They know what’s going on.

“I’ve been here 23 years. I think that’s only the second time we’ve seen that kind of stuff going on. I know it’s a topic nationally right now. It was one of the discussions of the rules makers. Nobody knows the answer to it. I also know for a fact that there are two people in our building that have been places where — ‘scuba’ and ‘turtle’ — were the code words. So it goes on. We don’t coach it. Haven’t really been exposed to it. But our fans thought they smelled a rat I guess. I don’t know. So they responded the way they responded.”

That’s quite the bold assertion from a football coach, essentially accusing another coach of faking injuries and having a whole system for doing so. For his part, Franklin said, “that was not part of our plan” and that it wouldn’t have been because it’s not like Iowa runs a tempo offense that needs to be slowed down.

Whether it’s true or not, Ferentz’s comments sure took Twitter by storm and lots of people had thoughts.

Still confused by this. Iowa takes like 2 minutes between plays and had a 33% success rate for the game, 11th-lowest of any team on Saturday. Exactly what momentum was PSU supposed to be stopping by faking injuries? https://t.co/BdoDiCyYKX

Kirk Ferentz has been so much less filtered over the past 18 months.

I couldn’t love it more.

Still waiting on exactly one (1) Iowa fan, coach, or media member to explain why any defense would need to fake injuries against the Iowa offense. https://t.co/MvFwMYKR9b

Confused by the Kirk Ferentz comments on all fronts.

Even if you *do* think the Penn State players were going down on purpose, which makes little sense, what on earth do you have to gain by saying it?

What does he achieve by taking shots at injured college kids?

Right now, it’s entirely possible that Iowa and Penn State could meet again in the Big Ten Championship Game. If that does happen, we’re guessing these comments are going to be discussed beforehand once or twice. In the meantime, it sure does seem like Ferentz and Iowa are ready to back up their ranking with big talk. Now they just have to keep winning to back that up as well.