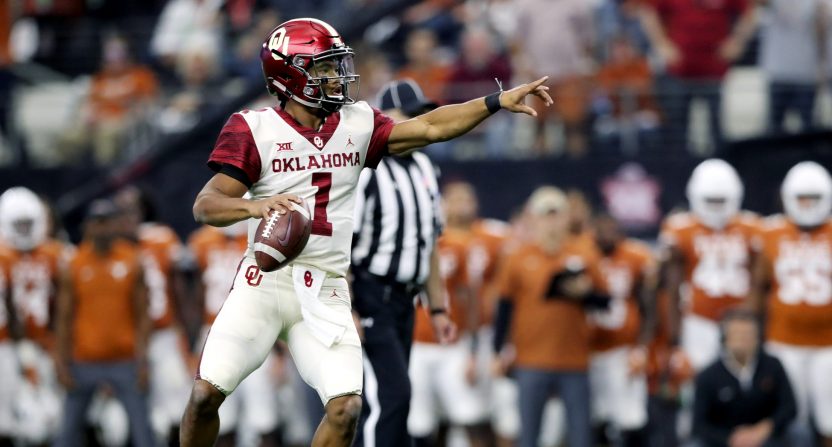 In Oklahoma’s 39-27 victory over Texas in the Big 12 championship game, Kyler Murray put up 379 yards and three touchdowns to cap what has been a wild season for the Sooners quarterback.

Murray closes the books on the (non-Playoff or bowl) season having passed for 4,053 yards and 40 touchdowns with just seven interceptions. He more than likely will not reach the passing yardage put up last year by Baker Mayfield, who of course won the Heisman Trophy while guiding Oklahoma to the College Football Playoff, but Murray has been every bit as much a part of the reason Oklahoma could potentially be heading right back to the playoff as Big 12 champion.

You could even make the argument Murray has been more critical to the success of Oklahoma than Mayfield was a year ago. Not only did Murray have to play essentially the full season without 1,000-yard running back Rodney Anderson, but Murray had more pressure on him to produce on offense because Oklahoma’s defense was a season-long mess that made it essential to score every time Murray took the field. And he delivered more than often.

Murray helped ignite Oklahoma in the Big 12 championship game by orchestrating an impressive late first-half drive, which was given a spark of life courtesy of poor clock management by Texas head coach Tom Herman. After burning a timeout to try and get Oklahoma’s defense to jump offside on a fourth down, the Longhorns ended up punting the ball away to Oklahoma with just over a minute left to play in the half rather than manage to trim another 40 seconds off the clock. The punt from the Oklahoma 46-yard line trickled into the end zone for a touchback. Murray immediately completed pass of 24 yards, 20 yards and 17 yards to move to the Texas 19-yard line. One play after Texas was flagged for a face mask penalty, Murray completed the drive by connecting with tight end Grant Calcaterra for a six-yard go-ahead touchdown.

Murray started the second half clicking as well by completing three passes, drawing a pass interference penalty on Texas on his fourth attempt and picking up a five-yard run for a first down that was followed a couple plays later by a Trey Sermon touchdown run to extend the Texas lead. Later in the fourth quarter, with Texas in desperate need of a stop, Murray would not allow for it. Leading 32-27 following a safety by the Oklahoma defense to make up for a fumble by CeeDee Lamb on a 56-yard pass from Murray, the Sooners quarterback showed off his ability to drop a dime right in the right spot for his receiver, and Calcaterra got to show off some skill too on the dagger.

Every voter will determine what makes a player more worthy of a Heisman vote than another player. Murray’s case will be strengthened compared to Tagovailoa because he had to play more this season and had to continue to lead Oklahoma to wins because the defense was so insufferable all year long. Even in Oklahoma’s only loss of the year, against Texas, Murray nearly pulled off a furious comeback only to see Texas manage to run out the clock before Murray could complete the rally.

Murray will undoubtedly be on his way up to New York as a Heisman Trophy finalist, and his performance in the Big 12 championship game may swing a few first-place votes his way.