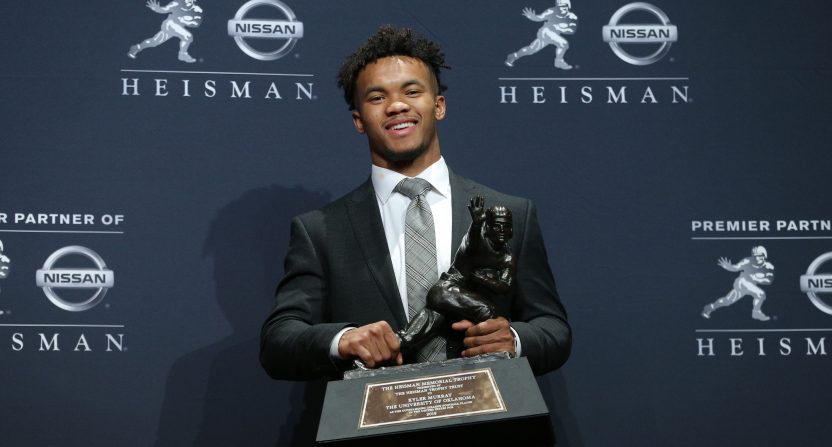 Lincoln Riley was named the head coach of the Oklahoma Sooners at the age of 34. He took over a program that was built to contend for the Big 12 and a spot in the playoff as the successor to Bob Stoops. Just two years into his coaching career, Riley now has as many all-time Heisman Trophy winners under his wing as some of the greatest coaches of all-time, including Alabama’s Nick Saban.

Oklahoma quarterback Kyler Murray became the seventh all-time winner of the Heisman Trophy from Oklahoma Saturday night in New York. In a tight Heisman Trophy race that went down to the wire, Murray powered his way across the finish line in the voting while Alabama quarterback Tua Tagovailoa lost steam down the stretch.

Murray closed out the regular season riding a high that saw his stock soar past Tagovailoa, who had been the popular favorite for the first two-thirds of the season, if not the first three-fourths of it. As Tagovailoa was getting a bit banged up and having his worst game of the year against Georgia in the SEC Championship Game, Murray continued to produce big numbers in leading Oklahoma to the Big 12 championship game, scoring revenge against the only team to defeat the Sooners this season (Texas) in the conference championship. The odds swung in favor of Murray in the last couple of weeks, and the oddsmakers knew how this was going to play out.

The Sooners quarterback received 517 first-place points in the voting, while Tagovailoa only managed to secure 299 first-place votes from the ballots. Murray edged Tagovailoa for the 2018 Heisman Trophy by fewer than 300 total points, 296 points to be exact. Although this was a close race, and far closer than many would have predicted in mid-October, this final tally was not as close as many felt could be the case.

Did the conference championship games impact the voting? You bet

Murray made his early statement with a big day against Texas to capture the Big 12 championship. But then Tagovailoa struggled against Georgia in the SEC Championship Game with a pair of interceptions. He would leave the game banged up and Jalen Hurts would come to the rescue of the Tide. After the conference title games, the votes had to be submitted by the next day, and that was when Murray made his run in the voting.

It’s also worth noting that Tagovailoa didn’t exactly run away with the votes out of the South. Murray received the most points in the voting in every region except the South, but it was really close. Tagovailoa received 375 points in the South, while Tagovailoa picked up 356. For a region dominated by the SEC, that is a bit surprising. Was there a bit of an anti-Alabama bias going on to hold down Tagovailoa in the south, or was the performance in the SEC Championship Game that woeful that even the voters in the region were more willing to vote for Murray?

Even if it got off to a late start, there was no denying that Oklahoma had the best Heisman campaign going for them. Playing off the two-sport stardom of Murray, a draft pick of the Oakland Athletics and now a player receiving some NFL draft buzz, Oklahoma rolled out a Kyler Knows campaign mimicking the classic Bo Knows ads featuring former two-sport athlete and Heisman Trophy winner Bo Jackson.

This was a big one for Oklahoma. For starters, having back-to-back Heisman Trophy winners is a rare feat that has only been accomplished four times in the history of the award. Baker Mayfield won the Heisman Trophy last season, and his successor took home the trophy this season. The last school to do it was USC in 2004 and 2005 with Matt Leinart and Reggie Bush (which of course has been vacated, but we’ll count it here because it still happened).

Murray’s Heisman Trophy gives Oklahoma a total of seven Heisman Trophy winners in school history, which is tied for the most all-time with Notre Dame and Ohio State. Dwayne Haskins finished third in the voting, falling well shy of being able to push the Buckeyes ahead of the Fighting Irish. And yes, USC also has seven all-time Heisman Trophy winners, with the one being vacated. Unofficially, USC is tied as well.

But for Lincoln Riley to step into his role as a head coach and already have two Big 12 championships, two College Football Playoff berths and two Heisman Trophy winners in as many years is simply astounding. Yes, Riley stepped into a very favorable position for his first career head coaching opportunity, but to be able to accomplish that much so quickly is simply unprecedented.

Riley now has as many Heisman Trophy winners as Nick Saban, Bobby Bowden and Riley’s predecessor, Bob Stoops. He has more Heisman Trophy winners than Urban Meyer, Joe Paterno and Steve Spurrier (although Spurrier won one himself too). And Riley is just getting started with his coaching career at the youthful age of 35. He already has the ability to go on the recruiting trail and say definitively he knows what it takes to build a Heisman Trophy quarterback and that one of them went No. 1 in the NFL draft. We’ll see what the future holds for Murray, who continues to be connected to potential NFL speculation despite having a baseball career waiting for him in the A’s farm system.

If you had any doubts about Riley taking over Oklahoma in the fashion he did two springs ago, they should be gone by now. It may be too early to label Oklahoma redshirt sophomore quarterback Austin Kendall the favorite to win the 2019 Heisman Trophy, but the way things are going in Norman, would it really be a surprise to see him in the mix if Murray moves on?