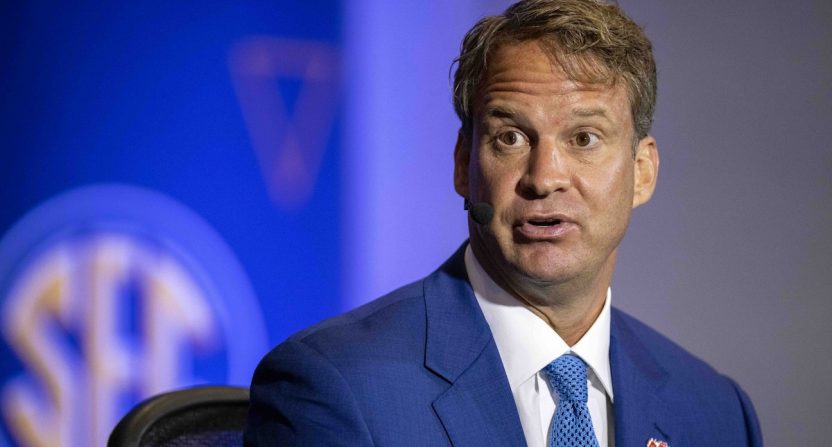 There’s a lot of shock and awe going on right now about the way the transfer portal and NIL rights have changed college football. Many people who are used to the way things have worked for a long time are horrified by the flexibility and autonomy that student-athletes now have to make decisions and then change their minds. It rubs up against the power system in place that allows coaches to chastise players for any perceived lack of loyalty while also leaving in the middle of the night to take another job.

Ole Miss head coach Lane Kiffin shared his thoughts on the way transfers and NIL are changing the sport and he sees it as a new era of “free agency” in college football.

“I don’t think people really say it this way, but let’s not make a mistake, we have free agency in college football,” Kiffin said, per InsideTheRebels. “And the kids go to where they’re going to pay the most. No one else is saying that maybe, but if the kid says, ‘This is what I’m getting here for NIL.’ It is what it is. Free agency has been created in college football…except you can’t lock people into a contract. They can go at any time. It’s a new world that we’re in. Sometimes they want to come to you and say, ‘I get this much money if I go there.’ This is just a whole new thing to deal with.”

Kiffin, who has left multiple head coaching jobs in what can only be described as “free agency” as well, thinks the new way of doing things is negatively impacting high school recruiting, as some players who might have received a scholarship offer will now miss out because a school may fill that need via the transfer portal instead.

“(The NCAA) did give relief this year with the extra ones,” Kiffin said. “And getting out on the road, there is a lot of frustration with junior college coaches and high school coaches, because they feel like kids that were right on the verge of getting offers and going places that were at the bottom of the class, just now aren’t. Because people aren’t…they’re using them up on transfers. So now they’ve got high school kids with nowhere to go where they would have had places. Like anything, usually, when you create something to solve this issue over here it creates other issues. There’s a lot of issues with it. You’ve got your own guys, and now you’re dealing with guys…they want to go…but you still want them to play in the game or practice and stuff. Now we really have guys in the free agency market going around to visits that are still practicing and playing here.”

Kiffin’s argument doesn’t really make too much sense. Yes, if you change one thing, it affects others. But if a school doesn’t offer a scholarship because it gets that player via transfer, surely that means the school that lost the transfer can offer a scholarship instead?

It feels a bit like people are just coming up with whatever argument fits their own narrative to say that transfers and NIL are bad when the truth is that they’re simply new tools that change the way business is done in college football. Just because the old system lasted a long time that doesn’t mean it was equitable for everyone. And people in Kiffin’s position don’t like that loss of power.