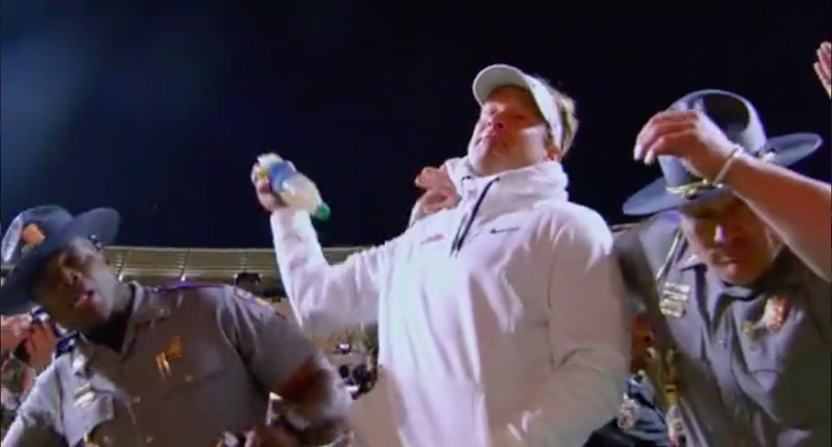 The Ole Miss Rebels got out of Knoxville last week with a victory but not before some Tennessee Volunteers fans made them avoid some projectiles thrown on the field. Some of the items thrown included vape pens, a mustard bottle, and plenty of beer cans. Head coach Lane Kiffin even had a golf ball thrown in his direction and other items headed in his direction as he left the field.

Kiffin stopped by “The Paul Finebaum Show” on Friday to talk about Ole Miss and many of the questions involved in that game and the throwing incidents. While Kiffin said that he never actually felt like he was in danger, he did have some disappointing thoughts for the cops who were tasked with keeping him safe.

Kiffin told Finebaum that as soon as items started hitting the field, he told his players to keep their helmets on to stay safe. And while he was happy with how they handled it, he quickly noted that the cops on the sidelines didn’t handle things as well, in his mind.

“Players keep your helmets on and I kind of moved about 5 yards off the sidelines,” Kiffin said. “There were some cops behind me, which by the way, they didn’t do a very good job.”

“Because when I was walking off, I had the cops that are supposed to protect you,” Kiffin said. “They throw a bottle. The cops duck and I grab the bottle. So I was kind of down on our cops.”

Video of the event in question basically confirms what Kiffin was saying. You can see the bottle head towards Kiffin, who grabs it while the police officers on each side of him duck out of the way.

Asked for one for the road and u threw me this 🤷🏼 great game and atmosphere last night need that same thing here @OleMissFB this weekend for @EliManning #ComeToTheSip pic.twitter.com/wmxLXGjrBl

Kiffin was mostly being playful though as the two quipped about the experience.

“Were they your cops or their cops?” Finebaum asked Kiffin.

“I think they were a mixture,” Kiffin replied.

“They definitely had speed, though.,” said Finebaum.

While those who dislike Kiffin might find a reason to take offense to all of this, Kiffin clearly knows what he’s doing and is having some fun with what was a pretty wild experience.