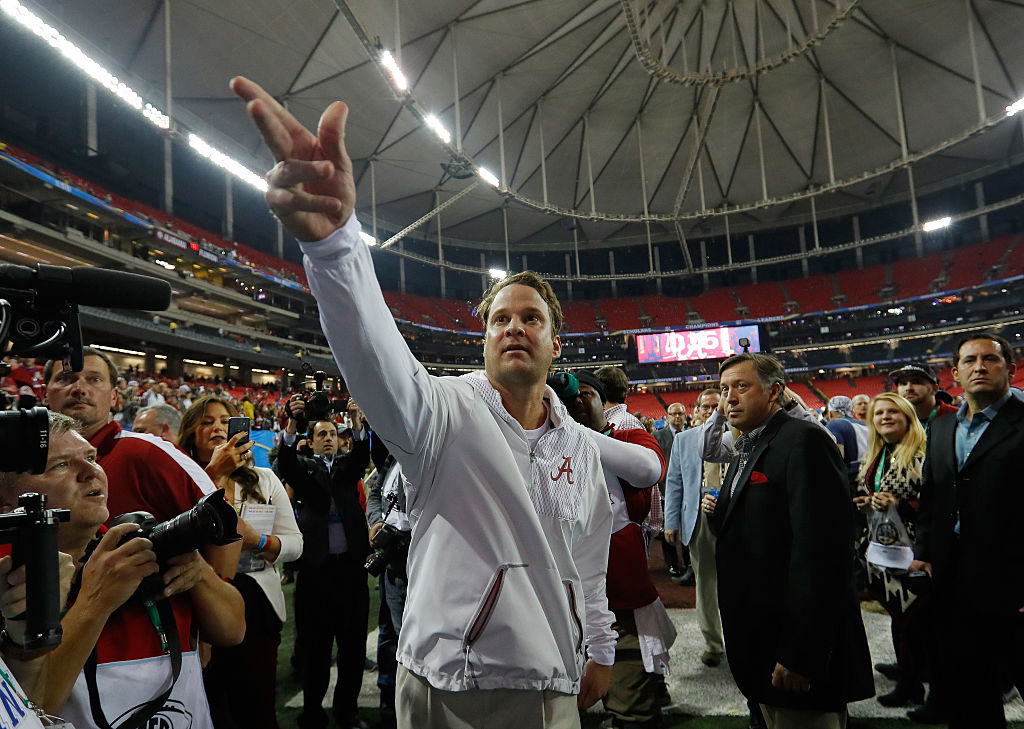 On December 14th, word broke out that Lane Kiffin had already landed his first big recruit in quarterback De’Andre Johnson. The news was somewhat troubling, as Johnson has an arrest for domestic violence on his ledger already. This week, Kiffin is trying to distance himself from the recruit’s issues and pass the buck to the school’s former coaches.

From our piece on December 14th, one day after agreeing to become the new head coach at Florida Atlantic University, Kiffin landed the former ESPN Top 300 recruit Johnson a year after he was the 7th best QB in his class. Johnson originally chose Florida State out of high school, but was dismissed from the Seminoles’ program in July of 2015 after he was caught on video at a bar punching a woman.

Florida State originally suspended him and later dismissed him from the program, something that drew praise from school President John Thrasher:

“While it is always important to adhere to due process, having now seen the physical altercation captured on video, there is no question in my mind that Coach Fisher made the correct decisions,” Thrasher said. “I expect all students at Florida State University, including student-athletes, to adhere to the highest level of conduct. I have no tolerance for the kind of behavior exhibited in this case. Florida State University was forged from an outstanding college for women and has a long tradition of being a caring community that demands students be treated with dignity and respect.”

Two weeks after the news first broke of Johnson joining Kiffin at FAU, the Owls made the signing of Johnson official. While Kiffin isn’t working at FAU quite yet as he finishes the season as Alabama’s offensive coordinator, he did make it a point to say he has never met Johnson and that the previous coaching staff started recruiting him in the first place.

“I wouldn’t know him if he walked in the room,” Kiffin told reporters on Wednesday. “It was something the president, the athletic director, the previous staff had done a ton of research. They had connections at the junior college where he was at, they had brought him in, spent 48 hours around him, did a ton of research.

“They had already sent him his papers. That was something that was totally in place and was already done before I even got there.”

Johnson moves to FAU from East Mississippi Community College, the same school the hit Netflix series “Last Chance U” focuses on. He scored 31 touchdowns for EMCC last season and will take his three years of eligibility to FAU starting in January.

Two weeks ago when news first broke of Johnson joining the Owls, the school released a statement saying the quarterback would work with the Mentors for Violence Prevention program and FAU Student Affairs on campus in an effort to “develop educational programming for our campus community.”

“The unfortunate incident that occurred in June 2015 that involved De’Andre has been adjudicated through the legal system,” the statement also said. “De’Andre has shown he is committed to using his platform to be a positive advocate for violence prevention, self-control and decision-making.”

Kiffin recently added a new offensive coordinator to his staff at FAU in Kendal Briles, who was most recently the OC at Baylor and is the son of Art Briles. That in itself is another domestic/sexual violence issue, as the elder Briles was fired in May for how he handled the Baylor case.

“I think the Kendal situation,” Kiffin said, “I don’t think because you’re on the staff and there’s an issue going on that no one said you’re directly involved in the issue, that it should follow you. I think that’s a different situation.”