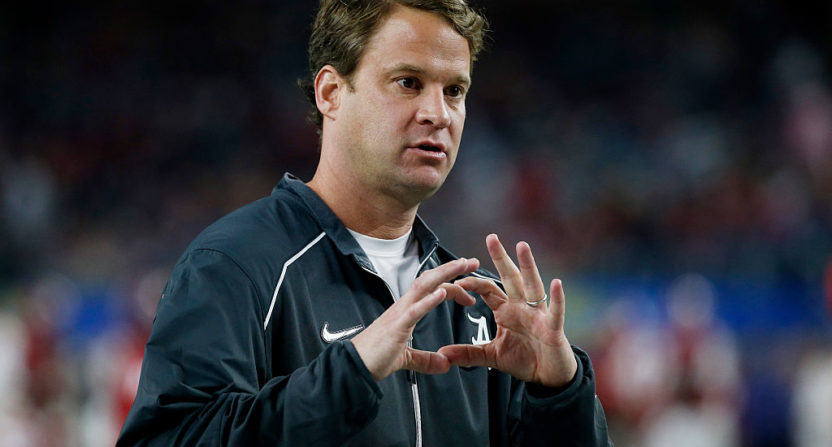 College football coaches reaching out to middle schoolers is nothing new, and FAU head coach Lane Kiffin is certainly no stranger to the ridiculous practice of opening up the recruiting process with America’s youth. His latest eyebrow-raising scholarship offer will surely dust up some emotions among Tennessee faithful, as Kiffin has offered a football scholarship to Kaden Martin, the son of former Tennessee quarterback Tee Martin.

Bruce Feldman of FOX Sports reported on his Facebook page Kiffin and FAU became the first football program to offer a football scholarship to the younger Martin, who is currently in line to sign in the Class of 2022 for those planning ahead. As a football prospect at such an early age, Kaden Martin already has the look of a future college prospect with his 5′-11″ 175-lb frame in seventh grade. This kid hasn’t even played high school football yet, so who knows what will happen as he continues to grow and get stronger along the way. Having a father who led Tennessee to a national championship (immediately after the Peyton Manning era) surely helps. The younger Martin is also a baseball talent as well.

Odds are Kaden Martin was going to pop up on the recruiting radar soon enough. Having a father who is now an assistant coach at USC helps that cause as well. So how did Kiffin get his foot in the door so early? That is likely in part due to the working relationship previously held between Kiffin and Tee Martin at USC.

In the bigger picture here, there really should be some sort of NCAA oversight in recruiting when it comes to when offers to players can be extended. Kids in middle school should not be receiving scholarship offers, especially when they still have one more year before evening stepping foot in high school. But for now, there are no restrictions and Kiffin is playing within the rules as he looks to build something at FAU.

If Kaden Martin becomes anywhere close the talent his dad was at Tennessee, then there could be more offers coming his way soon enough. And in recruiting, being first is not always the most important factor. Kiffin should know. He tried this stunt once before as USC’s head coach when he offered a scholarship to David Sills in 2010 when Sills was in seventh grade. What happened to Sills? He played one season at West Virginia as a wide receiver, took a detour to a junior college to play quarterback, and is now back at West Virginia as a wide receiver.