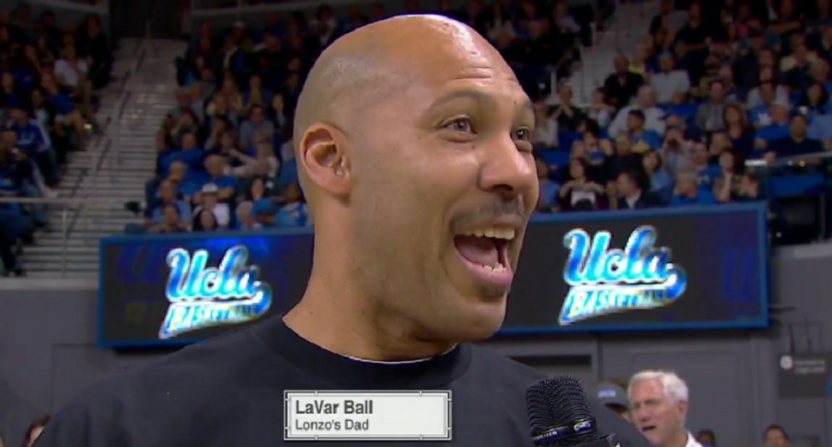 LaVar Ball should really just shut up at this point. On Thursday, he told the Los Angeles Daily News that UCLA failed to win a championship because the white teammates surrounding his son Lonzo Ball, the Bruins’ point guard and a projected top-five pick, were too slow:

“Realistically you can’t win no championship with three white guys because the foot speed is too slow,” LaVar Ball said. “I told Lonzo – ‘One of these games you might need to go for 30 or 40 points.’ It turned out the that was the one game. Then once they get to the Elite 8, they’re right there.”

The three white guys Ball refers to here are Bruins starters T.J. Leaf, Bryce Alford, and Thomas Welsh. Leaf was the team’s leading scorer at 18.2 points per game and is projected to go in the first round of this year’s NBA Draft. Alford was the team’s second-leading scorer and among the nation’s leaders with 116 threes. Welsh, while generally considered the worst player of UCLA’s six main players, was still the leading rebounder and shot-blocker.

And in UCLA’s season-ending loss to Kentucky in the Sweet 16, those guys played fine. Better than Lonzo, actually.

Leaf, Alford, and Welsh combined for 39 points on 53.5 percent shooting. Ball had 10 points on 4-of-10 shooting, eight assists and four turnovers. He also got beat off the dribble time and time again as Kentucky point guard De’Aaron Fox went for 39 points on 20 shots.

Now, LaVar also said Lonzo pulled his hamstring at an unidentified part during the game. That’s possible — Lonzo famously played through a dislocated finger without anybody knowing during Chino Hills High School’s championship run last year. But it’s also curious that no one mentioned the injury until two weeks after the loss to Kentucky occurred.

Anybody who has followed basketball news over the last few months has heard all of LaVar Ball’s bullshit. It started with him guaranteeing a UCLA national title early in the season. Then he said Lonzo Ball is already a better basketball player than Steph Curry. He said Lonzo would play only for the Lakers. LaVar also said he could beat Michael Jordan in one-on-one. It turns out he sucks at basketball.

And because of the elder Ball saying dumb thing after dumb thing, everything Lonzo says is getting viewed with greater scrutiny. We saw this happen when Lonzo said he believes he is better than Washington guard Markelle Fultz, who many see as as Ball’s top competition for the No. 1 pick. Ball could have provided a more PR-friendly answer to avoid any controversy, but you would expect any elite prospect to say he believes himself to be better than another similarly elite prospect. Without confidence, athletes can’t succeed.

So now on Thursday, Lonzo told ESPN’s SportsNation that he’d rather play for the Lakers than be the No. 1 pick, making more headlines.

Remember that the Balls are from Chino Hills, right outside Los Angeles. Is it really that shocking or repulsive that a star basketball player wants to play for his hometown team? If Detroit native Josh Jackson said he’d prefer to play for the Pistons, would anyone bat an eye?

On SportsNation, Ball never said playing for another franchise would make him unhappy. Playing in front of family was the only reason he gave:

“All my family’s in L.A. so to be able to play in front of then, I think that would mean more to me,”

It’s worth noting that in the same SportsNation segment, the hosts asked Ball about the No. 1 pick debate between him and Fultz. Fultz also (unsurprisingly) believes there’s “no doubt” he deserves the top selection.

Here’s how Ball handled the question:

“I already got asked this question. I’ll say it again. I think I can lead a team better than him, and as far as his response, that’s what he should say. He feels he’s the best, I feel I’m the best. Leave it at tha

None of LaVar’s arrogance. No demeaning his UCLA teammates at any point.

But the more LaVar speaks, the more Lonzo’s image gets tainted.