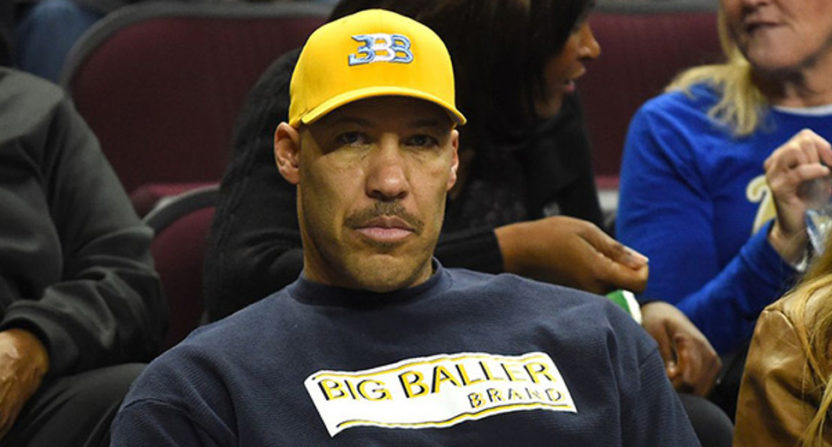 There are few people alive who subscribe to the “any publicity is good publicity” philosophy more than LaVar Ball, so it’s almost impossible to write about him without giving him, in some measure, exactly what he wants.

But sometimes it’s worth doing, and this is one of those times. Ball is starting (or trying to start) his own traveling roadshow league, an effort to give his Nonzo sons a non-Lithuanian, non-high school, non-college place to play. That’s taken the form of the JBA, or Junior Basketball Association, a league for 17-19-year-old players somehow funded by the Big Baller Brand that aims to be a paying alternative to amateur basketball while developing talent for other professional leagues.

It shouldn’t be a shock that some people are skeptical! Here’s the New York Post from a couple of weeks ago:

The Junior Basketball Association, which LaVar said will be funded by his Big Baller Brand, wants to pay its players (from $3,000 to $10,000 a month) and serve as a transitional minor league for the NBA. To get interest right away, the league needs star power.

And LaVar thinks he has the right person to help sell it: his son, LaMelo.

“I have to think about Melo promoting my league,” Ball said in his lengthy exit interview with BC Prienai, as pointed out by USA Today. “I’m looking for a superstar, and I’ve got him right in front of my face. And I developed — I’ve been looking for people to develop Melo. I said, OK, he’s gotta play overseas, he’s gotta do that. But Melo made me understand something. ‘Dad, why don’t you develop me like you did [Lonzo] and [LiAngelo]. Same thing. I can play with anybody. I can play with grown men, I can play with babies, it don’t matter. Just make sure I’m stronger and faster and ready for the NBA when it’s my time to be drafted.’  That’s what we’re looking into right now.

“Maybe we just let Melo run this JBA thing for me. He’d be the face of my league.”

But while it’s one thing when Big Baller Brand, which as far as I can tell is just one man in an apartment that may or may not contain a chicken (financed by Lonzo’s NBA money), tries to hoodwink buyers of overpriced shoes, or bottled water, or whatever other shit LaVar comes up with. But it’s another thing entirely when he’s canvassing the country looking for players to play in this league.

List of Players who have confirmed to me that they were invited to join Big Baller Brand’s New League, the JBA. No one has accepted, very few are even considering. pic.twitter.com/ObPz95ajcw

With those targets out of the way, the league has obviously moved a few rungs down the chain. For example, there’s Kezo Brown, a Simeon High (Chicago) product who was profiled in this piece in the Sun-Times. Kezo was at one point in time a three-star recruiting target for D-1 schools, but now looks to be one of the inaugural members of the JBA.

“I’m sure we are going to get scrutinized for doing this, but you have to think about it,” said Marquis Brown Sr., Kezo’s dad. “He’s still going to go to school, just online.”

The JBA has been holding tryouts all over the country for the past two months. Brown will play for the Chicago team, the Chicago Ballers. He’ll sign a two-year, non-guaranteed contract at a press conference in Los Angeles in June.

“The opportunity arrived a couple days before the tryouts,” Brown Sr. said. “[Former Chicago State coach Tracy] Dildy called and said the JBA is having a tryout and he thought Kezo had a good chance of making it. We talked it over with his mom and then he went for the tryouts and got picked. More than 100 guys were there and they only picked two.”

So, on the surface, there’s nothing inherently wrong with a paying alternative to the NCAA. In fact, if one of those were to emerge, with legitimate backing and funding, it’s possible that venture wouldn’t have been turned down outright by all of those top prospects. This, though, isn’t that. The Brown family also disclosed some details about the contract their son will sign with the league, and this is where it gets shady, and a bit sad:

“One thing looked a little funny,” Brown Sr. said. “If you get any endorsements you get 60 percent and the JBA keeps 40 percent. They are going to sell Kezo’s jersey. They charge like $450 for shoes, so who knows how much they will charge for jerseys. As long as Kezo plays well I don’t think he will have a hard time selling 10,000 jerseys.”

Unpacking that, the salary disparity is striking. There’s a major difference between $3,000 and $10,000 a month. If it were going to be $10,000, it would just be $10,000, which could mean a few things, including deals dependent upon the league hitting certain revenue marks. There’s also the fact that the league is essentially two months long. This is not a lot of money, all things considered.

Moreover, the endorsement deal is decidedly unbalanced. It’s impossible to say without looking at the language itself, but 40% is a lot to give up. Are those deals in perpetuity? Do they cover any and all deals signed while you’re playing in the league? A cynical person might look at this and conclude that the league exists with the hope of LaVar Ball catching lightning in a bottle with a young player and being able to leech off of that player’s endorsements going forward. (So out of character for him.)

And then we get to the sad part, where Kezo’s parents are apparently working off the assumption that this fly-by-night league made up of largely-unknown players will lead to their son selling 10,000 jerseys and reaping the benefits. That’s just not going to happen, and moreover, it feels like that’s an angle being pushed to get kids (and their parents, since we’re talking about some minors) to sign away some of their rights.

It’s as shady as anything else LaVar Ball has ever pushed, to the point that the NCAA almost seems like a good deal in comparison. That’s not an easy feat.