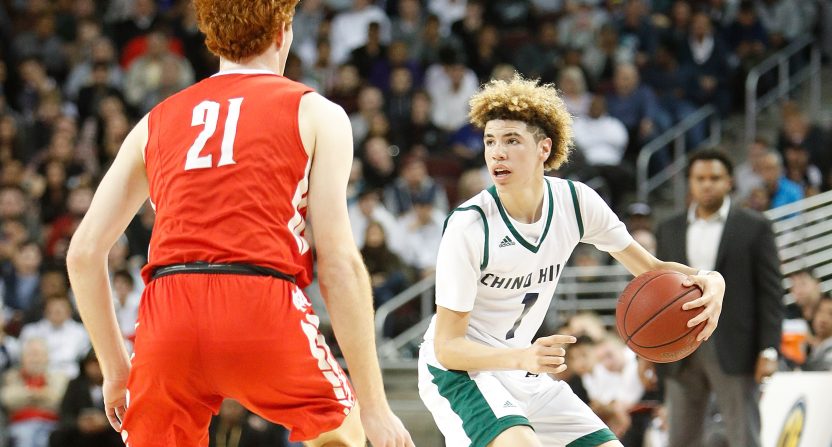 No one manages to be both shocking and entirely predictable quite like LaVar Ball.

The latest move in Ball’s many-step plan to take over the basketball world (with the help of his three sons, who actually play basketball) is the decision to homeschool his youngest progeny, LaMelo, for two years, while training him at the same time.

Stunning news: LaVar Ball said he is pulling junior LaMelo from Chino Hills and will home-school him the next two years and train him.

In an interview with ESPN’s Ramona Shelburne, LaVar said the issue at Chino Hills High School was his son’s coach, who “has his own frame of mind.”

Just spoke to LaVar Ball on why he's pulling his youngest son out of HS and home schooling him. pic.twitter.com/nvUprIJnew

It sounds like much of the problem stems from the coach’s stated plan to curb LaMelo’s famously conscience-free shot selection.

More LaVar: "The coach made a comment the other day. He said, 'all those 50 shots a game, that's going to stop.'

Of course, LaVar didn’t need to pull LaMelo entirely out of school just to get him away from a coach he didn’t like. That suggests there could be another announcement coming, perhaps involving a new high-school team for the junior to play on before AAU season.

As with all things Ball, it’s hard to know what to make of this. Emboldened by the success of Lonzo and, to some extent, recent UCLA enrollee LiAngelo, LaVar seems to be testing all sorts of gimmicks on LaMelo. The young point guard gets to shoot 3-pointers from mid-court, cherrypick all game, forfeit any AAU game in which the ref makes a bad call and wear a signature shoe about a half decade before even the best players usually get one.

LaVar’s latest decision, to lift LaMelo from the high school where he has starred, is shocking in that it’s rare and counter-intuitive but also predictable in that LaVar’s chief goal for his sons seems to be NBA stardom, and you don’t need to know trigonometry or European history to make an All-Star Game.

The people who view everything LaVar does through the most cynical lens will spin this as a crass ploy that deprives his son of an education. A more forgiving interpretation might call it the latest example of LaVar doing whatever it takes to get his son where they both want him to go. LaMelo is the No. 17 player and No. 4 point guard in the Class of 2019, according to 247Sports. He will likely be a millionaire before long, whether or not he walks across the stage at an official high school graduation.

And yes, pulling LaMelo out of school might make it hard to ensure the guard is eligible to play in college. But given LaMelo’s shoe deal and his father’s general inclination toward screwing over those in power, the youngest Ball might not be headed to college anyway.