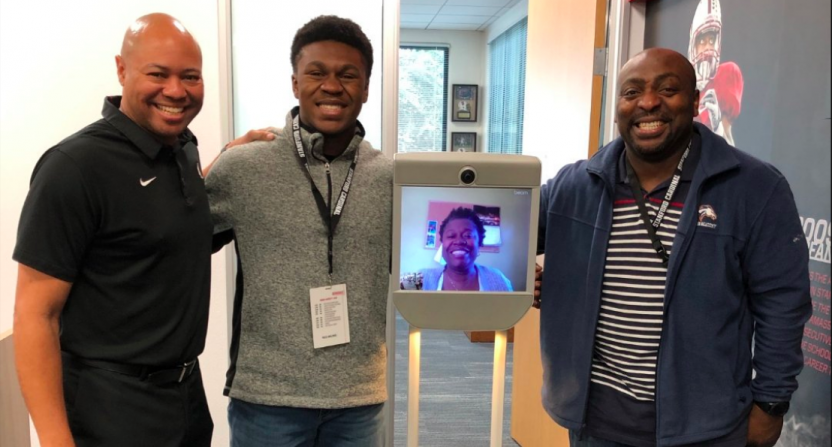 Leave it to the nerds at Stanford to figure out how to bring robots into college football recruiting.

Over the weekend, Milton Academy running back/linebacker Kalel Mullings visited Stanford. Mullings is rated as a four-star prospect by all of the major recruiting services. He currently has offers from over 25 schools, some of which are among the top football programs in the nation. When an athlete like that comes calling, you want to pull out all the stops and make sure nothing gets in the way of you showing him and his family why he needs to commit to your school.

That would have been a problem this past weekend because Mullings’ mother wasn’t able to make the recruiting trip to visit the Cardinal. Given the important role that moms play in the recruiting process, that would be enough to turn things sour for Stanford. There’s no way for mom to see the facilities, get a sense of what life would be like there, and understand what the coaches are like in person.

For most schools, they would have needed to reschedule. But not Stanford. Because Stanford has a Skype robot.

The device is mobile and allowed Kalel’s mom to follow them all around the facilities and get some much-needed facetime with head coach David Shaw.

Mullings certainly seemed to have a good time and the fact that his mom could be a part of the experience upped the ante.

“The vibe was good…Ten to 15 recruits and our families. The highlight for me was sitting down with Coach Shaw in his office with my dad and my mom was on a robot Skype because she wasn’t able to make the trip.”

Don’t be surprised to see tools like this one pop up elsewhere as the college football recruiting game is always being played. It’s probably only a matter of time until we see our first recruiting drone that lets mom and dad follow an entire campus tour from up above.