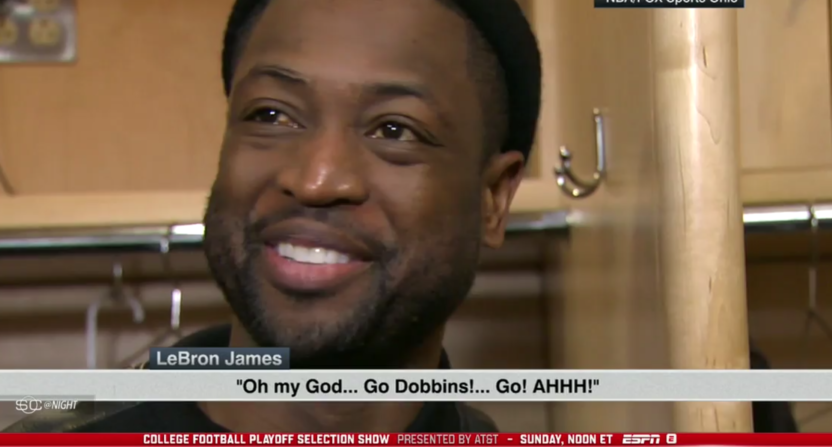 LeBron James is an Ohio State fan, and just because he’s one of the greatest athletes ever doesn’t mean he won’t cheer and scream at the television like a normal lunatic fan.

Below we hear, but do not see LeBron, as he cheers zealously for Ohio State’s J.K. Dobbins on a long run in Saturday night’s Big Ten Championship Game.

This is an entertaining video, in that we get further confirmation LeBron is a legit Ohio State fan and he’s not just going through the motions because he’s from Ohio, plays in Ohio, and more importantly Nike — and in particular his shoes — are worn by Ohio State. But Dwyane Wade’s reaction is what makes the video. A loud and boisterous LeBron is funny to him and he’s unable to hide it. He’s seen it before. He knows what’s coming.

It’s a two-way street of athlete respect, as Dobbins earlier this season paid tribute to LeBron during a touchdown celebration.

I’d love to be able to see LeBron watching the selection show this morning, and hear him yell at the TV whenever they announce the fourth playoff team. Should the Buckeyes get the nod, they’d play on Jan. 1, an off day for the Cavs. However, if they were to end up in the Fiesta Bowl on Dec. 30, the Cavs would be tipping off an hour before kickoff, and we might be treated to another clip of LeBron screaming in the locker room like a totally normal fan who is just losing his damn mind over here.

As an Ohio State grad, watching a Buckeye game with LeBron is now on the “things that will never happen, but it sounds pretty cool” bucket list. I’ll make some Bourbon Whiskey meatballs in a crockpot if that helps at all.