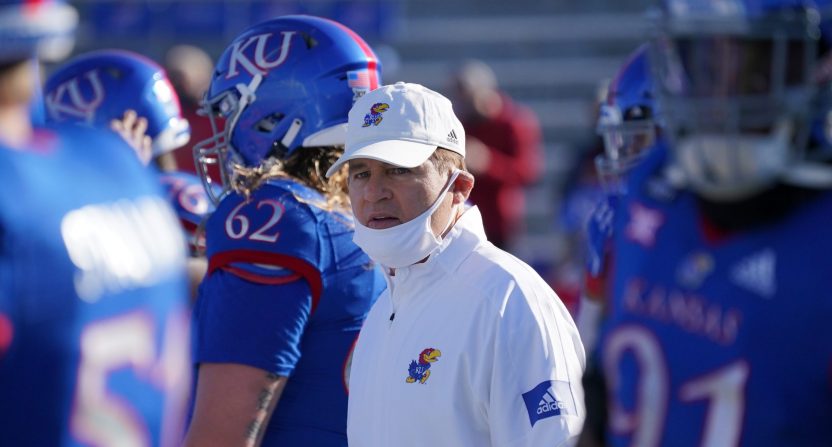 The release of two separate reports on issues of sexual harassment and sexual assault at LSU this week has now led to action against former LSU coach Les Miles at his new job at the University of Kansas. Miles, who coached LSU’s football team from 2005-16 and then took the Kansas job in 2019 (following time as a TV pundit and actor), was central to a 2013 internal report (by law firm Taylor Porter on behalf of LSU) that LSU released Thursday after USA Today sued for access to it under public records laws earlier this year, with that report including allegations of Miles texting female students, taking them to his condo alone, making them feel uncomfortable, and on at least one occasion, kissing a female student in his car and suggesting they go to a hotel, and with it leading to the university banning him from being alone with female student employees.

Meanwhile, the university released a new 148-page report from law firm Husch Blackwell Friday, which covered their “serious institutional failure” on handling Title IX complaints over the past decade. That report included complaints about Miles and complaints about the football team during his tenure. And Friday night, Kansas athletic director Jeff Long told reporters that he’s placed Miles on administrative leave while Kansas staffers review those reports about Miles’ time at LSU:

That action alone may not be the end of it. Many have already called for Miles’ firing at Kansas, including Vahe Gregorian of The Kansas City Star. And Miles’ reputation has taken a major hit over the past two days, perhaps especially from that 2013 report on his own actions. Here are some key portions of that report from Kenny Jacoby, Nancy Armour and Jessica Luther at USA Today:

At the height of his fame as Louisiana State University’s head football coach, Les Miles was accused of texting female students, taking them to his condo alone, making them feel uncomfortable and, on at least one occasion, kissing a student and suggesting they go to a hotel after telling her he could help her career, according to an internal investigative report released by LSU on Thursday.

The investigation, done by law firm Taylor Porter on behalf of LSU in 2013, did not find that Miles had sexual relationships with any of the women. But it found his behavior inappropriate. Miles strongly denied kissing the girl, according to the report. He said that he did nothing wrong and was simply mentoring young women at the university.

…[The report] said “we are unable to determine what occurred” in Miles’ car, where the woman said Miles had kissed her twice. Moreover, as a result of the investigation’s findings, LSU issued Miles a letter of reprimand and required him to sign forms stating that he had read and understood the school’s policies.

The university also ordered him to stop hiring student employees to babysit, cease being alone with them, and attend eight, one-hour sessions with an attorney and pay for it out of his own pocket.

And Friday’s report detailed numerous problems with Title IX reporting during Miles’ tenure, and it also included that Joe Alleva, the LSU athletic director in 2013, recommended firing Miles in June 2013 (two months after the above report) to incoming university president F. King Alexander:

Two months later, Alleva wrote to then-LSU president F. King Alexander and the school’s legal counsel with the recommendation that LSU fire Miles for his conduct.

“I want us to think about which scenario is worse for LSU. Explaining why we let him go or explaining why we let him stay,” Alleva wrote. “I think we have cause. I specifically told him not to text, call or be alone with any student workers and he obviously didn’t listen. I know there are many possible outcomes and much risk either way, but I believe it is in the best interest in the long run to make a break. ”

LSU obviously didn’t fire Miles then; they later let him go after a 2-2 start in 2016. But it certainly seems like his job at Kansas is now in significant jeopardy as a result of his actions at LSU. We’ll see what happens next.

UPDATE: Les Miles is officially out at Kansas. The Jayhawks released a statement on Monday night that the two sides agreed to part ways.

The University of Kansas and Les Miles have mutually agreed to part ways effective immediately.

“This is certainly a difficult day for me and for my famil. I love this university and the young men in our football program. I have truly enjoyed being the head coach at KU and know that it is in a better place now than when I arrived. To our student-athletes, I want you to remember that you came to play for KU and earn a degree here. So, I implore you to stay and build on what we started and do all of the things we talked about doing together. There is a bright future for all of you and for KU Football.”

I’m told Kansas assistant coaches weren’t informed about the decision and some learned through social media when the announcement was made.

And ESPN+ quickly removed the series Miles to Go from the app.

THEY ACTUALLY PULLED THE ENTIRE SHOW OFF ESPN+ https://t.co/C4B7GerldU