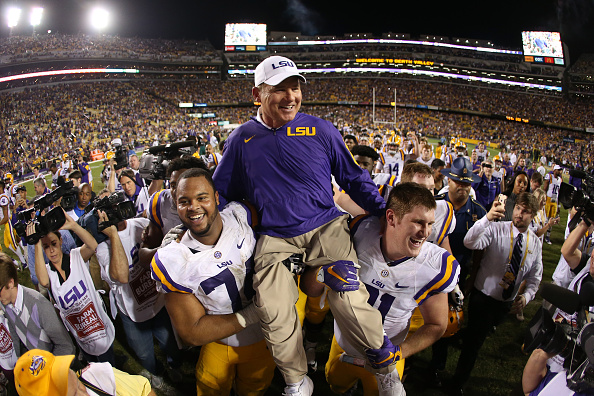 At this time last week, LSU head coach Les Miles was a dead man walking, at least that was the reported narrative. However, it never happened and we apparently now know exactly why Miles isn’t gone at LSU.

According to a report from The Advocate, Miles was as good as gone early last week, with people from LSU meeting with ex-assistant and current Florida State head coach Jimbo Fisher. So, how did Miles go from soon-to-be ex-coach to coach for 2016 and the foreseeable future?

Friends upon high within the LSU system is apparently how.

The Advocate cites sources saying that the deal for Fisher fell through thanks to LSU President F. King Alexander and Louisiana Governor Bobby Jindal.

Ultimately, the overwhelming monetary figure to secure both deals concerned the school’s president and others at a time when the state and school are experiencing budget struggles.

Gov. Bobby Jindal, a friend to Miles, made calls to high-ranking officials before Saturday’s game. He expressed his concern at how the situation had been handled and encouraged officials not to part ways with the coach, a source said.

“LSU made the right decision in retaining Coach Miles,” Jindal said in a statement to The Advocate earlier this week. “As the (second) winningest coach in LSU history, he earned it.”

It pays to have friends in high places, but as was alluded to, there was still another factor involved in this decision — money.

Jimbo Fisher wasn’t going to be a cheap hire for the Bayou Bengals, as he currently makes around $5 million per year already. LSU would likely have to top that or match it, add on another $5 million in the buyout clause that is in Fisher’s contract and another $5 million or so for a new coaching staff.

Add that up and you’ve got $15 million in investment before you even get to what you’d still owe Miles, which is believed to be in the range of $15 million on his current deal.

It all comes up to about $30 million to make this coaching change, and once presented with those numbers it appears LSU’s president did an about face on the removal of Miles as head coach.

Sure, much of the money for Miles’ buyout could’ve been raised from donors and boosters, but it is still a large sum of money to come up with quickly.

Despite all of the hand-wringing, glad-handing, and back room talking, LSU still has its mad hatter with a 111-32 overall record for the Tigers.