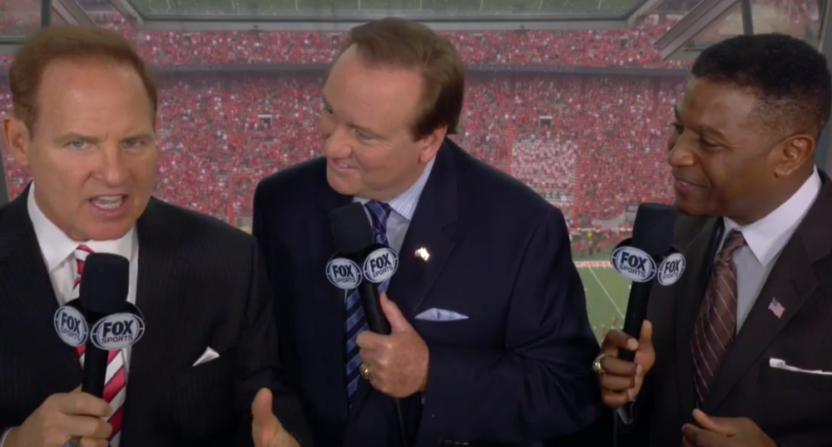 Having former Oklahoma State and LSU coach Les Miles on TV is producing plenty of notable moments. Miles made headlines for wandering around ESPN’s opening-night film room set looking for a restroom while still wearing his microphone, and now that he’s calling games for Fox, he’s making headlines there too.

Miles was an analyst on FS1’s Nebraska Cornhuskers-Northern Illinois Huskies broadcast Saturday with veteran play-by-play man Tim Brando, fellow analyst Spencer Tillman, and sideline reporter Holly Sonders, and he may be a little biased, with his son Ben being a freshman Cornhuskers’ fullback. (That led to Miles previously donning a Nebraska hat on ESPNU’s signing day coverage.)  With 1:04 left in the third quarter and Nebraska trailing 14-7, Northern Illinois linebacker Kyle Pugh knocked down a pass to put the Cornhuskers in a second-and-10 situation. That led to some Miles analysis using “We” about Nebraska, and to Brando correcting him, then explaining this was Miles’ first game and he had Nebraska loyalty thanks to his son:

Later still, with just over three minutes left in the game, Northern Illinois tried to pin Nebraska deep with a punt, but Miles said “get in there” as it rolled into the end zone for a touchback, causing Brando to break out in laughter again and then say “Boy, can you imagine what he’s going to be like when his son actually plays?”:

Soon after that, Tillman said “Coach, if you were arrested for being a Cornhusker fan, I think they’ve got enough evidence to convict you.”

Brando and Miles laughed at that one, with Miles saying “You’re saying right here, right now?” Brando then said “We should mention that Coach Miles’ son Ben is a redshirt freshman H-back and tight end and very happy here. And trying to make his maiden voyage, being down the middle is tough on a coach, not a conventional broadcaster for many years.”

Fox probably didn’t want Miles to so openly root for Nebraska in the booth, especially with this happening time and time again, but Brando and Tillman handled it well, giving Miles some good-natured grief and explaining why his loyalties lie the way they do. And having analysts call their kids’ games is nothing new, even if they’re usually a little more subtle about rooting for them.

Miles does deserve a little slack calling his first game, too, and it should be noted that he did have plenty of nice things to say about Northern Illinois, their players and their coaching staff as well (especially after their 21-17 win became official), so it’s not like he was ripping them up and down the field. And broadcasting curveballs are to be expected from Miles, considering his coaching career. But removing the repeated “we” uses (or just not assigning Miles to more Nebraska games) is probably desirable. At any rate, it made for another memorable broadcasting moment from Miles.