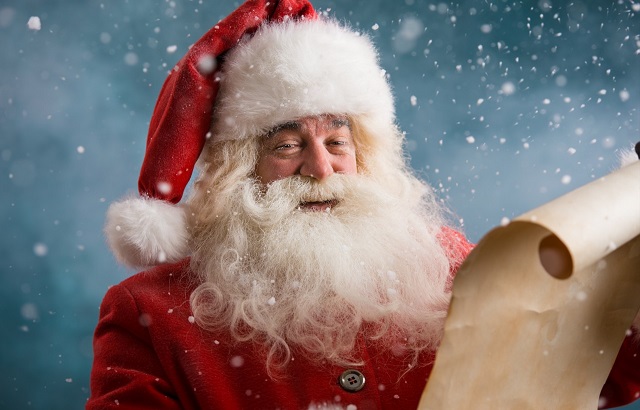 Christmas is almost here. Many children have written to the North Pole with hopes that Santa will give them the gifts they want most. But what about college basketball coaches and players? What do they want from Kris Kringle?

I have been very good this year. Really. I deserve to be on the Nice List. I don’t care what the NCAA says. It’s not my fault someone on my staff went rogue and brought ladies of the evening into the dorms to knock boots with recruits. Leave coal in Andre McGee’s stocking. Not mine. I’ve suffered enough.

Please send me another Final Four appearance to be delivered in March. That would be swell. Also, help me crush that self-promoting scoundrel who works for that other in-state Wednesday night at the KFC Yum! Center. You know who he is. Can’t stand that guy.

I have been very good this year. Really. I have the greatest job in the world with the greatest fans in the world. (Those people are crazy!) They love me because I recruit like a (expletive deleted). Oops, sorry Santa. Got carried away.

Please send me six more McDonald All-Americans. That would be swell. A guaranteed national championship would be nice too, but I’d rather have another armada of freakish athletes. Also, help me crush that self-promoting scoundrel who works for that other in-state Wednesday night at the KFC Yum! Center. You know who he is. Can’t stand that guy.

I have been very good this year. So why do people hate me? I came back for another of college instead of jumping to the NBA. I’m the best player on the best team in college basketball. I’ve got crazy hops – especially for a Caucasian. And I’ve never, ever been in trouble. Well, except for this and this. But I’m a competitor, man.

Please send me love from the fans. I want to be cheered when I go to visiting arenas. I want to be showered with rose petals when the team bus pulls into town. I want little kids of all races, creeds and colors wearing my jersey. This narrative of hate the white guy from Duke is so played out.

I have been very good this year. First, thank you to my hairdo. I have the same hairstyle as I did when I played at Indiana. I look even better now than I did before and no one raises an eyebrow of suspicion.

But I digress. What I want most of all is for people to take me seriously as a great coach. I’m sick of the negativity. Yes, I have to fly economy class and can’t stay in five-star hotels like John Calipari. But I can beat him. I just did earlier this month. I’ve got great recruits. (Lonzo Ball!, T. J. Leaf!)

Please send me a national championship in April so I can rub it in the face of the all the haters.

I have been very good this year. I earned win No. 800. I’ve joined a list that includes guys like Mike Krzyzewski, Bob Knight, Jim Boeheim, Dean Smith and Jim Calhoun. Sure, I might be the best active coach not to have a national championship. But I would have won the 2000 title at Cincinnati if Kenyon Martin didn’t break his leg right before the start of the NCAA Tournament.

But that’s the distant past. I’m writing about the present.

Please send me another black pullover. The rest of my coaching brethren are fools in their sweaty, itchy, uncomfortable and sometimes ill-fitting suits. I’m perfectly comfy.

I have been very good this year. That hasn’t been easy. These are trying times at the ol’ alma mater. I thought by returning to St. John’s that everything would magically revert back to the 80s. You know, back when we were a national power. When we were called the Redmen. Now, we stink and political correctness has changed us to the Red Storm. What is a Red Storm?

What’s worse, I don’t recognize the Big East anymore. Where’s Syracuse? What happened to Connecticut? Who the hell is Creighton? Meanwhile, one of the schools I do know is so much better than us. Villanova just won the national championship. Why can’t that be us?

I have been very good this year. Did you see what my Middle Tennessee team did last season? We beat Mr. March Tom Izzo and Michigan State as a No. 15 seed! Some have called it the biggest upset in the history of the NCAA Tournament.

My Blue Raiders (10-2) already have two major-conference wins over Ole Miss and Vanderbilt. If you put us in the Southeastern Conference, we might be the fourth or fifth team in that league. We have great players. Have you seen Giddy Potts, Jacorey Williams or Reggie Upshaw? These guys can ball. We are seventh in the NCAA RPI.

I have been very good this year. In fact, I’ve been awesome for Central Michigan (8-3)! Guess who’s the leading scoring in the nation? Not Grayson Allen. Not Markelle Fultz, Not Malik Monk. It’s me! I’m the only player in the country averaging 30 points per game and I haven’t scored less than 23 all season. Yes, I struggled a little shooting against Illinois, but I still got mine, pouring in 25 points.

Please send me mo’ buckets! I want to have a 60-point game as soon as possible. I want more people to notice my greatness because I’m absolutely the best.

I have been a real (expletive deleted) this year. Even though I haven’t coached a basketball game since 2008, I’m still a big deal. I hold grudges like a third-world despot. You think I’m going to let bygones be bygones after the way Indiana University treated me?

I don’t care if they build a gold statue of me in front of Assembly Hall. I am never going back to that campus. I built that basketball program. I made it relevant. The fact that they keep reaching out to me to come back is ridiculous.

Please give me the gift of revenge. Promise me that the Hoosiers will never win another championship ever.

I have been very good this year. I have the best job in the world. There are over 400,000 student-athletes and most of them will go pro in something other than sports. Did you know that the graduation rates of student-athletes has steadily risen over the past decade? But all the media wants to talk about are the scandals and lawsuits. I oversee an organization that does wonders for young people.

Please keep me in power and take care of all those nasty little legal affairs in the courts. I have a lot of power and make a lot of money.