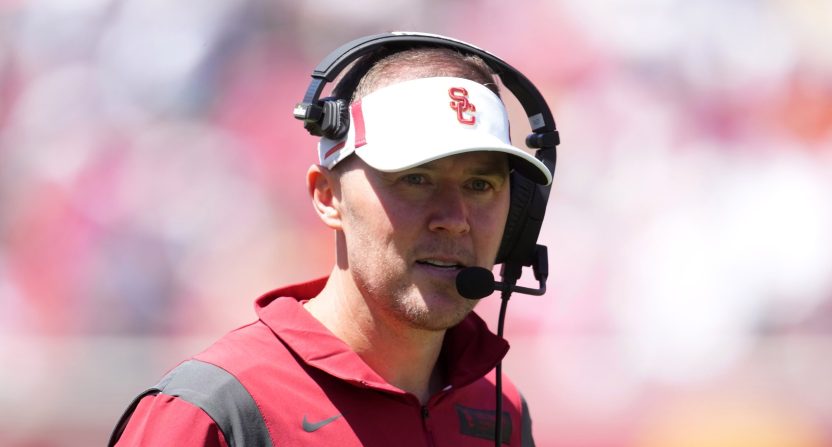 For the first time in a long time, USC has our attention for what it could be on the football field. Lincoln Riley brings coaching star power to a tradition-rich program that has fallen off the national radar in recent years. We haven’t heard this much buzz around the Trojans since the Pete Carroll days, almost 15 years ago when they were a regular fixture in the championship conversation.

How soon will the school be a legit title contender? Could it happen this year? USC is ranked No. 14 in the preseason AP Poll, and VegasInsider.Com has the Trojans as the betting co-favorites to win the Pac-12 along with Utah. Interestingly, the media isn’t quite as high on the Trojans; they’re picked to finish third in the preseason conference poll behind favorite Utah and Oregon.

Thanks to a friendly schedule, USC could be 6-0 when it faces a showdown at Utah in October. Five of its first six games are within the state of California and four are at home. It’s not unreasonable to think that the Trojans could go 10-2 or 9-3 in the regular season. The program has not reached double digits in victories since 2017 (11-3).

Riley adds excitement to #Pac12AfterDark. College football is a much more interesting place when programs outside the South and Midwest are involved in the College Football Playoff picture.

One thing is for certain: Riley’s first season won’t be dull. The quarterback whisperer is a proven commodity. At Oklahoma, he developed two Heisman Trophy winners (Baker Mayfield in 2017 and Kyler Murray in 2018) and a Heisman runner-up (Jalen Hurts in 2019). Mayfield and Murray were No. 1 overall draft picks, while Hurts was a second-rounder. All three are starters in the NFL.

To speed up his transition to the West Coast, Riley hauled in two coveted transfers in quarterback Caleb Williams and wide receiver Jordan Addison. Previously. most first-year coaches didn’t enjoy the luxury of importing this kind of immediate firepower. But thanks to the transfer portal, teams can rebuild faster than ever.

Addison is the addition that rocked the college football world. There was a lot of chatter when the All-American and Fred Biletnikoff Award winner bolted from Pittsburgh. Viewed in isolation, it doesn’t seem totally surprising that he would leave. Addison’s quarterback Kenny Pickett exhausted his eligibility and is now with the Pittsburgh Steelers. Why wouldn’t he join Riley in a wide-open offense?

Still, there were allegations of tampering and speculation that the promise of name, image, and likeness money was used to lure Addison. None of that matters now. USC has arguably the best wide receiver in the nation. Addison caught 100 passes for 1,593 yards and 17 touchdowns. He should be an ideal fit for Riley’s offense.

Williams is the less stunning addition; he played for Riley last year. He saw action a little faster than expected. Oklahoma was supposed to be Spencer Rattler’s team in 2021. But Rattler, who was at one time a Heisman favorite, struggled, prompting Riley to turn to the highly recruited Williams. As angry as Pittsburgh fans were about Addison leaving. Oklahoma fans were livid that they not only lost their coach to USC, but also their prized young quarterback.

In 11 games, Williams showed why he was named the top overall recruit for the Class of 2021 by SI All-American. Williams passed for 21 touchdowns, four interceptions, and rushed for 442 yards and six touchdowns as a freshman. His dual-threat skills have made him among the Heisman Trophy favorites( VegasInsider.Com lists Williams as third behind Ohio State quarterback C.J. Stroud and Alabama quarterback and 2021 winner Bryce Young).

USC still has a lot of questions. A defense that allowed a program-record 31.8 points per game last year needs to be rebuilt. And nobody knows how a suspect offensive line will hold up. But if the offense performs, the Trojans should be exciting to watch. As for the high expectations, Riley is ready to embrace them.

“We didn’t come here to play for second, we are not wired that way,” he said at Pac-12 media day. “We came here competitively to win championships, win them now, and to win them for a long time.”