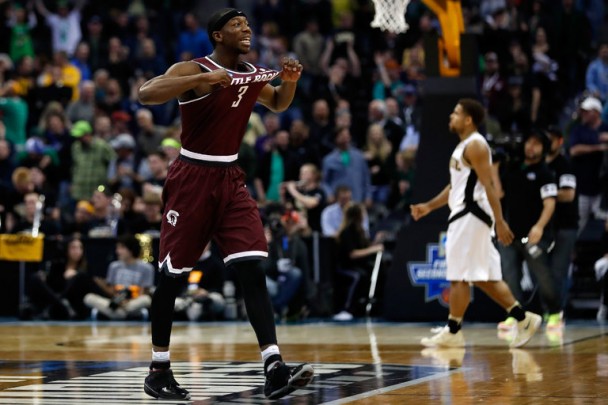 With 4:05 left in regulation on an NCAA tournament Thursday, the Arkansas-Little Rock Trojans were reduced to hope, and little else.

The Sun Belt Conference champions had to hope that nearly every shot would fall; that the Purdue Boilermakers would make mistakes; and that the No. 4 seed in the Midwest Region would miss at least a few free throws.

No one was counting on any of it.

Purdue led, 63-49, and the crowd inside Denver’s Pepsi Center was relatively muted. National television viewers were decompressing from the afternoon session of games and were getting a snack before the first window of night games.

A year ago, Baylor led Georgia State by 10 with 1:40 left and somehow lost, but come on, that simply doesn’t happen in consecutive NCAA tournaments…

The odds indicated as much:

Purdue was a 99.6% favorite at that point. Very rare to blow a lead like that. https://t.co/dAzCZpcMHp https://t.co/L31Mowsv7B

Yet, March is a month for blowing odds and percentages to smithereens.

The Trojans met the moment with skill, not just effort, and soon enough, they whittled Purdue’s lead down to three in the final moments of regulation.

Then this classic March moment unfolded, courtesy of Josh Hagins:

Purdue had the size advantage in this game with A.J. Hammons patrolling the paint, but Little Rock had the biggest-sized stones. Hagins carried and threw most of them, including that long-distance bomb to send the game into overtime.

When Little Rock needed a tying basket down two late in the first overtime period, Hagins was there again:

A kiss to remember.

In the second overtime period, Hagins got a little help from teammate Kemy Osse, who helped the 12 seed carve out five-point advantage over the 5 seed from the Big Ten:

Yet, while the role players on the Trojans helped him, Hagins was going to be the man who either carried his team to the finish line or bore full responsibility for a noble loss.

He chose victory… because his jumper was sound enough to remain pure under pressure:

When it was all over, Hagins had poured in 31 points. Moreover, in the final five minutes of regulation and the two overtime periods, Hagins outscored Purdue by himself, 21-20. Every UALR player helped at the defensive end of the floor, often playing a two- or three-man zone against Hammons so that Purdue’s hammer in the paint could not get free for an easy shot. UALR might have been only 4 of 13 from the field in both overtime periods, but due to the Trojans’ team defense, Purdue was also 4 of 13 from the field. The Boilermakers could not assert themselves as they hoped to.

The Trojans, one through five, all excelled on defense. However, at the offensive end, there was no doubt that Hagins was the man. Purdue knew he was going to shoot, and Hagins still had the final answer for his team, enough to give the 12 seed a lead heading into the final 10 seconds of double overtime.

Purdue did have one good chance at the end of the second overtime, but guard Johnny Hill — part of a Boilermaker backcourt which struggled all season long — clearly stumbled on his way to the hoop. There was no foul by the UALR defense:

No foul, just the deficient point-guard play which hurt Purdue all season.

A miss by UALR on the second of two foul shots with under two seconds left represented a good miss. Purdue was merely able to chuck a prayer from its own end of the court. It didn’t come close, and the upset had been sealed:

The best missed foul shot ever

In 1986, Arkansas-Little Rock joined Cleveland State as one of the first two 14 seeds to ever upset a 3 seed in the NCAA tournament. The Trojans stunned Notre Dame and Digger Phelps in Minneapolis. This win wasn’t as big.

It’s certainly big enough, especially in light of the way it was accomplished.

A 12 seed trailing by 14 with just over four minutes left against a 5 seed?

Not in this month — not for Josh Hagins and Arkansas-Little Rock.