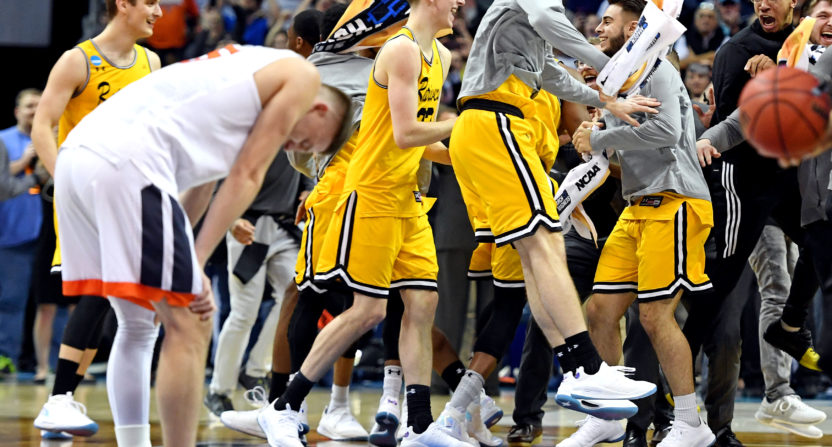 The UMBC Retrievers (a school few people had heard of) just became the first 16-seed to knock off a 1-seed in the NCAA Tournament, with a shocking and dominating 74-54 victory over the Virginia Cavaliers.

This wasn’t about a bunch of crazy bounces going their way or some questionable foul calls: UMBC straight-up dominated Virginia in the second half, winning the half 53-33.

As Jim Nantz and CBS showed on the broadcast, there have been a lot of close calls over the years in these 16-1 matchups, with the 1-seed ultimately getting it done late in the second half to come away with the win.

This was a 21-21 game at halftime, and even when UMBC took a double-digit lead four minutes into the second half, I think we all were expecting Virginia to make their run, because that’s what we’ve always seen happen in these games.

But UMBC remained up double-digits for the entirety of the final 15 minutes, and finished with their biggest lead of the game. It was total domination to close out the game, against a 1-seed that was favored by 20.5 points.

After the game, Charles Barkley, Kenny Smith, and Clark Kellogg talked about where this game ranks for college basketball’s biggest upsets, and all agreed this one “goes to the top of the list.”

It’s certainly hard to argue with that, when we’ve literally never seen a 16 top a 1.

With the victory, UMBC moves on to face No. 9 seed Kansas State in the second round. Win or lose that game, UMBC will be the biggest story of the tournament, and a story college basketball fans will be talking about the rest of our lives.