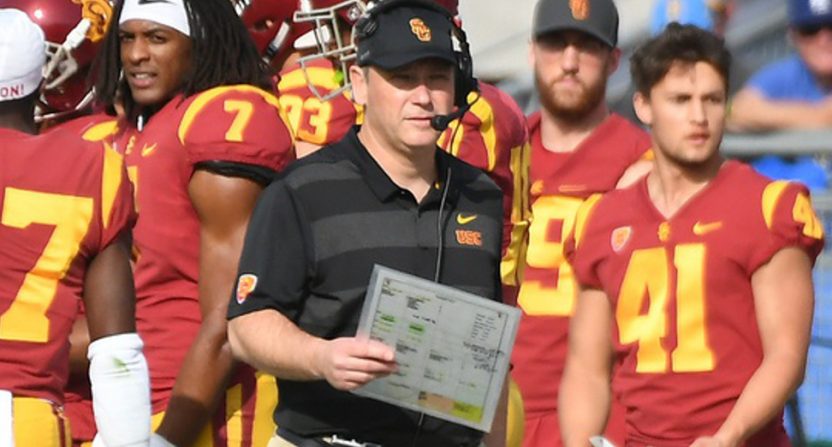 The writing could potentially be on the wall for USC head coach Clay Helton. On Saturday, the Trojans lost 34-27 to a UCLA team that had won two games all year under new head coach Chip Kelly, and they were outscored 13-0 in the fourth quarter. That loss dropped them to 5-6 on the season, and the questions about Helton’s future with the Trojans reached 11 on the volume dial after gradually growing louder and louder as the season has rolled along. Helton’s time at USC may be running out of time if the USC Twittersphere was any indication Saturday.

#USC will lose to a 2-8 #UCLA squad and now have to beat undefeated Notre Dame just to make a bowl game.

There is no way Clay Helton should be back next season.

When USC loses to ucla but Clay Helton is about to get fired lol smh #FightOn ✌ pic.twitter.com/O5N3kf72mI

As Clay Helton was walking up the ramp exiting the stadium, someone yelled, "You suck Helton. Go back to Western Kentucky!"

The hot takes were expected to be flying, as this was the first time USC lost to a team with eight losses since Nov. 26, 1960. That was the first season coached by John McKay, when the Bruins ended the year with a record of 4-6. And that one was a loss to Notre Dame, who ended the year 2-8. Interestingly enough, this loss also means USC has to beat No. 3 Notre Dame next week in order to qualify for a bowl game.

This is a program trending in the wrong direction right now. Helton took over the Trojans in the midst of the 2015 season when Steve Sarkisian was fired after a 3-2 start. After going 5-4 that year and being retained as the full-time head coach, his USC team played their way to a No. 3 finish in 2016 with a Rose Bowl victory against Big Ten champion Penn State and followed that up with a Pac-12 championship season in 2017 that ended in the Cotton Bowl with a loss to Big Ten champion Ohio State. After losing a number of key players to the NFL, it was expected USC would take a step or two back this season, and they certainly have. What has been disappointing is this year’s USC team hasn’t shown any signs of progress as the season has gone on, and that has led them to being on the brink of being ineligible for a bowl game for the first time since 2011 (when USC finished the year 10-2 but on postseason probation).

USC is in jeopardy of finishing below .500 for the first time since 2000. That was the final year with Paul Hackett as head coach, which was followed up by Pete Carroll and a wildly successful run for the program. Like Helton, Hackett was the head coach for three full seasons before the call to change the head coach. Considering USC Athletics Director Lynn Swann wasn’t the one who hired Helton, it is easy to see why a coaching change may be imminent for the Trojans. Swann will be under pressure to make the right decision for the good of the program. If he sticks by Helton’s side, then he must face the criticism that comes with a bowl-less season.

The conventional thinking is USC should not accept what is going on at USC, and should the job become open it would be one that attracts some good coaching candidates. It absolutely would spice up the offseason coaching carousel if Helton was let go, and it would instantly become the biggest hire Swann has had to make since being named the AD of the school.

Had this just been another random loss for USC, it would have led to plenty of criticisms. But the fact this came against crosstown rival and new head coach Chip Kelly makes things a little more tense for Helton, Swann, and USC. In his first year on the job at UCLA, Kelly managed to score a victory in the crosstown rivalry and sell to recruits that his team has been improving as the season has gone on (and yes, they have). UCLA may still have a bunch of work to do, but a win against USC means these two programs are much closer to playing on the same field than they were this time a year ago. And now that Kelly and the Bruins are chirping with city bragging rights for the next year, a change on the USC sideline could potentially be accelerated. The Los Angeles Times is already wondering if we have witnessed the final head-to-head matchup between Kelly and Helton.

Helton may get one more game, but a loss to Notre Dame could be his last as the head coach of the Trojans. Such is the reality of the game these days.