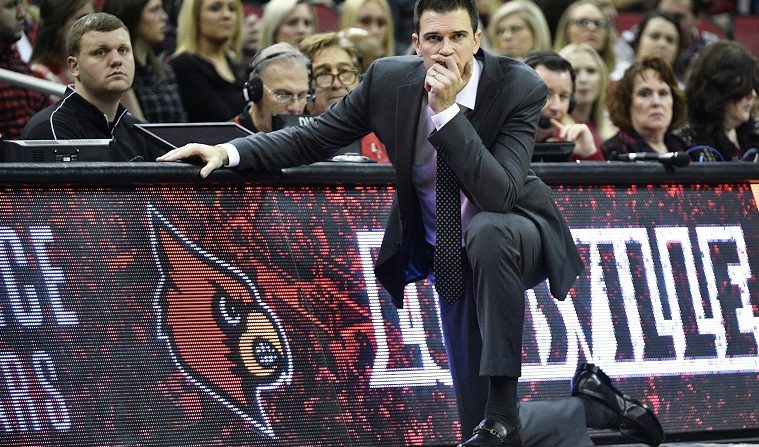 At a time when the University of Louisville is starving for leadership, there’s a famine.

The Cardinals lead the nation in interims: interim school president, interim athletic director and interim basketball coach. University 6 finds itself in this triple crown of uncertainty because of the FBI basketball investigation which resulted in the termination of Rick Pitino and athletic director Tom Jurich – former campus sacred cows.

For now, the games go on. Louisville (16-5, 6-2) and is in sole possession of second place in the Atlantic Coast Conference and could close within 1.5 games by Wednesday when it plays at Virginia (20-1, 9-0). This is it. Your back’s to the corner, Cardinals. You’re playing for this season and you’re playing for interim coach David Padgett’s job.

Every game is hyper-analyzed. Every coaching move scrutinized. Has Padgett done enough to keep the job full-time? It’s like we’re watching some reality TV show play out in real time. Padgett is the underdog contestant who is easy to root for. Louisville is his alma mater, and he was promoted to his current gig because of Pitino’s ouster. Wouldn’t it be a wonderful story if Padgett was hired as the Cardinals’ regular head coach?

Perhaps, but one thing is clear: Louisville leadership can not afford to be myopic. Many people are evaluating Padgett strictly on this season’s record. As if a certain number of victories coupled with a deep run in the NCAA Tournament will guarantee him a permanent job. That’s nearsighted, wrong and unfair.

If David Padgett doesn't get the Louisville gig after this year, there better be multiple mid majors on the phone for him

It’s understandable why a fan might look it at that simply. Leadership should not. Padgett may or may not be the right fit, regardless of this team’s record. But to make this decision primarily on the basis of his winning percentage for a team that he was just handed the keys to five minutes ago isn’t nuanced and shows a lack vision and leadership.

Louisville, warts and all from its NCAA issues, is still a Top 10 job. It is the most valuable basketball program in the country. It has an NBA-quality home arena. It’s among the national leaders in attendance every year. And the TV ratings here are stratospheric. Is the job as attractive as it was a few years ago, pre-scandal? Of course not, but it’s still a place where you can win a national championship.

The previous two Louisville coaches are both in the Hall of Fame and both — Denny Crum (1980, 1986) and Pitino (2013) — led the Cardinals to NCAA titles. That’s the standard. That is what the next Cardinals coach will be and should be expected to deliver. No excuses. None. He will be tasked with navigating the program through this NCAA mess and he will be handsomely rewarded financially.

Not next year. Remember, the FBI has to finish their investigation before the NCAA even starts its. The FBI investigation, especially if it's ongoing & ensnares more schools, is going to take awhile. So, I think, unless UofL punishes team next season, hammer may not hit till 2020 https://t.co/F0YI48DgpR

If you think these expectations are unreasonable or out of whack given the Cardinals current predicament, you’ve never been to Louisville. And you have no idea what Louisville basketball means to this community.

The Cardinals leadership has an obligation to its donors and fan base to seek out the best qualified candidate for the job. That doesn’t necessarily exclude Padgett. What it does mean is opening up the job to a full national search. Recently, the school reversed course and announced that it will use a search firm to seek out a permanent athletic director. That AD presumably will have a significant say in hiring the next basketball coach.

The next AD must call as many big-name coaches as possible. Realistic candidates include Wichita State’s Gregg Marshall or Xavier’s Chris Mack. A Hail Mary candidate might be Billy Donovan if he’s ousted by Oklahoma City or grows tired of getting his head kicked in by the Golden State Warriors.

Marshall might be the best coach outside of the Power 5 and Big East. He took the Shockers to the 2013 Final Four and an unbeaten regular season in 2014. Mack got the Musketeers within a game of last year’s Final Four. If Donovan leaves the NBA, he will automatically become the biggest college coaching free agent in America.

If Louisville does go for an external candidate, that person will have a far more substantial résumé than Padgett. More experience, more data on which to make an informed decision. If it’s Marshall, Mack, Donovan or someone else with bonafides, even the most ardent Padgett supporter couldn’t argue against that. The assertion that Louisville is in no position to attract a brand new coach is nonsense.

What we don't know – how much money is available for Louisville's new basketball coach? 2M/yr? 3M/yr? 4M/yr? 5M/yr?
That number is crucial to knowing who should be in the "Louisville's next coach" discussion.

Again, this is about making a long-term decision. Any coach who is serious about winning a national championship recognizes everything that Louisville has to offer. Whatever sanctions the NCAA dishes out – short of the death penalty – will be temporary setbacks. This is not college football, where you need years to bring in great players to build a big winner. In college basketball, you’re always one premiere recruiting class from being in the NCAA title mix.

But let’s say for argument’s sake that those factors cannot convince a big name to come to town. Or let’s say they believe that the best possible candidate is in-house. Louisville needs to be convinced that Padgett is a future Hall of Fame caliber coach who just needs seasoning. It should not hire Padgett if they believe he’s merely a placeholder until its NCAA troubles are over.

If you’re going to use this season as a barometer, it’s difficult to assess Padgett. He took over a team that was a preseason Top 25 team (No. 16 in the Associated Press poll). The Cardinals are now currently unranked. They were picked to finish fifth in the ACC with one preseason all-conference player: Quentin Snider (second team). So far, they have exceeded league play expectations, but how much of that is directly attributable to Padgett?

If you believe winning close games can come down to coaching, Louisville has played in five games that either went into overtime or were decided by three points or less. They are 2-3 in such contests and are No. 104 in the Ken Pom “Luck” category, so the Cardinals haven’t been substantially lucky or unlucky.

Sometimes, a team’s record can be inflated or deflated due to random chance, a bounce, a missed block out, etc. That doesn’t seem to be the case. The Cardinals’ record seems to reflect who they actually are.

Padgett was brought in to stabilize a program rocked by scandal on the eve of the start of basketball practice. He’s cobbled together a staff and will guide the team for at least the next few months.

If Louisville chooses Padgett, then it must do so by looking behind just the win-loss record of this season. The NCAA Tournament, where you have single-game elimination, can be kind of random. Do you entrust the future of the University of Louisville’s flagship athletic to an unproven coach based on a few wins in March?

If you decide to keep Padgett, you must believe that’s in the best interest of the program. You’re betting long on a guy whom you believe will be the next great coach. There is little tangible evidence based on Padgett’s background that suggests this should be the case.

If Padgett became a free agent today, there is not a single Top 25 program outside of Louisville that would offer him a head coaching job. But no one knows Padgett better than Louisville. Cardinals leadership has to be armed with convincing information that Padgett is a star coach in waiting and is worth giving him time while the school navigates through the NCAA mess.

Yes, hiring Padgett would be a risk. But that’s why leadership exists: to make tough decisions, to have vision and see value where others don’t.